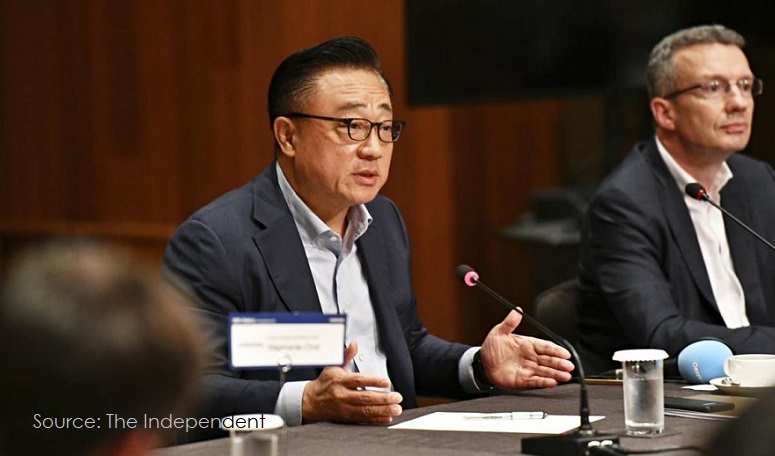 Shortly after, Samsung's President and CEO of IT & Mobile Communications Koh, Dong Jin, known as DJ Koh, held a meeting with select local media outlets in Seoul and the UK's The Independent. Koh and company repeated the message that Lee Jong-min had earlier that week that "the foundation of the smartphone of tomorrow would overturn expectations and set the industry on a new path."

Koh admitted to those present in the press room that "It was embarrassing. I pushed it through before it was ready."

Koh added that "I do admit I missed something on the foldable phone, but we are in the process of recovery."

Samsung’s head of global marketing strategy, Stephanie Choi, stated in the meeting that "Our brand philosophy is "We make what can’t be made, and do what can’t be done," and unfortunately the Galaxy Fold issue is sometimes a part of this process."

Kang Yun-Je, head of Samsung Electronics' design team entered the conversation and stated that "Smartphone design has hit a limit, that’s why we designed a folding phone. But we’re also focusing on other devices that are beginning to make a wider impact on the market, like smart earphones and smart watches. In five years or so, people will not even realis they are wearing screens. It will be that seamless."

When asked whether he foresees a future without smartphones, Koh suggested the Galaxy Fold could be the beginning of the end. "Foldable will last a couple of years, though another form factor is a possibility."

Koh added that the emergence of 5G and the internet of things begin to take hold, people will be thinking smart devices rather than just smartphones.

Koh then pointed out that "At the moment, more than 2,000 devices are being tested right now in all aspects. We defined all the issues. Some issues we didn’t even think about it but thanks to our reviewers, mass volume testing is ongoing."

It has been months since the Galaxy Fold was meant to go on sale, yet there has been no new release date revealed. Since that time both Best Buy and AT&T cancelled pre-orders.

Koh was adamant at the press meeting that its arrival is a matter of when, not if, but refused to be more specific. Koh did say that "In the last couple of weeks I think we defined all of the issues and all of the problems we couldn’t find [before sending to reviewers]."

When pressed to give even a rough idea of when it can be expected, he borrowed an expression he said he learned during his time spent studying in England – "in due course." he said. "Give us a bit more time." For more on this, check out The Independent's report.

I must say that it was refreshing to hear a CEO take it on the chin and admit fault. So many CEO's today distance themselves from problems, bury them in hard to find support pages or deny there's even a problem. Sound familiar?