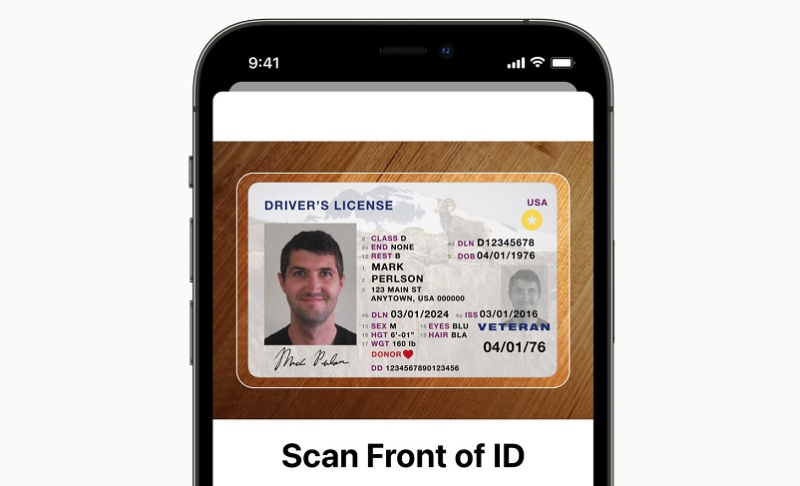 Prior to Apple introducing Digital ID for Wallet at WWDC 2021, Patently Apple posted at least three patent reports on this project starting in September 2020 (01, 02 and 03). Today the US Patent & Trademark Office published a new patent application from Apple relating to Digital ID titled "Secure Sharing of Credential Information."

The credentials may include any suitable information (e.g., payment information for a credit card, unique account identifiers for electronic passes or tickets, etc.) useable to access a resource (e.g., payment funds, entrance to a venue associated with the ticket, access to entertainment at an amusement park, etc.). The credentials may be stored in secure elements on the user devices. A credential once stored in a secure element may be used to conduct contactless transactions (e.g., wireless communication with near field communication devices), which may include payment for goods and services, event and venue access, user identification, and the like.

In a particular use case, a user may purchase, on behalf of a group of friends, electronic passes to an amusement park that includes near-field ticketing and debiting technology. Such technology may enable users to "tap" their mobile devices to reader devices (e.g., conduct a contactless transaction) to enter and exit the park, purchase items within the park, obtain access to rides and shows, etc.

Such technology may require that each user device include its own unique credential that is associated with the user's respective electronic ticket. In this manner, the tickets may uniquely identify each friend in the group.

Once activated, the friends can use their respective user devices to interact with the near-field ticketing and debiting technology, and because the credentials are unique to the accounts of the friends, the first user is not responsible for purchases of the friends.

As an additional technical advantage, the techniques described provide a more efficient process for provisioning credentials on remote devices. In particular, this process requires fewer click throughs, page views, data input at data input fields, and the like, as compared to conventional approaches. For example, in at least one example use case, a parent may send a credential to their child's watch and the child may be able to enter an amusement park by tapping their watch to a reader at the park without the child having ever interacted with a provisioning user interface at their watch. In this manner, the credential may be automatically provisioned on the child's watch without any input from the child.

Apple's patent FIG. 1 below illustrates a block diagram 102 and a flowchart showing a process 100 for provisioning credentials for use on user devices. 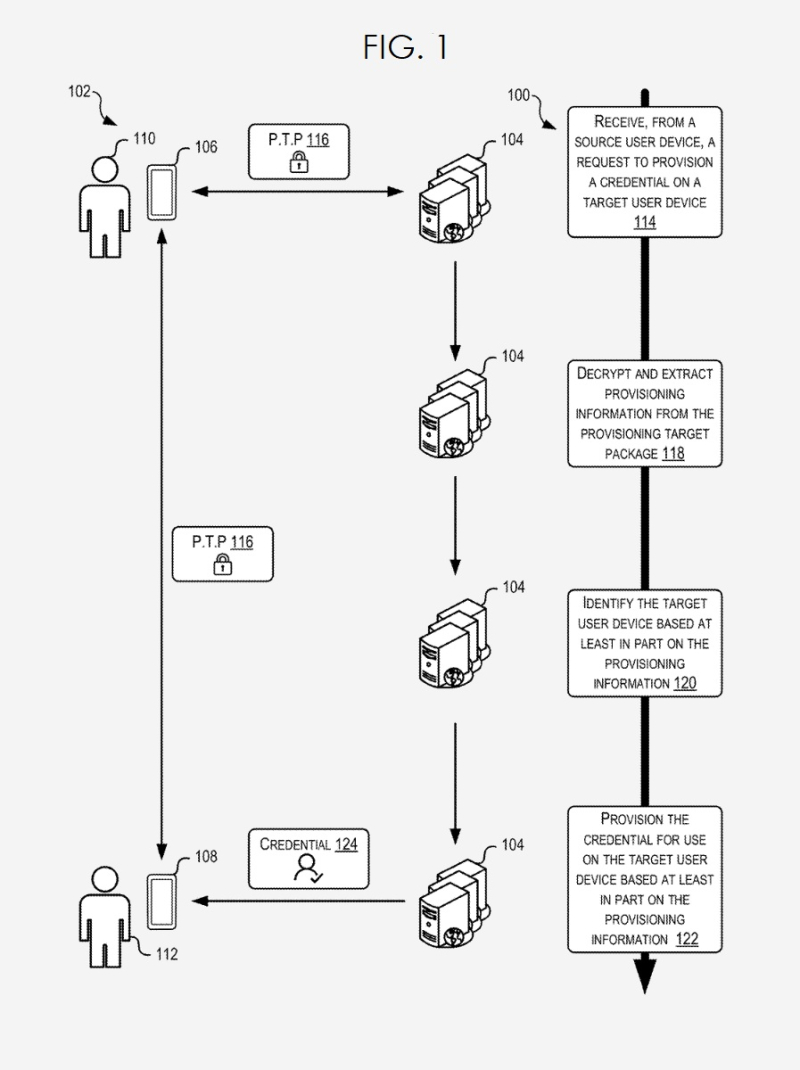 Apple's patent FIG. 2 below illustrates a block diagram showing an example architecture or system 200 for enabling provisioning of credentials for use on user devices. 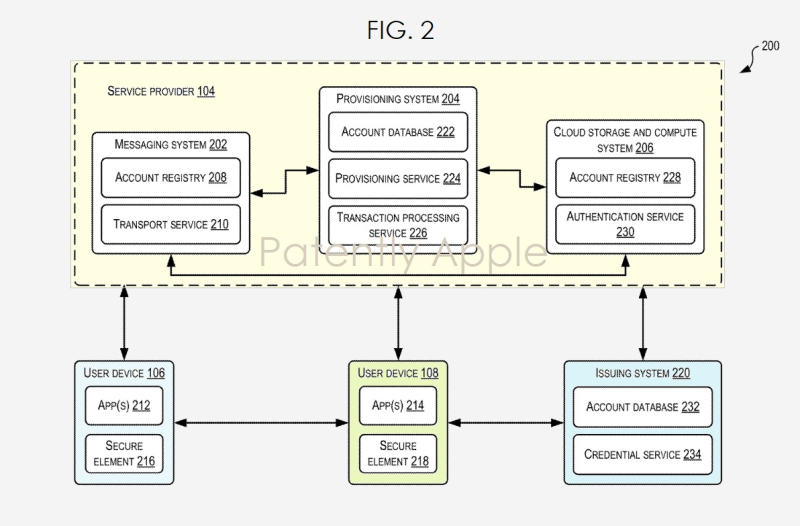 Apple's patent FIG. 3 and 6 below illustrates example user interfaces for provisioning credentials for use on user devices. 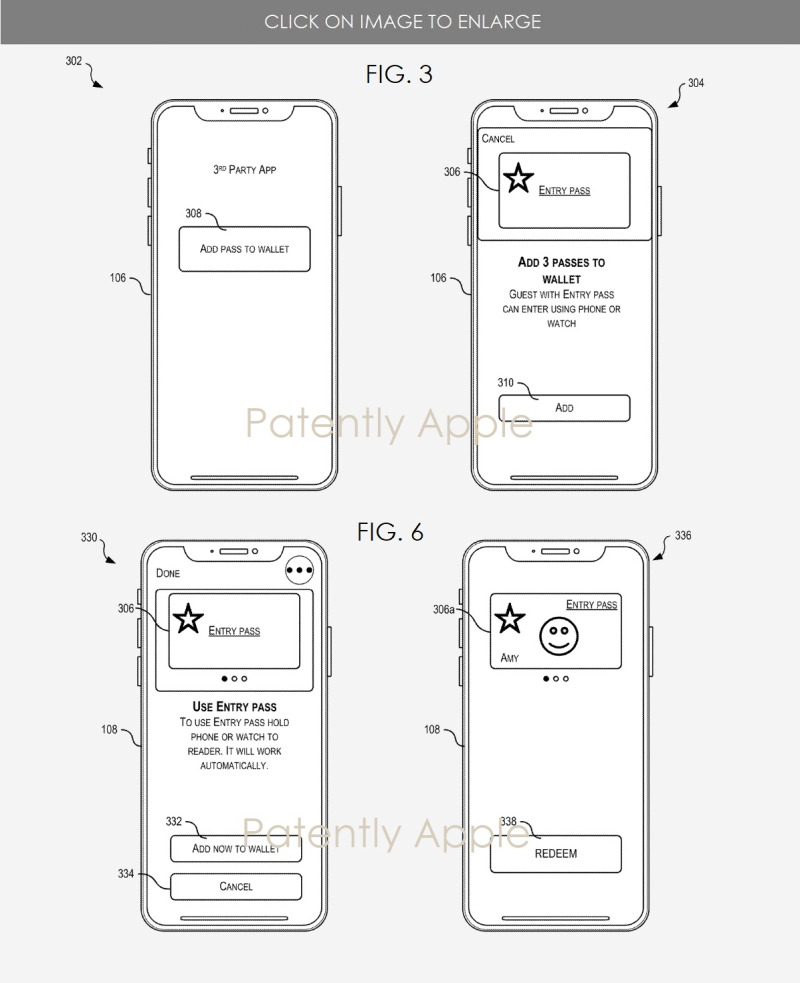 Three additional patent filings regarding Digital ID were published today by the U.S. Patent Office. The first is titled "Configuring an Account for a Second user Identity." Review patent application 20210374744 for details. The second patent application is titled "Sharing and using Passes or Accounts and the third is titled "Creation of Restricted Mobile Accounts."