An Apple ID Credentials System for checkpoint security at airports shows a deep link to the U.S. Department of Homeland Security 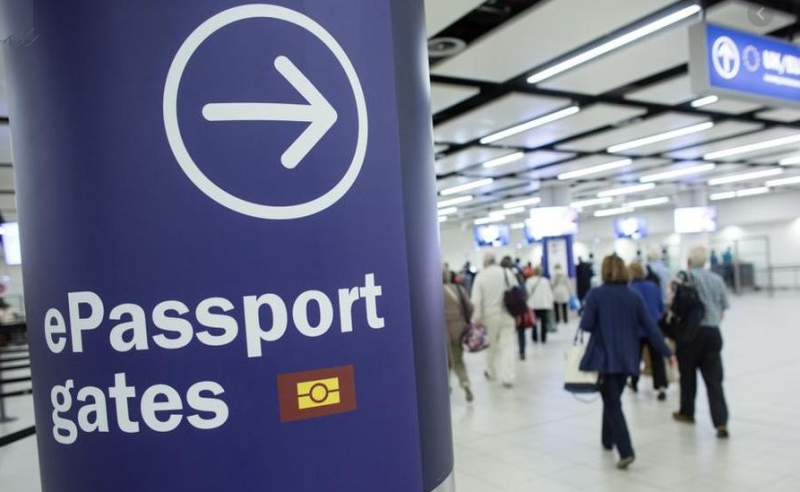 On Thursday the US Patent & Trademark Office published a patent application from Apple titled "Checkpoint Identity Verification Mobile Identification Credential." When looking up the patent inventors, I couldn't find one listed as working for Apple. What are the odds of that? Digging deeper, all of inventors were linked to the U.S. Government "as represented by the Secretary of Homeland Security." One segment of the patent states: "Statement of Government Interest: The present invention was made by one or more employees of the United States Department of Homeland Security in the performance of official duties. The U.S. Government has certain rights in this invention."

On the surface, it would appear that Apple Pay's new ID credentials is important to the U.S. Government and Homeland Security. This patent could raise eyebrows for those who depend on Apple for privacy. Activists like Edward Snowden, who railed against Apple's photo-scanning plan, will likely find this latest connection between Apple and Homeland Security troubling.

On the flipside, having an ID Credential program should ensure that Apple is properly vetting those trying to get a digital ID so that terrorists and illegals don't get credentials they're not supposed to attain so as to protect airports and other points of entry into the U.S. and beyond. This is also crucial in creating a digital passport that other governments will need to rely on at international airports.

Apple's patent background states that staffing and computing resources are devoted to verifying the identity of a subject (also referred to herein as a user, passenger, or traveler) at a security checkpoint. Such staffing and resources are further burdened by a need for manual verification performed by an agent, who checks physical documents from the subject, and checks other sources of information available for the subject.

Such resources are even further burdened when attempting to resolve inconsistencies between a subject's travel booking/reservation information, physical documents, and/or identity information. Furthermore, the subject is burdened with a need to check-in with a travel carrier such as an airline, in addition to undergoing the checkpoint experience.

Apple's patent further notes that in an environment that supports its use, a Mobile Identification Credential (MIC) can enable a user to conveniently prove their identity. One embodiment of a MIC is a mobile driver license (mDL) issued by an official agency such as a state Department of Motor Vehicles (DMV).

Another embodiment of a MIC is a mobile passport. A mobile passport may, for example, be issued by the U.S. Department of State or a foreign ministry of another nation. The MIC can include various information, such as information relating to identity or privileges pertaining to the user.

The MIC itself is portable and can be provisioned to devices. Below, the device to which the MIC is provisioned is referred to hereafter as a User Mobile Identification Credential Device (UMD). The term UMD pertains to any device to which a MIC can be provisioned including, without limitation: smart watches, smart fitness bands, smart objects, smart phones, e-readers, tablet computers, smart televisions and displays, smart cameras, laptop computers, desktop computers, servers, kiosks, chips, flash drives, and USB drives.

A MIC may be validated by an Authorizing Party (AP). In one embodiment, the AP is an official agency such as a state DMV. In another embodiment, the AP is a third party empowered by an official agency to perform such verification operations. The AP employs an Authorizing Party System (APS). The APS may provision the MIC to the UMD.

It stands to reason that this is a technical patent which covers the following:

Apple's patent FIG. 1 below illustrates a MIC environment #10 including a security checkpoint kiosk RPS #100 to obtain authorization of MIC user information #40 according to an embodiment. Briefly, benefits include providing an increase in the efficiency of security checkpoint operations, such as at airline security areas, by enabling a passenger (referred to alternatively as user or traveler) to prove their identity using a MIC #210. 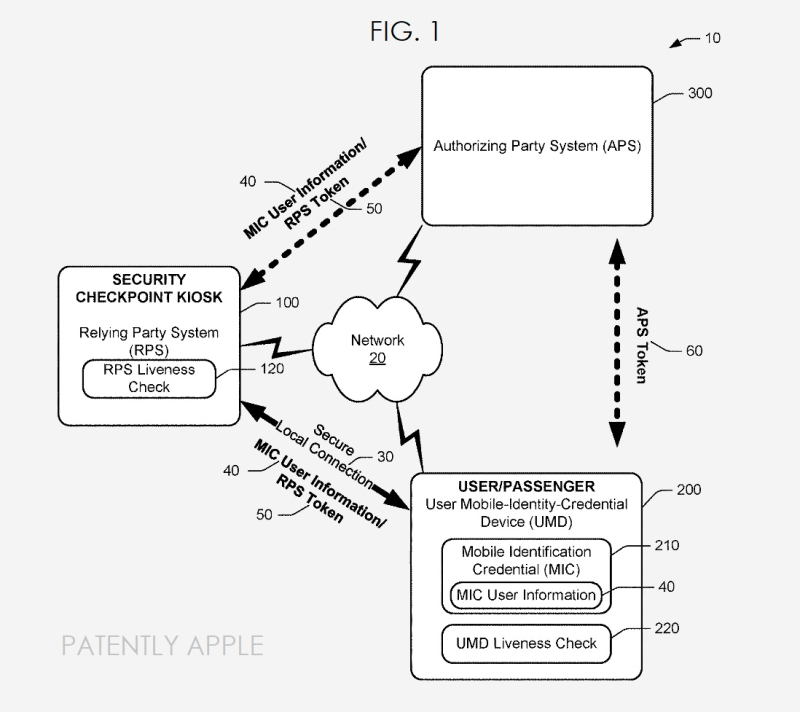 In addition, the MIC provides readily-accessed, official biographic and biometric information, which reduces the need for network traffic and facilitates cross-checking with airline-supplied manifests.

Furthermore, the MIC supports automated verification of the passenger at the security checkpoint via kiosk RPS, and thereby improves utilization of security staffing resources. 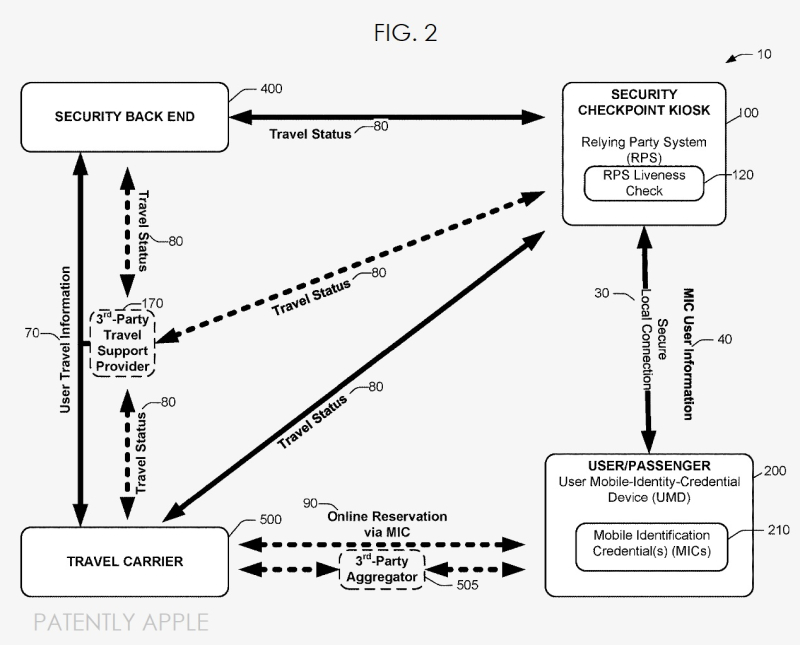 For example, the checkpoint RPS #100 completes verification of the passenger's identity and directs the UMD #200 to prompt the user with a reminder to check in with a travel carrier. In another embodiment, the security checkpoint kiosk RPS facilitates an automated transaction to check in the passenger, or may selectively relay verified passenger information to airline data systems, travel carriers, security back ends, or other parties. In such embodiments, there is no longer a need for the passenger to separately check in with the airline. 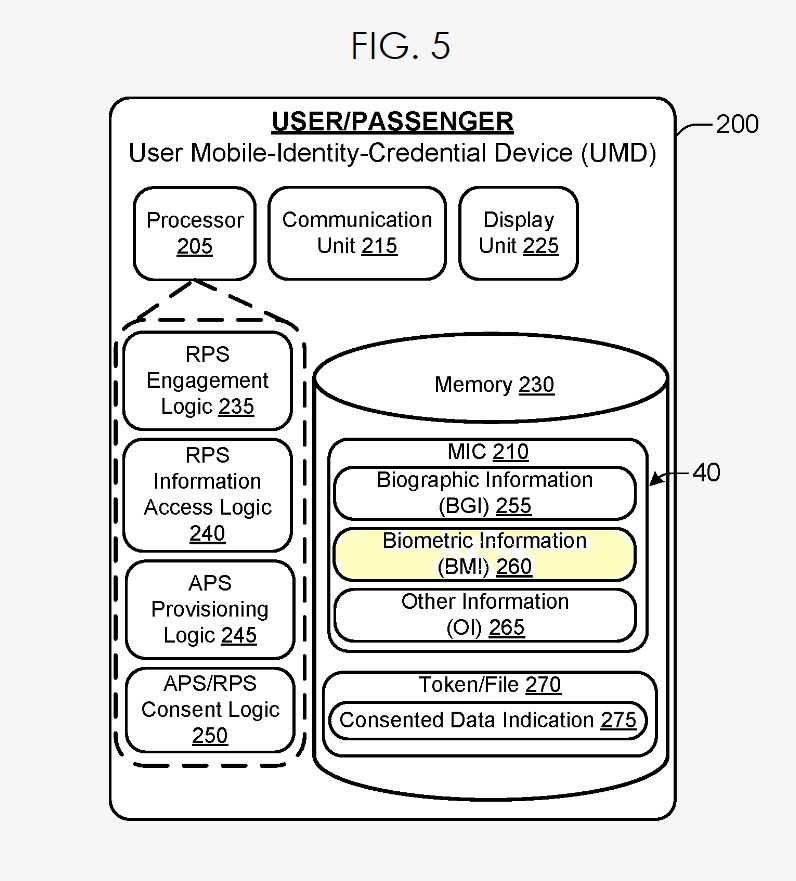 Apple's patent FIGS. 18 and 19 below illustrate a privacy dialog #1800 that enables interaction between a user and the UMD #200, enabling the user to grant selective consent to release of MIC user information. In embodiments, the UMD provides the privacy dialog via APS/RPS consent logic running on the UMD. 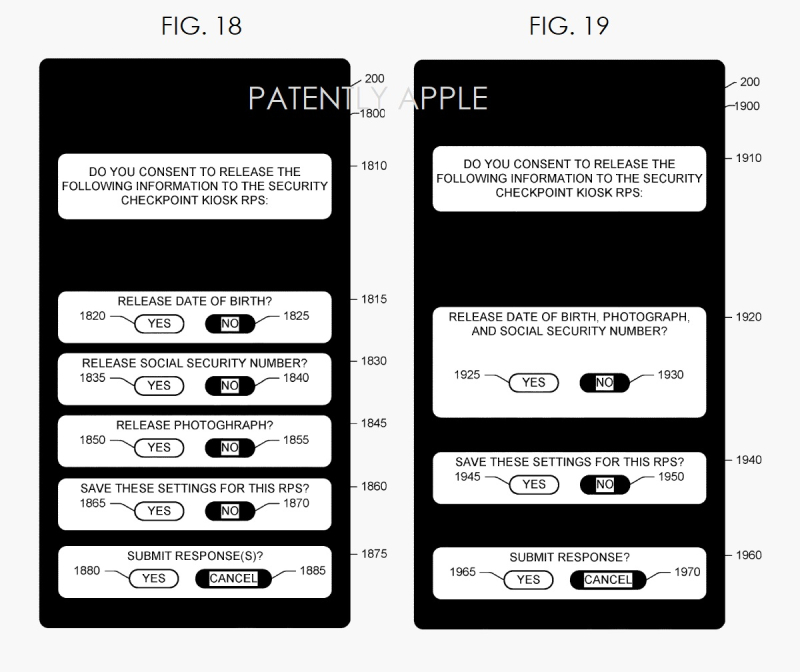