Home Archives Contact Us Subscribe Twitter MeWe Facebook Patently Mobile
Apple wins patent for a Foldable Device that could present content in one large image or Split Screen & double as a Notebook-Like Device
Apple may run into a tight supply situation with Wi-Fi 6E for iPhone 14 and their First Head-Mounted Device, according to Ming-Chi Kuo

Qualcomm is looking to seriously beef up its PC processors, with the company announcing plans for a next-generation Arm-based SoC "designed to set the performance benchmark for Windows PCs" that would be able to go head to head with Apple’s M-series processors, reports The Verge.

The report added that "Dr. James Thompson, Qualcomm’s chief technology officer, announced the plans for the new chips at the company’s 2021 investor day event, with the goal of getting samples to hardware customers in about nine months ahead of product launches with the new chip in 2023."

Below is a brief video clip from Qualcomm's event held earlier today that touched on their coming Arm based PC GPU developed by the Nuvia team that Qualcomm acquired back in January.

Qualcomm is behind schedule, as Qualcomm's CEO stated in July that they would have a laptop chip ready to compete with Apple's M1 by 2022. Now only sampling will be done in 2022 and the finished chip launching in 2023.

On the flipside, Apple's M1 will further advance in 2022 as they will reportedly introduce an M1-X chip for their higher end Pro Desktop. 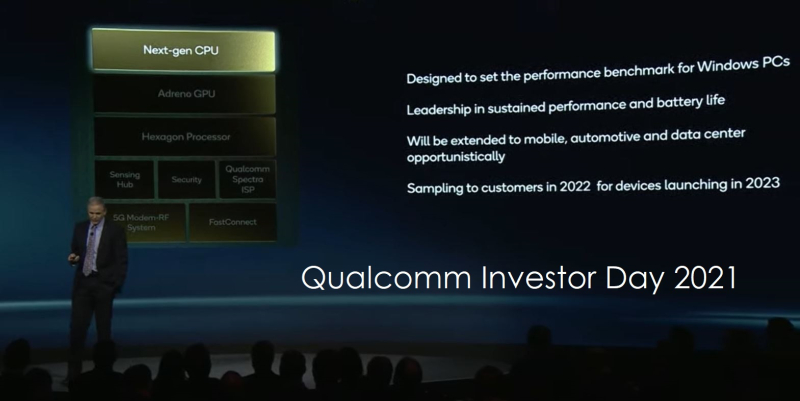 The Verge added that "The company is making big promises, too: in addition to offering competition to Apple’s stellar M-series chips (which power its latest MacBook Pro and MacBook Air laptops and iMac and Mac Mini desktops), Qualcomm is aiming to lead the field for "sustained performance and battery life," too – something noted in our video clip.