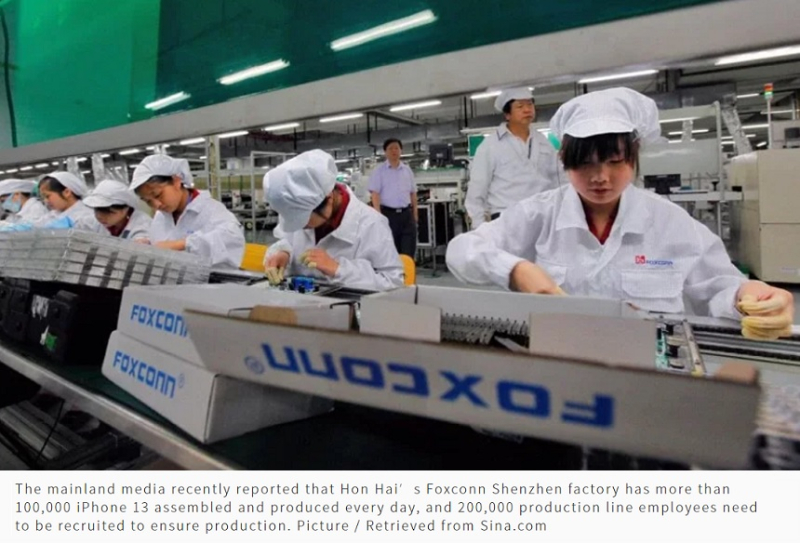 Chinese media recently reported that Hon Hai's Foxconn Shenzhen factory has more than 100,000 workers assembling Apple's iPhone 13 but requires 200,000 in order to keep production lines humming at their Zhengzhou plant. At present, no large-scale recruitment has started to bring in the added 100,000 workers after the long October holiday.

The power curtailment measures in many provinces in China continues, and Foxconn, a subsidiary of Hon Hai Group, has attracted much attention to the progress of manufacturing and assembling the iPhone 13 series in the Chinese plant.

Chinese media reported last week that from October 1st to the 4th, the Foxconn Shenzhen campus dispatched electricity from other special lines to ensure normal electricity consumption during the long October holiday, which did not hinder the progress of Foxconn's mass production.

After the iPhone 13 series went on sale on September 24, the report pointed out that more than 100,000 iPhone 13 series are assembled and produced every day in Foxconn's Shenzhen business group, and Foxconn employees work in shifts day and night.

Whether Foxconn is spreading out iPhone 13 production at various locations throughout the country to ensure production stays on track during the power crisis is unknown as Foxconn won't confirm such activity.

Apple, however, seems to be the most resilient and has been the least affected by the shortage of AP (application processor) to date. According to industry analysis, Apple iPhone is relatively strong in bargaining and purchasing from suppliers. Compared with other Android brands, it has a stronger ability to ensure supply.