A new analytical report by Counterpoint looks at the benefits of the new M1 Pro and M1 Max SoCs, released on October 18 along with the updated MacBook Pros carrying these SoCs. These launches come around one year after the introduction of the M1 Mac.

Veteran Counterpoint semiconductor industry analyst Brady Wang's new report covers how Apple has mastered both its software (OS and APP) and hardware system architectures, thanks to its years of experience in designing RISC SoCs for its smartphones and tablets. The success of the M1, Apple’s first high-performance SoC for entry-level Macs, prompted the company to accelerate the development of more advanced SoCs.

Unlike Intel’s general-purpose processors, which can be used in different notebook models and brands, Apple’s M1 series SoCs are an ASIC (application-specific integrated circuit) that can be only used in Apple-designed PCs. The M1 Pro and M1 Max SoCs have more high-performance cores. However, the number of high-efficiency cores is reduced to two from the M1’s four. Both are made by TSMC’s 5nm technology. 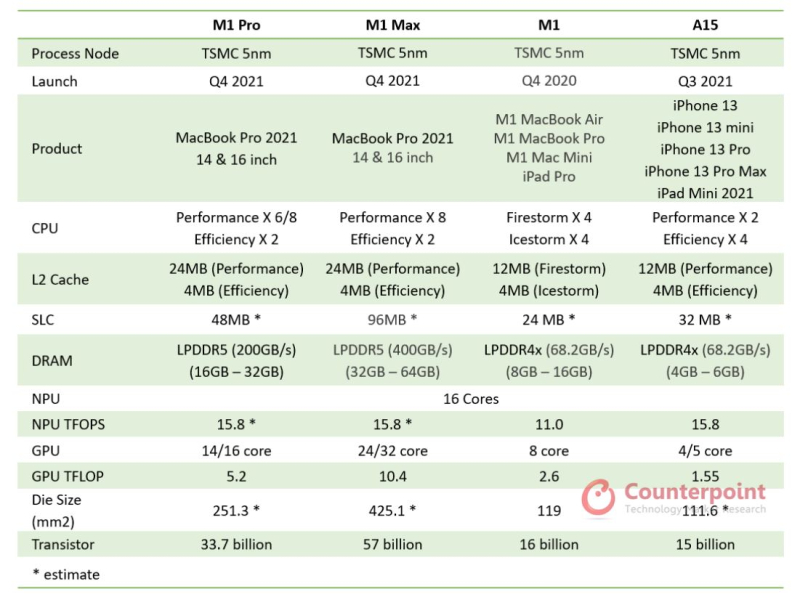 Apple did not share any information about the new CPU core or frequency. According to information presented by TSMC at the 26th Technology Symposium, the N5P is 5% faster and 10% more energy efficient than the N5, although the transistor density has not improved as a result. The M1 Pro and M1 Max, according to Apple, have a transistor of 33.7 billion and 57 billion, respectively. As a result, the die size of the M1 Pro and M1 Max will be close to 251.3 mm2 and 425.1mm2, respectively. Both have broken die size and transistor count records for Apple’s products.

This evolution of the M series chips is in line with Apple’s processor development strategy. Working closely with TSMC, Apple will see significant chip improvements every two years. In addition to the Ax chips for smartphones, Apple also created M series chips for PCs in 2020, with the goal of replacing all Intel CPUs with Apple Silicon within two years. The SoC architectures in iPhones, and iPads and Macs are similar but the Mx for PC has more cores and larger cache memory. In other words, Apple’s latest and most advanced processor will be the Mx for PCs instead of the Ax for smartphones. Ax will inherit the features and innovations of the Mx and become its customized version.

From the die shots of both the M1 Pro and M1 Max from Apple, the SLC is estimated to reach 48MB and 96MB, much larger than the 32MB of the A15 Bionic and the 24MB of the M1. Apple has boosted the cache capacity to improve system performance while lowering power consumption at the cost of die size. To enhance system efficiency, this SLC can be shared among multiple SoC subsystems (like CPU and GPU cores). Further, the bigger cache can reduce the frequency with which the SoC accesses DRAM, lowering system power consumption, requirement for DRAM and, in turn, the BOM.

Apple has been expanding its APIs for new applications including gaming, ray tracing and augmented reality/virtual reality. All these applications necessitate SoCs with several cores that communicate and collaborate with one another, as well as huge system caches to improve responsiveness.

GPU is the key to demonstrating the capacity of new chips. The M1 Pro and M1 Max have 16 and 32 GPU cores, respectively. GPUs, unlike CPUs, are made up of a large number of tiny cores. Initially, GPUs were designed to speed up specific 3D graphics operations but they are now capable of rendering increasingly realistic 3D visual effects, such as light tracing. Since the introduction of 3D graphics, light tracing has been one of the most significant advancements in the field of graphics technology. It is also a crucial technique for designing AR/VR/XR scenes. Light tracing, which may be utilized in embedded segments such as mobiles, wearables, gaming and automotive, is now critical to the realism of any 3D environment.

The GPU of the M1 Pro has 16 cores and only 5.2 TFLOP. However, Apple claims that the M1 Pro’s GPU delivers comparable performance within certain power consumption to the discrete GeForce RTX 3050 Ti 4GB while using 70% less power. Counterpoint believes this is due to the SoC’s huge quantity of shared cache in both Level 2 cache and SLC. Furthermore, the GPU can make use of the shared 32GB of LPDDR5, which is significantly more than the RTX 3050’s 4GB of GDDR6.

Ray tracing is a technique that was heavily emphasized at the Apple Worldwide Developers Conference (WWDC) in 2020 and 2021. At the 2021 WWDC, the training related to its inclusion in gaming accounted for 32.4% of all technological training sessions, making it the top training topic. To fully realize the capabilities of ray tracing, these APIs require GPU support.

The GPU may also be utilized as a more flexible parallel processor, supporting a wide range of AI applications. At the 2017 WWDC, Apple announced Core ML, which allows developers to create tethered applications for Apple devices. GPU support is required for Core ML. Specific applications such as AR, gaming and imaging are among the applications that Apple will emphasize currently and in the near future.

Apple’s M1 Pro and M1 Max meet the company’s requirements for a multitasking, high-performance and power-efficient mid-to-high range laptop. According to Counterpoint estimates, Apple Silicon is currently powering 93% of Macs. As new chips are launched, this proportion will continue to grow.

Apple’s new Macs are intended to appeal to a wide range of customers, including content creators, game designers, gamers and early adopters. Apple’s next silicon upgrade is likely to include additional high-performance CPU cores to improve multitasking, more GPU cores to improve the performance of video editing and gaming, and AI training capability. 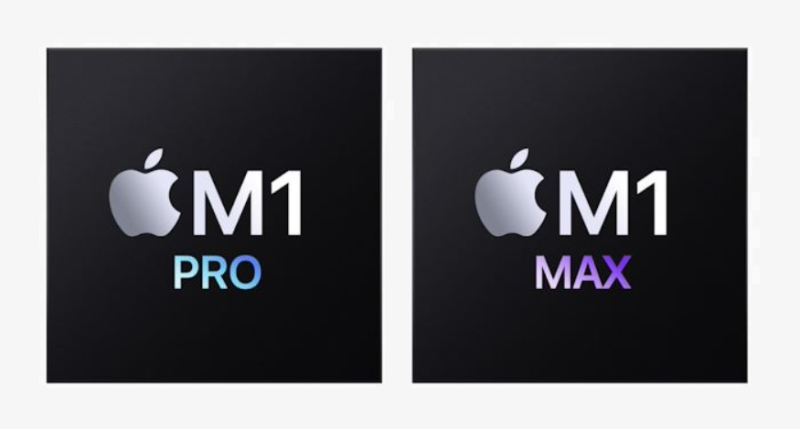 02: CPU ST Performance: Not Much Change from M1

In-part, AnandTech concludes: "The M1 Pro and M1 Max change the narrative completely – these designs feel like truly SoCs that have been made with power users in mind, with Apple increasing the performance metrics in all vectors. We expected large performance jumps, but we didn’t expect the some of the monstrous increases that the new chips are able to achieve.

AnandTech added: "The chips here aren’t only able to outclass any competitor laptop design, but also competes against the best desktop systems out there, you’d have to bring out server-class hardware to get ahead of the M1 Max – it’s just generally absurd.