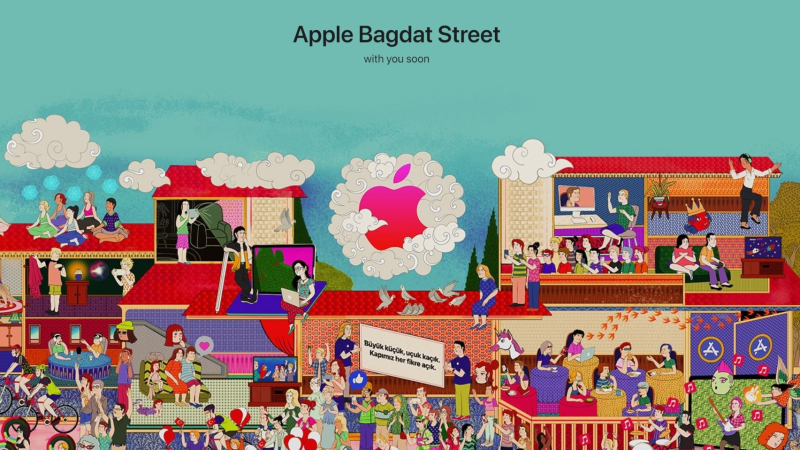 Apple is promoting their third store coming to Istanbul, Turkey soon. Apple's website in Turkey states: "We are opening a new store very soon on Bağdat Street, the heart of Istanbul. We look forward to meeting you and all your crazy ideas , big and small, in this third store where you will meet with experts who will help you in every way, improve your skills with new information, be inspired while spending time in the garden and reveal your creativity."

Apple has a new wallpaper of the full art available on their Turkish website here.

The new Apple store will be the first standalone street front store in Istanbul with the other two stores being found in large malls. The roof appears to be like the Apple Store in Chicago.

The Turkish Apple site Bigumigu reports that while announcing that its store on Bağdat Street will open soon, Apple announced that the colorful work specially prepared by Murat Palta will decorate the outside of the store until the opening.

Drawing attention with the miniatures of cult films, Murat Palta is appreciated for his experimental designs combining traditional Ottoman motifs and contemporary Western cinema. The artist had previously also designed the album cover of Apple Music's “Top of the Line: Turkey” list.

Located at the intersection of two streets in a central location, the store is expected to be lively and lively both inside and out. Apple said in a statement that they will create an area where you can spend time in the garden, apart from the service in the store. For more on this including a series of additional photos of the store's location, check out the full Bigumigu report here.

Tripadvisor states that Bagdat Street is in one of the major shopping districts in the city. The street is lined with several exclusive designer stores including Louis Vuitton and Escada. A better overview of Bagdat Street could be found here. The video below provides you with a general view of the street that the store will be opening on.