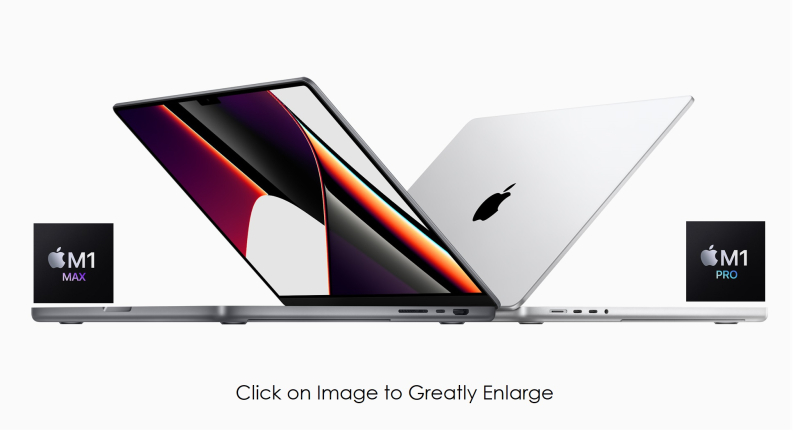 Today Apple unleashed the completely reimagined MacBook Pro powered by the all-new M1 Pro and M1 Max — the first pro chips designed for the Mac. Available in 14- and 16-inch models, MacBook Pro delivers groundbreaking processing, graphics, and machine learning (ML) performance whether running on battery or plugged in, as well as amazing battery life — enabling workflows previously unimaginable on a notebook. While Microsoft's new Surface Laptop Studio that was delivered last month could be considered by many of binging a nice general laptop, Apple's new MacBook Pro models blow the competiton away.

Presented below is Apple's new marketing video that takes a whole-new direction from marketing of the past to match the insanity of the new MacBook Pros.

Combined with macOS Monterey, which is engineered down to its core to take full advantage of M1 Pro and M1 Max, the user experience is simply unrivaled. Shattering the limits of what a notebook can do, MacBook Pro is designed for developers, photographers, filmmakers, 3D artists, scientists, music producers, and anyone who wants the world’s best notebook.

The new MacBook Pro joins the 13-inch MacBook Pro with M1 to form the strongest lineup of pro notebooks ever. Customers can order the new 14- and 16-inch MacBook Pro models today, and they will be available beginning Tuesday, October 26.

Joswiak added that "The all-new MacBook Pro adds a breathtaking XDR display, more ports like MagSafe 3, an advanced 1080p camera, and a sensational six-speaker sound system, all in a stunning new design. The new MacBook Pro simply has no equal and is by far the best pro notebook we’ve ever built." 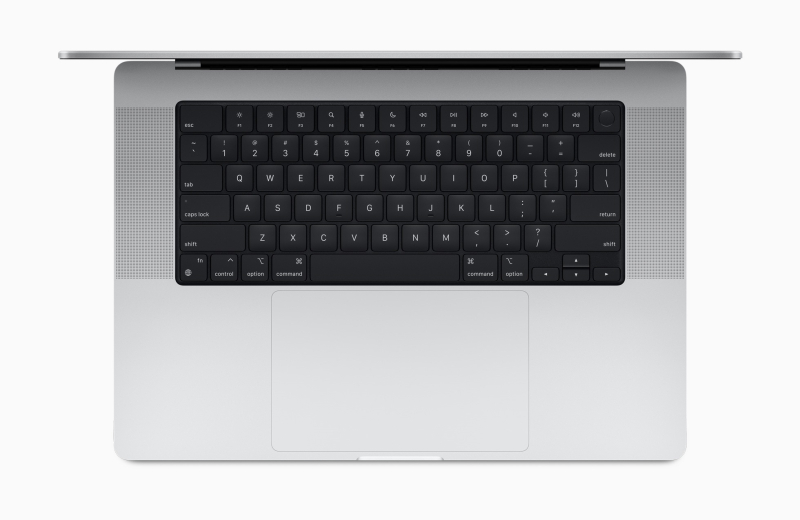 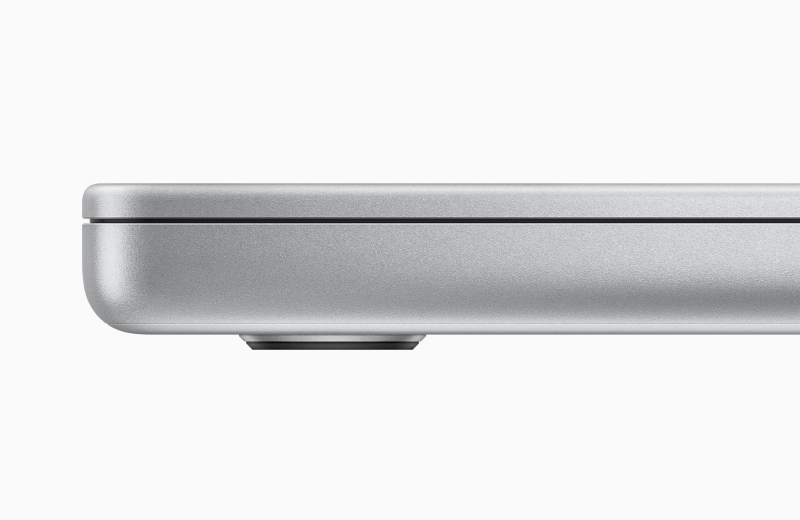 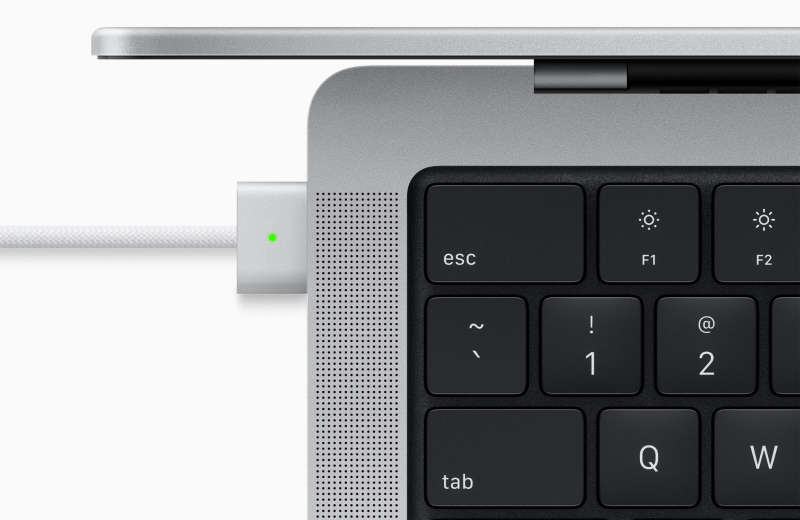 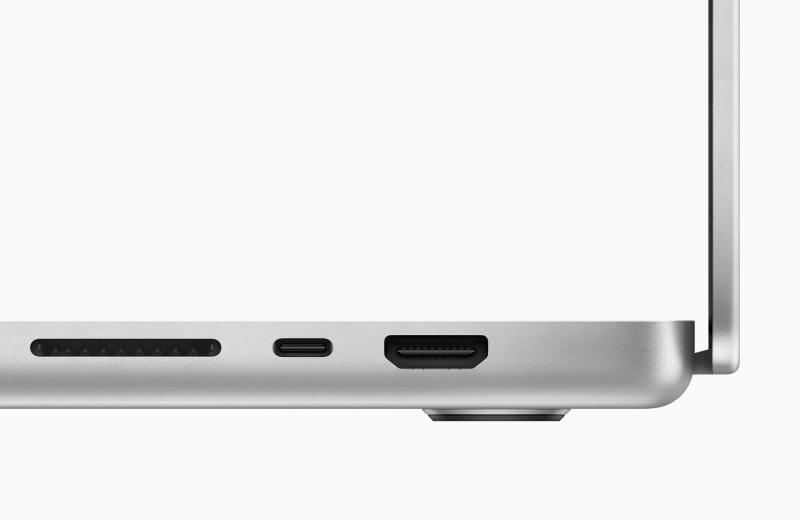 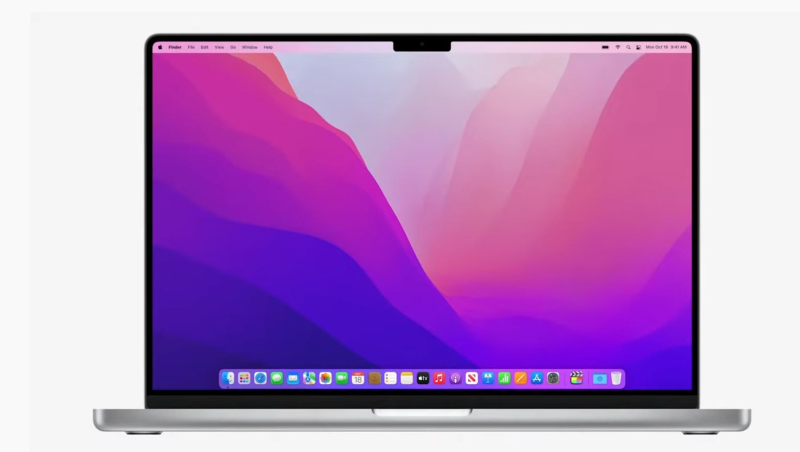 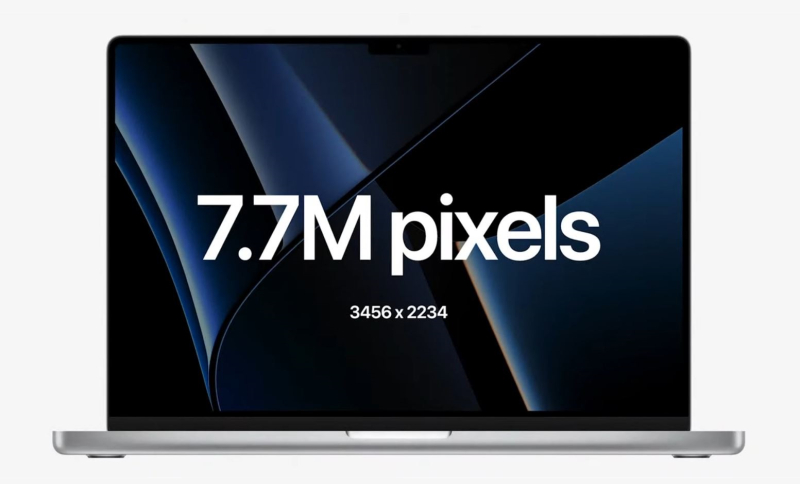 M1 Pro: A Whole New Level of Performance and Capability

Utilizing the industry-leading 5-nanometer process technology, M1 Pro packs in 33.7 billion transistors, more than 2x the amount in M1. A new 10-core CPU, including eight high-performance cores and two high-efficiency cores, is up to 70 percent faster than M1, resulting in unbelievable pro CPU performance. Compared with the latest 8-core PC laptop chip, M1 Pro delivers up to 1.7x more CPU performance at the same power level and achieves the PC chip’s peak performance using up to 70 percent less power.1 Even the most demanding tasks, like high-resolution photo editing, are handled with ease by M1 Pro. 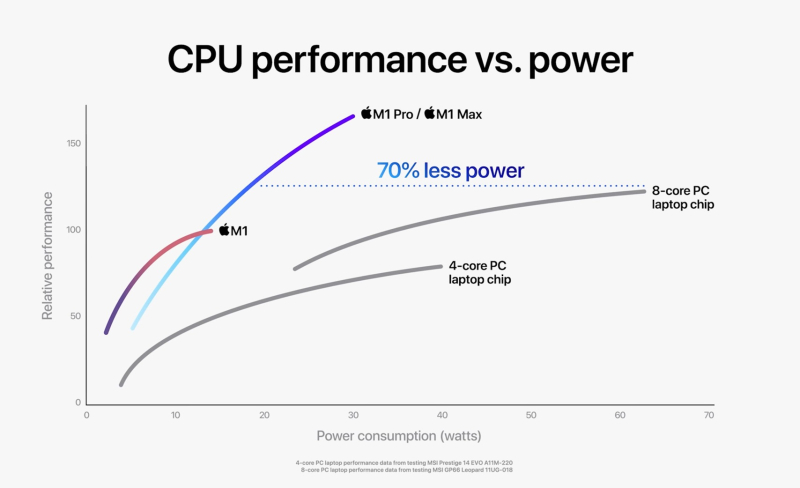 M1 Pro has an up-to-16-core GPU that is up to 2x faster than M1 and up to 7x faster than the integrated graphics on the latest 8-core PC laptop chip.1 Compared to a powerful discrete GPU for PC notebooks, M1 Pro delivers more performance while using up to 70 percent less power.2 And M1 Pro can be configured with up to 32GB of fast unified memory, with up to 200GB/s of memory bandwidth, enabling creatives like 3D artists and game developers to do more on the go than ever before.

M1 Max: The World’s Most Powerful Chip for a Pro Notebook

M1 Max features the same powerful 10-core CPU as M1 Pro and adds a massive 32-core GPU for up to 4x faster graphics performance than M1. With 57 billion transistors — 70 percent more than M1 Pro and 3.5x more than M1 — M1 Max is the largest chip Apple has ever built. In addition, the GPU delivers performance comparable to a high-end GPU in a compact pro PC laptop while consuming up to 40 percent less power, and performance similar to that of the highest-end GPU in the largest PC laptops while using up to 100 watts less power.2 This means less heat is generated, fans run quietly and less often, and battery life is amazing in the new MacBook Pro. M1 Max transforms graphics-intensive workflows, including up to 13x faster complex timeline rendering in Final Cut Pro compared to the previous-generation 13-inch MacBook Pro. 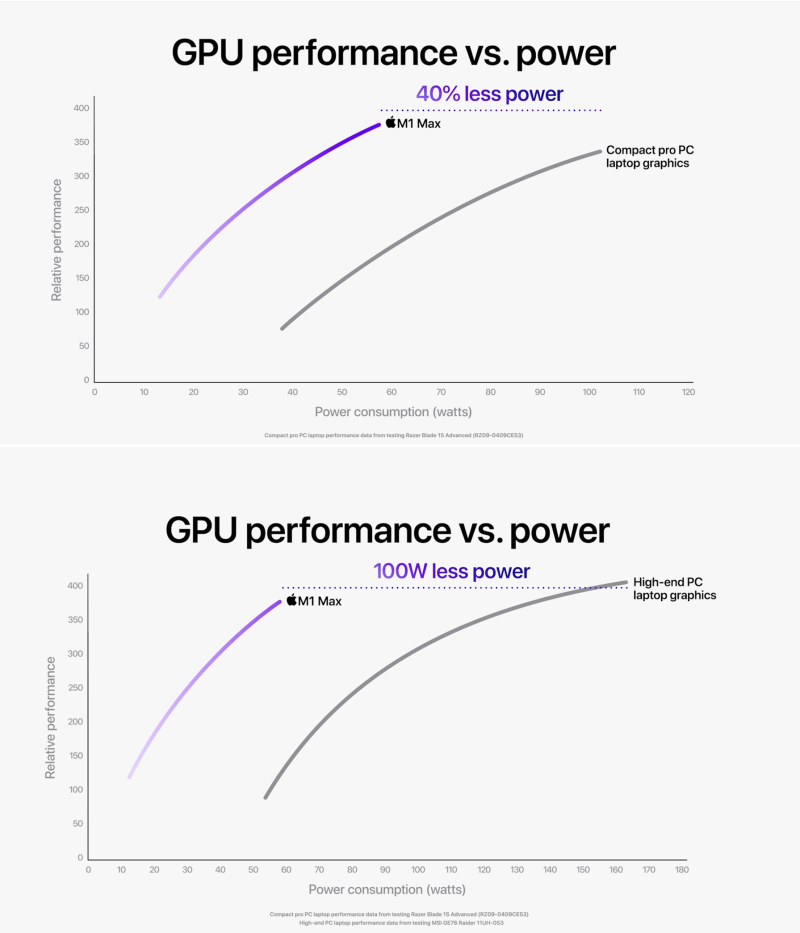 M1 Max also offers a higher-bandwidth on-chip fabric, and doubles the memory interface compared with M1 Pro for up to 400GB/s, or nearly 6x the memory bandwidth of M1. This allows M1 Max to be configured with up to 64GB of fast unified memory. With its unparalleled performance, M1 Max is the most powerful chip ever built for a pro notebook.

Feast your eyes on XDR

Liquid Retina XDR. The best display ever in a notebook features Extreme Dynamic Range and a million to one contrast ratio. HDR content comes to life in photos, video, and games — with refined specular highlights, incredible detail in shadows, and vibrant, true-to-life colors. Each display is factory calibrated and features pro reference modes for HDR color grading, photography, design, and print production.

ProMotion. ProMotion comes to Mac for the first time, making everything from scrolling through a web page to gaming super fluid and responsive — while also reducing power consumption. With refresh rates of up to 120Hz, the adaptive technology automatically adjusts to match the movement of the content. ProMotion video editors can also choose a fixed refresh rate that precisely aligns with their footage. 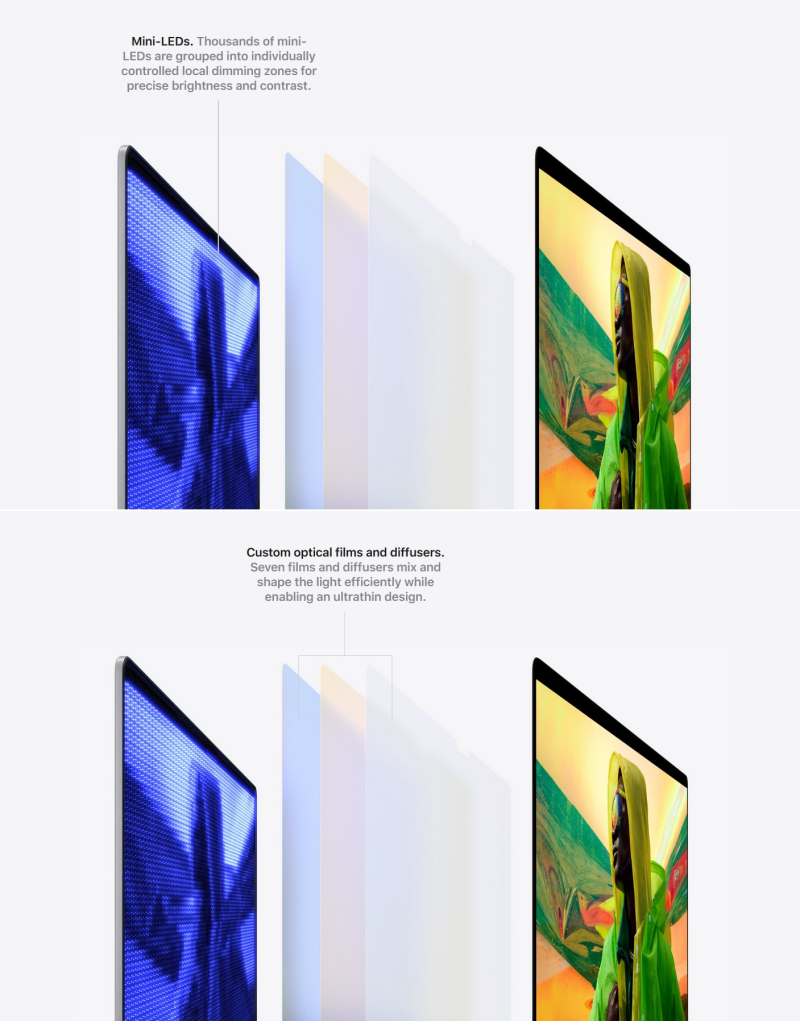 There's so much more about the MacBook Pros to explore here and the new mind boggling M1 Pro and M1 Max processors here.

You could also watch and listen to Apple's SVP, Hardware Technologies, Johny Srouji describe the new processors in detail between the 18:40 and 26:00 minute marks on the event video below. You could then advance the video to the 33:40 minute mark to begin listening to John Ternus, Apple's Senior Vice President of Hardware Engineering, describe the new MacBook Pros along with yet another cool video to watch. The video continues through to other Apple managers going through various aspects fo the new MacBook Pros from the new keyboard to the new larger mini-LED backlit displays with it's TrueDepth notch and new FaceTime camera system. 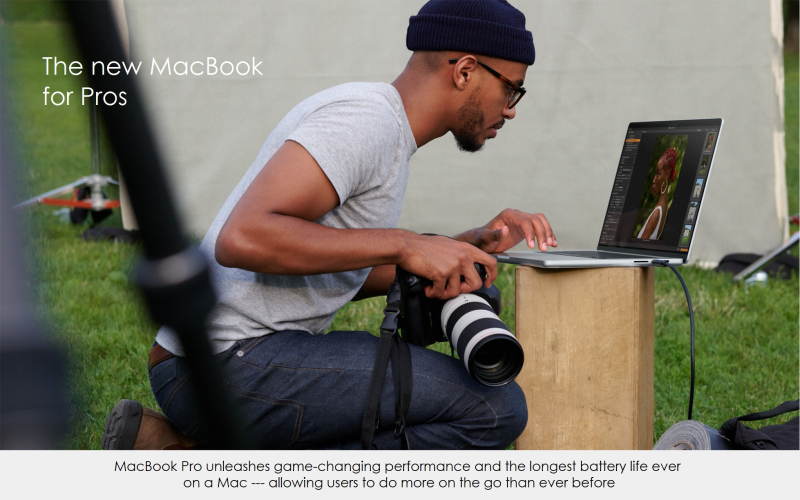 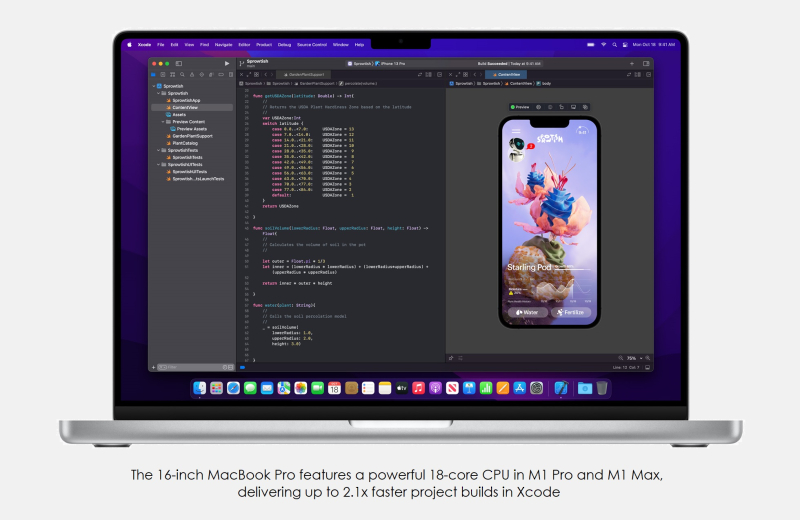 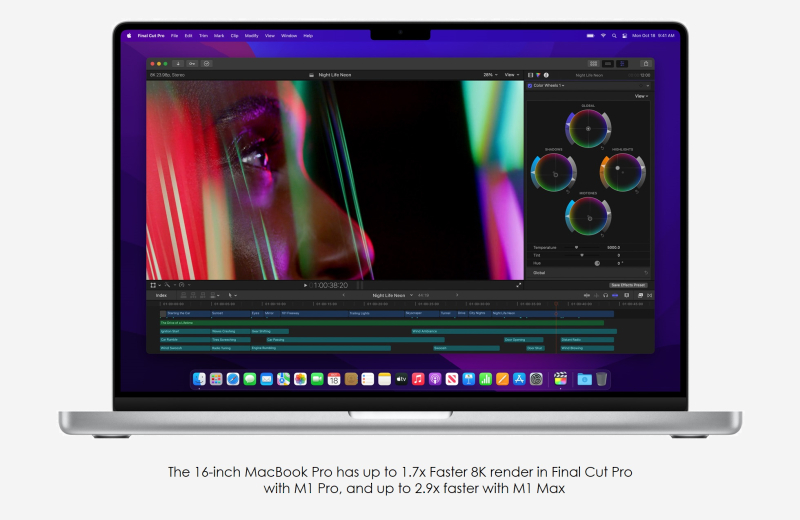