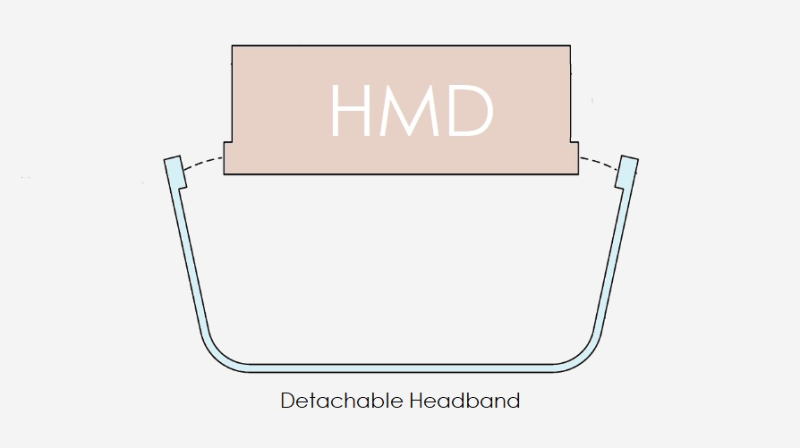 Apple's Head-Mounted Devices (HMDs) will reportedly start to surface sometime in 2022 if rumors from Ming-Chi Kuo and others actually pan out. To date, Patently Apple has posted over 300 patent reports on this future product category or three times the patents that we've covered for Apple's electric vehicle under "Project Titan." The volume of patents filed for this single category goes to illustrate Apple's commitment to this future product line and how hard Apple's many teams have researched and developed all facets of Mixed Reality headsets and future glasses.

One recent theme has been finding ways to fit a Head-Mounted Mixed Reality Headset comfortably on a user's head. One patent covered a motorized adjustable mechanism while another covered how a headset could add magnetic detachable speakers to a headset headband system.

On Thursday, the US Patent & Trademark Office published another patent application on this subject matter titled "Headband for Head-Mounted Device." The patent covers both a new headband adjustment system and ways for a detachable magnetic speaker accessory could be adjusted for the listener's enjoyment.

Getting down to the specifics, Apple's patent application/invention covers a head-mounted device that includes a headband connector that is movable between a connected and disconnected position to detach either one end of the headband or both ends of the headband from a device housing of the HMD. This particular arrangement makes it easier and more convenient for the user to put the device on their head and remove it.

Apple's patent FIG. 1 below is a block diagram that shows an example of a hardware configuration for a head-mounted device; FIG. 2 is a top view illustration that shows the head-mounted device with a headband in a disconnected position with respect to a device housing; and FIG. 3 the headband is in a connected position with respect to the device housing. 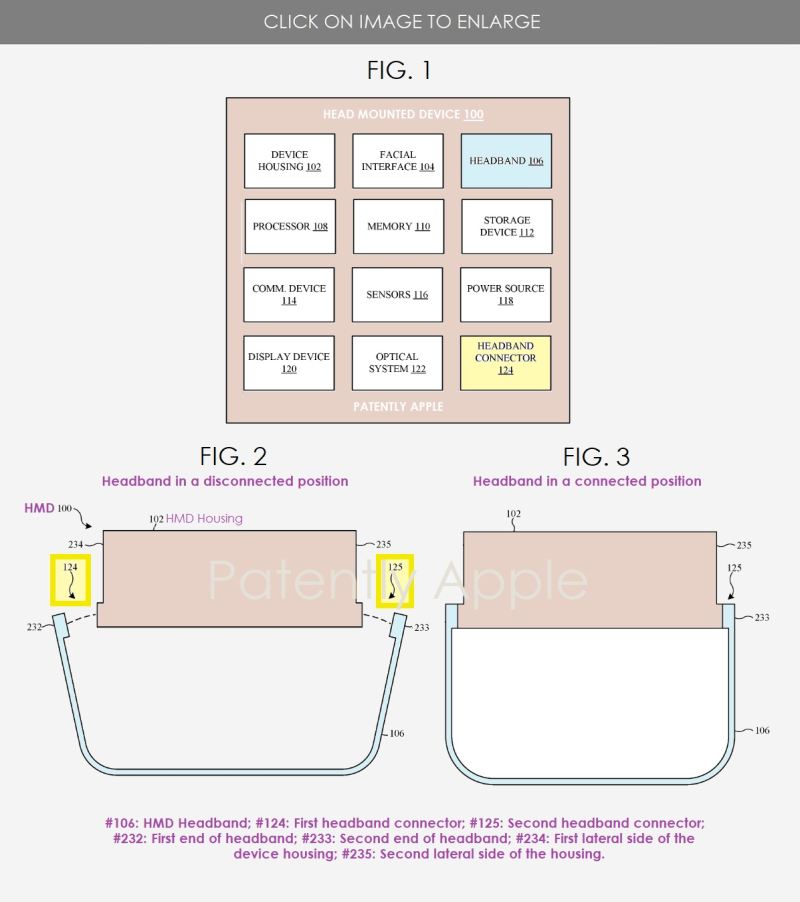 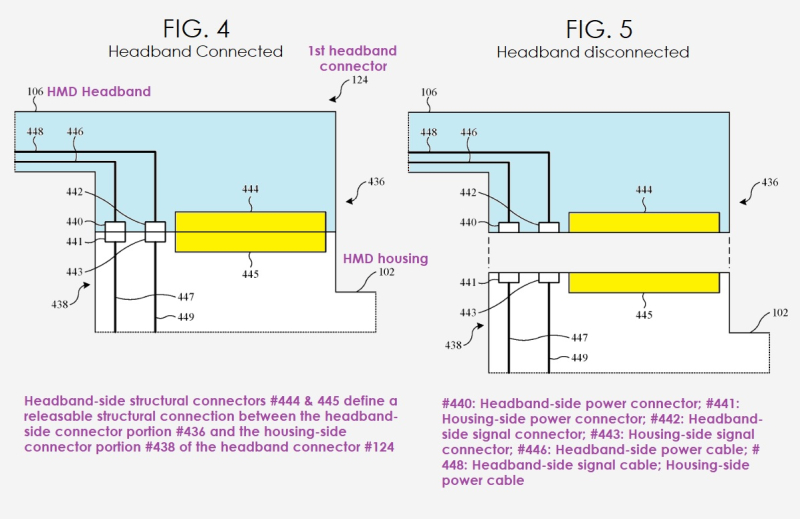 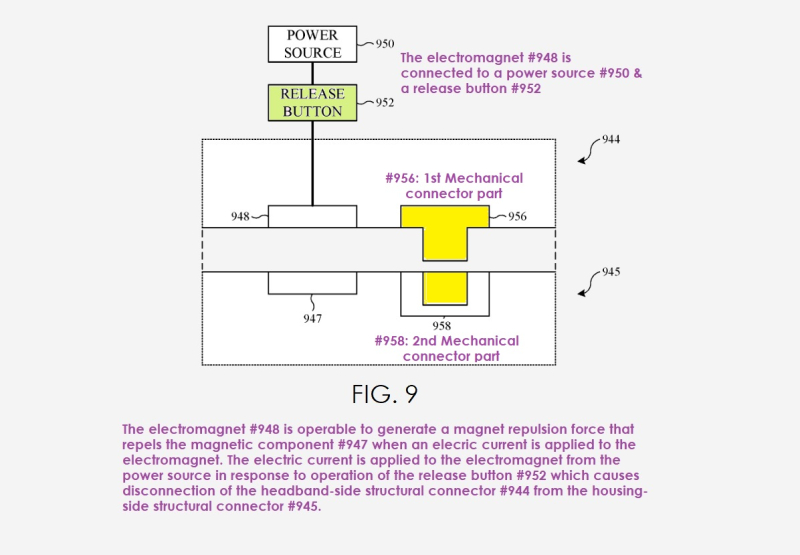 Apple later notes that components that are included in the head-mounted device may be configured to track motion of parts of the user's body, such as the user's head and hands. Motion tracking information that is obtained by components of the head-mounted device can be utilized as inputs that control aspects of the generation and display of the content to the user, so that the content displayed to the user can be part of a CGR experience (VR, AR experiences) in which the user is able to view and interact with virtual environments and virtual objects.

Apple's patent FIG. 11 below is a top view illustration that shows the head-mounted device with a headband adjustment device in an expanded position while FIG. 12 is in a contracted position. 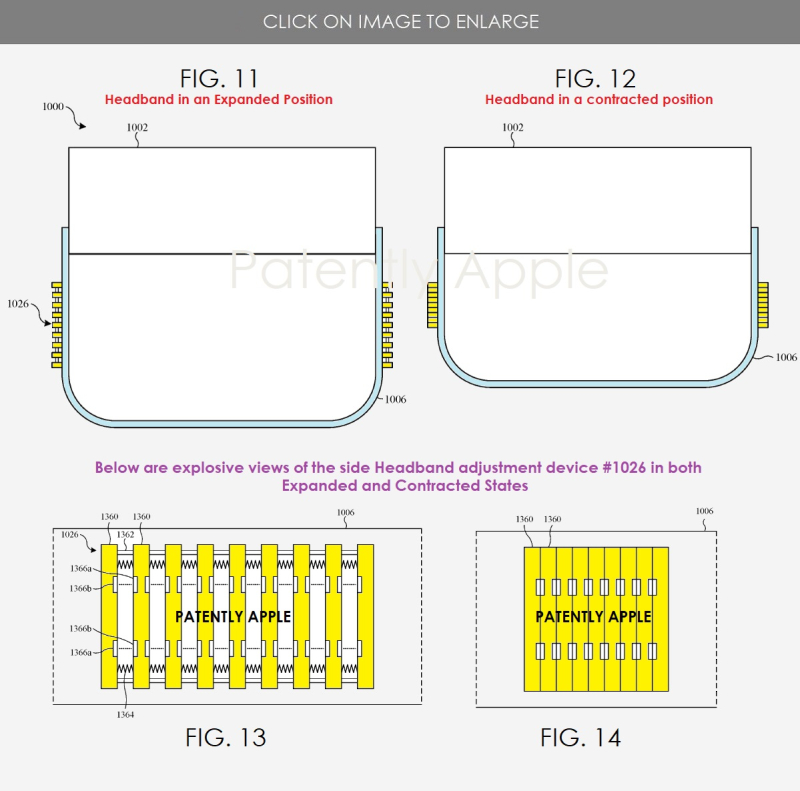 Apple's patent FIGS. 13 and 14 above are exploded side views of the headband adjustment devices in their expanded and contracted states.

Apple's patent FIG. 16 is a top view illustration that shows the head-mounted device and the accessory adjustment device and FIG. 17 and 18 illustrate a magnet-based attachable speaker/headphone having a means of adjusting its positioning that's best for the user's listening enjoyment. 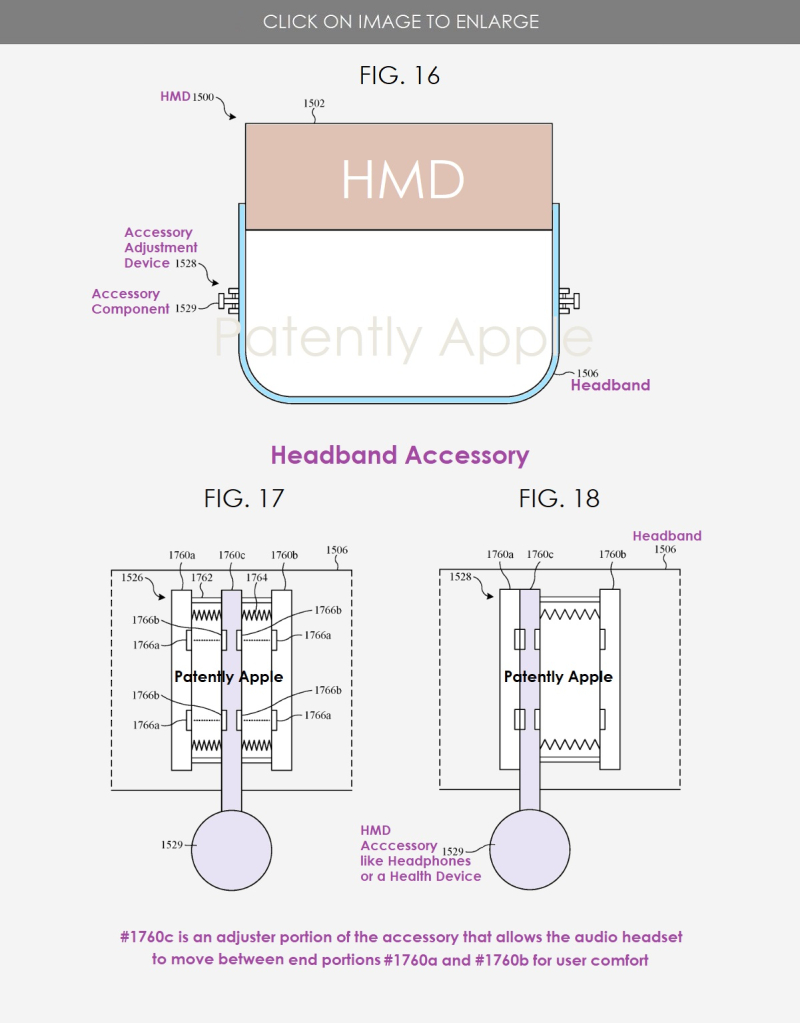 Beyond the adjustable headset focus, the patent filing throws a bunch of goodies into your Halloween bag about the headset's sensors noted in patent figure 1 under "sensors 116" which includes:

"components that facilitate motion tracking (e.g., head tracking and optionally handheld controller tracking in six degrees of freedom); include conventional components such as cameras, infrared cameras, infrared emitters, depth cameras, structured-light sensing devices, accelerometers, gyroscopes, and magnetometers; The sensors may also include biometric sensors that are operable to physical or physiological features of a person, for example, for use in user identification and authorization with fingerprint scanners, retinal scanners, and face scanners (e.g., two-dimensional and three-dimensional scanning components operable to obtain image and/or three-dimensional surface representations).

The Three inventors listed on this invention include: