Home Archives Contact Us Subscribe Twitter MeWe Facebook Patently Mobile
Apple Slates the Film 'Swan Song' for December in Theaters & Apple TV+ while releasing their second Featurette for 'The Morning Show'
On the Eve of the iPhone 13 Event, a new Analytical Report claims that almost one-third of iPhones are traded-in for a new iPhone 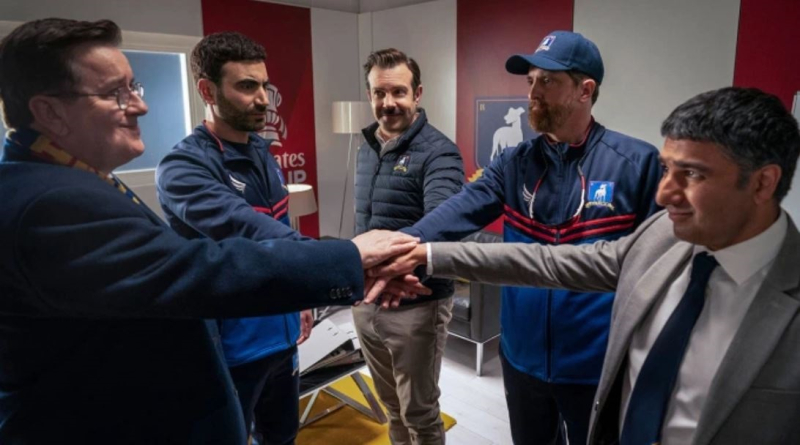 While AFC Richmond may have been relegated at the end of season one, the cast, producers and writers of Ted Lasso have scored their own big promotions.

Multiple sources tell The Hollywood Reporter that the stars — from Ted Lasso himself, Jason Sudeikis, down to the last player on Richmond’s roster — of Apple TV+’s Emmy-nominated comedy recently engaged in a round of contract renegotiations with Ted Lasso producers Warner Bros. Television that gave them all sizable pay increases.

Showrunner Bill Lawrence is also seeking an increase from the five-year, eight-figure overall deal he signed with Warner Bros. in late 2018, before Ted Lasso became a Peabody-winning cultural sensation for the studio where his Doozer banner has been based since 2011.

Writers on Ted Lasso, which garnered 20 Emmy nominations including outstanding comedy series and a pair of writing mentions en route to tying Glee as the most-nominated freshman show, also scored significant salary bumps. Included in the writer negotiations are separate deals for Brendan Hunt (Coach Beard) and Brett Goldstein (Roy Kent), each of whom have penned multiple episodes of the show and also exec produce.

Ted Lasso is the latest breakout show to renegotiate deals after season two (other recent examples include Stranger Things and This Is Us). While Apple handed out an early third season renewal last October — and ahead of the show’s return to production for its sophomore season — the renegotiations with writers briefly delayed the opening of the season three room. Sources say rich new deals with the all the writers — who were poised to start work in August — were hammered out over the weekend ahead of the new Sept. 13 start date.

Sudeikis, sources say, has already closed a deal for season three that will pay him in the vicinity of $1 million an episode. The sum also includes creator fees and compensation for his role as the show’s head writer and exec producer.

For more details on the negotiations with Warner Bros., check out the full report from The Hollywood Reporter.

Hmm, perhaps Apple should splurge and send all Apple TV+ subscribers a Lasso cap for making the show a hit.