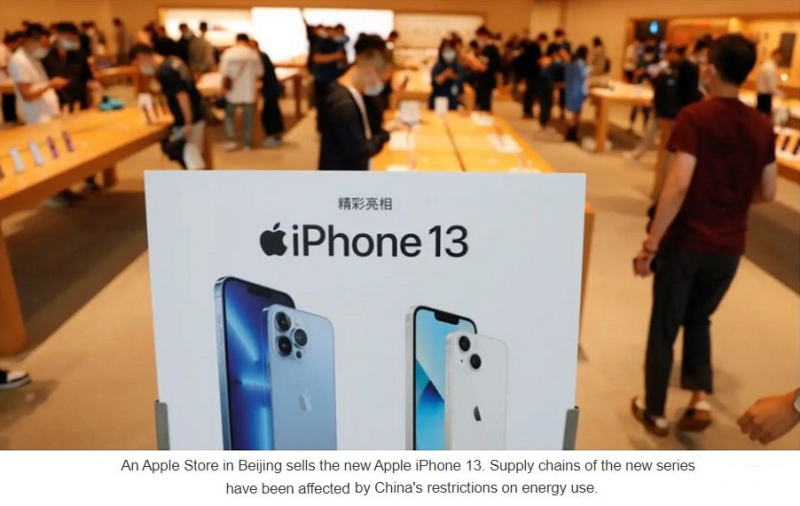 Several key Apple suppliers have halted production at some of their Chinese facilities to comply with Beijing's tighter energy consumption policy, putting supply-chain continuity at risk during a peak season for electronics goods including the latest iPhones.

Eson Precision Engineering, an affiliate of Foxconn -- the world's biggest iPhone assembler -- and a key mechanical parts supplier for Apple, on Sunday said it suspended its production from Sunday until Friday at its facilities in the Chinese city of Kunshan in direct response to the city's policy of stopping electricity supply for industrial use.

"The company will leverage its inventory to maintain the operation while production is halted," Eson said in a filing with the Taiwan stock exchange. "We expect to arrange production on the weekends or in the upcoming holidays [next month] to meet customers' needs."

China's crackdown on energy consumption comes from a combination of reasons -- surging coal and natural gas prices, as well as Beijing's effort to cut emissions and an increase in energy demand -- and is impacting a wide range of industries.

Unimicron Technology, a major print circuit-board maker and key Apple supplier, said its subsidiaries in the Chinese cities of Suzhou and Kunshan in Jiangsu Province also needed to stop production from Sunday noon till the end of the month. The Taiwanese company said it would mobilize production capacity in its other manufacturing sites to mitigate the impact, according to its stock-exchange filing on Sunday.

IPhone speaker component supplier Concraft Holding, which owns manufacturing facilities in the Chinese city of Suzhou, said in a stock- exchange filing that it would suspend production for five days until noon Thursday and utilize its inventory to support the demand.

Key iPhone assembler Pegatron, which operates massive production sites in both Kunshan and Suzhou, on Sunday night told Nikkei Asia its facilities were running as usual at the moment, but had already prepared power generators should the company receive further notice from the city governments. For more, read the full Nikkei Asia report.