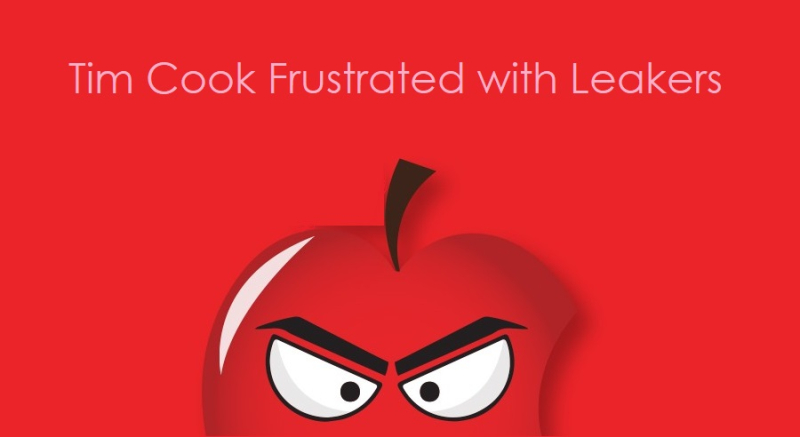 This morning Patently Apple posted a report titled "TSMC Fires Seven Employees for Leaking Customer Secrets & more." The report touched on leaks occurring at TSMC which could affect their top customers and on Apple product leaks in general, including Apple legal clamping down on leakers overseas. Now a new report reveals that Apple CEO Tim Cook sent out a stern memo to employees about confidential company information being leaked.

Cook stated in a recent memo that employees "who leak confidential information do not belong" at Apple. The Verge got a hold of Tim Cook's memo and below is part of it's core message:

"I’m writing today because I’ve heard from so many of you were were incredibly frustrated to see the contents of the [Friday] meeting leak to reporters. This comes after a product launch in which most of the details of our announcements were also leaked to the press.

I want you to know that I share your frustration. These opportunities to connect as a team are really important. But they only work if we can trust that the content will stay within Apple. I want to reassure you that we are doing everything in our power to identify those who leaked. As you know, we do not tolerate disclosures of confidential information, whether it’s product IP or the details of a confidential meeting. We know that the leakers constitute a small number of people. We also know that people who leak confidential information do not belong here."

It's no secret that Apple has had a new campaign in play to track down leakers overseas since the new year and perhaps its next phase is to out internal leakers that feed product features and time frames to those at Bloomberg and other publications, including The Verge.

If Tim Cook wants those at their Cupertino headquarters and the public in general to take his warnings seriously, then the serial leakers at Apple have to be found and fired in order to send a shock wave through the company that leakers won't be tolerated.

In 2020, Apple was the second largest smartphone maker in the MEA Market (Middle East an Africa) and in just a few short months, two new players surged onto the market and took Apple out of the top five list in Q2-21. All of these competitors look to meet and beat Apple's iPhone features and Apple knows that ongoing leaks, that are getting more sophisticated every year, are beginning to take their toll.