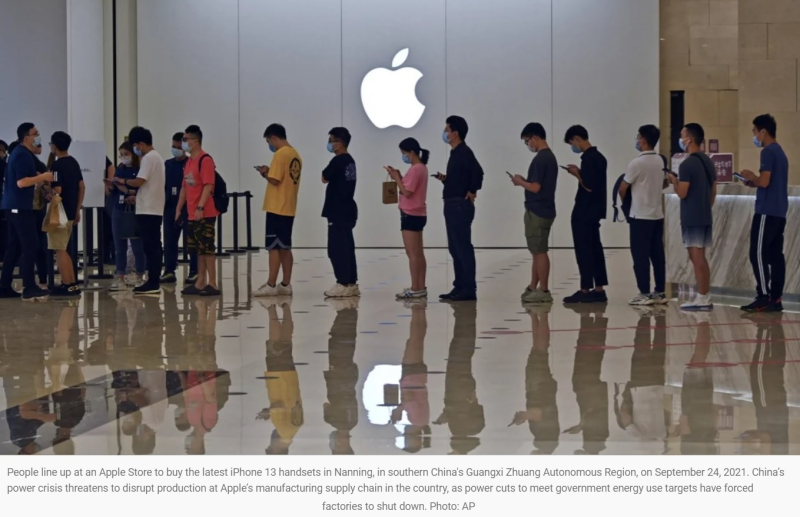 Earlier today we learned about a new wave of COVID-19 has disrupted Apple's supply chain in Vietnam. On another front, we're learning that China's power crisis is putting a squeeze on Apple's supply chain as well. Power blackouts in more than 10 provinces across the mainland have forced several major Apple suppliers to suspend operations at some of their factories. The damage caused by China’s power-rationing measures could negatively impact electronics manufacturers during their peak season, though Taiwan component makers are giving priority to iPhone 13 components. The video below from South China Morning Post report is an eye opener of the extent of the crisis .

China’s power restrictions threaten to disrupt production at Apple’s supply chain in the country and the broader domestic electronics manufacturing industry, including semiconductors, ahead of the busy Christmas shopping season.

On Sunday, semiconductor assembly and test firm ASE Technology Holding said its plant in Kunshan, a city in southeastern Jiangsu province, will halt production from Monday to Wednesday to comply with the local government’s power restrictions. ASE gets about 29 per cent of its revenue from Apple.

Eson Precision Engineering, an affiliate of main Apple supplier Foxconn Technology Group, said on Sunday that production at its facilities in Kunshan will not resume until Friday at the earliest.

In a separate announcement, chip packaging material manufacturer Chang Wah Technology, which is a supplier to ASE, said it has suspended production from Sunday through to the end of this month.

The power shortage, which has turned critical in recent days, has come at the most inopportune time, as manufacturers scramble to meet orders across the globe, according to Gu Wenjun, chief analyst at Chinese semiconductor and electronics market research firm ICwise, in a report published on Tuesday. For more, read the full report by the South China Morning Post.