Home Archives Contact Us Subscribe Twitter MeWe Facebook Patently Mobile
On Tuesday, Apple was Granted a Project Titan Patent covering a Multi-Stage Active Suspension Actuator
Samsung to supply Apple with OLED Displays for the 2022 iPad Pro that will use a new manufacturing process 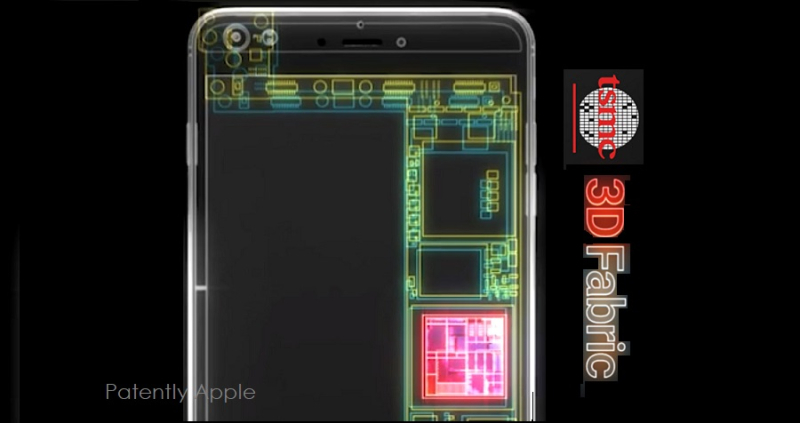 In early June, Patently Apple posted a report titled "TSMC's 3DFabric Technology is the next big wave in Chip Design that Apple will take advantage of in the not-too-distant Future." At the time, TSMC's CEO CC Wei stated: "We are working with several customers on 3DFabric to enable chiplet architecture." Interesting enough, Apple's work on developing a chiplet design started back in 2017. Apple was granted their first patent for their chiplet design in March 2021 while filing an update in May.

Flash forwarding to today, and we're learning that TSMC is claiming that Apple, AMD, MediaTek, Xilinx, NXP, Qualcomm and others will be early adopters of their 3D Fabric platform inline with the launch of 3nm processors in 2022.

Apple's next-gen iPhones in 2022 are likely to use TSMC's 3D Fabric platform that will be able to combine many AI functions, new types of memory and related embedded chips. Testing will be done at both TSMC's Zhunan and Nanke plants this year and ready for mass production in H2 2022.

Dedui added that with the advancement of advanced process technology to 3nm or below, the concept of small chips with advanced packaging has become a necessary solution.

To learn more about TSMC's 3D Fabric, check out their dedicated webpage here.