Home Archives Contact Us Subscribe Twitter MeWe Facebook Patently Mobile
An Apple Patent Reveals the Mind-Boggling array of Facial Sensors that could end up in Apple's future mixed reality headset over time
Apple Invents what could be a Revolutionary next-gen Lenticular Display for Macs, HMDs & iDevices 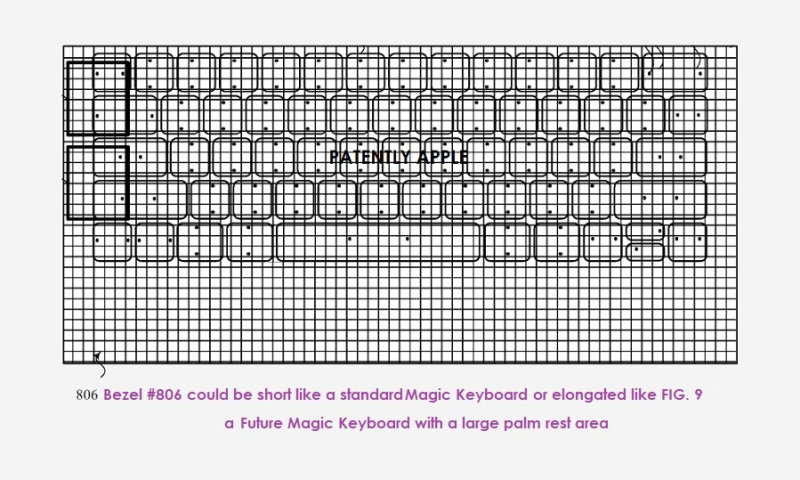 Today the US Patent & Trademark Office published a patent application from Apple that relates to a possible redesign of the keyboard for MacBook and/or Magic Keyboard for desktops that could detect key positions, key movement, and/or gesture input provided on or over a set of keys (or on or over a bezel adjacent the set of keys). Better yet, the palm rest area could provide a virtual component like an optional display that could accommodate Apple Pencil input and more.

More particularly, the described embodiments relate to a keyboard or other input device having capacitive key position, key movement, and/or gesture input sensors. The capacitive sensors may be used to detect a key "make" (e.g., a key press or actuation), a key "break" (e.g., a key release), or other parameters related to key position or key movement. In some cases, the capacitive sensors may also or alternatively be used to detect motion (e.g., gesture input) provided on or over the keys, or on or over a bezel that is adjacent to the set of keys. A gesture input may be limited to motion that does not trigger a key make event, or in some cases may include motion that does trigger a key make event.

Apple's patent FIGS. 1A and 1B simply communicate that the invention relates to keyboards on a MacBook or the Magic Keyboard for the iMac and/or Mac Pro; FIG. 9 illustrates a modified Magic Keyboard with MacBook-Like palm rest. 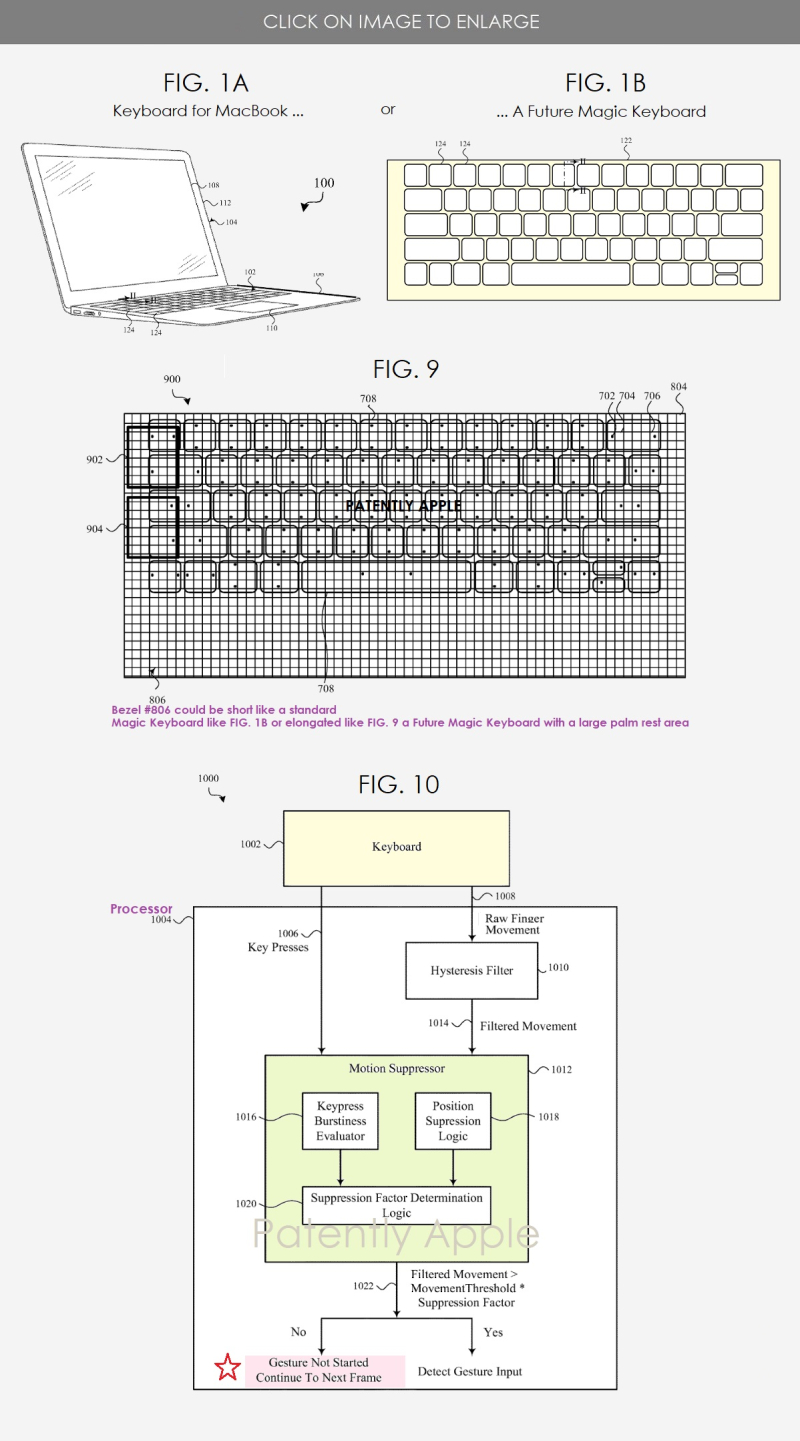 Additionally, or alternatively, the keyboard may be switched between the key input mode and the gesture input mode by virtue of the type of object that is touching or hovering above the keyboard.

For example, a user may make a gesture on or over the keyboard with their fingernail, a stylus, or while wearing a glove. Doing so may change the range of capacitances that are obtained from the keyboard's electrodes, and may signify that the user wants to operate the keyboard in the gesture input mode.

Apple notes that the following is a non-limiting list of example gesture input that can be used to select text on a screen:

(1) Touching and holding two fingers on a keyboard for a predetermined amount of time (e.g., two seconds). The fingers may be positioned together or apart, depending on how a system is configured.

(2) Placing two or more fingers on or over a keyboard and then spreading the fingers apart.

(3) Double-tapping a keycap or bezel of a keyboard without depressing the keycap.

(4) Moving one or more fingers in a cyclic hovering motion, on or over a keyboard, to move a cursor or marker on a computer screen, and tapping a keycap or other surface of the keyboard when the cursor or marker is proximate to a text selection icon.

(5) Horizontally sliding two fingers across a portion of a keyboard (e.g., across the keyboard's keycaps or bezel).

(6) Entering a text selection mode by providing a first gesture input to enable a text marker insertion mode, and then performing a further gesture.

(7) Entering a text selection mode by waving a hand proximate to a keyboard (e.g., in a bottom-to-top or top-to-bottom motion, or other motion, starting over a bezel of the keyboard), and then performing a further gesture. And…

(8) Sliding a finger along a bezel of a keyboard, from side-to-side or top-to-bottom, or bottom-to-top.

Apple has been working a number of alternative MacBook input in the form of a second display replacing the physical keyboard that could take on many shapes and user interfaces as presented in previous patent reports here: 01, 02 and 03 as just a few examples.