Home Archives Contact Us Subscribe Twitter MeWe Facebook Patently Mobile
In Q2-21 Apple Remained the Clear Leader in Smartwatches and likely to Spike higher with the release of Apple Watch 7
Apple TV+ Releases the Documentary 9/11: Inside the President's War Room along with a Trailer and more 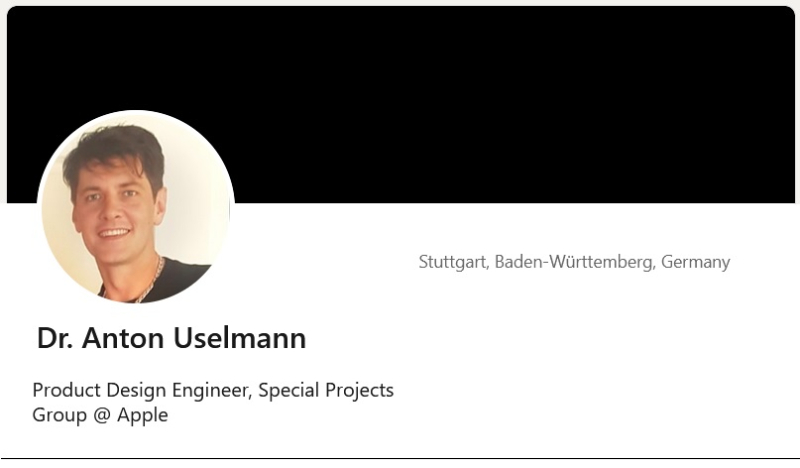 Dr. Anton Uselmann has just joined Apple Inc. as a Product Design Engineer – Special Projects, which in this case is likely referring to Project Titan. Uselmann came to Apple from Mercedes where he spent close to four years as a "Development Engineer, Steering System." Previous to that, Uselmann worked at Porsche for close to 6 years as a "Function Developer, Steering Systems." His background adds more intrigue to Apple's secretive project.

This has been a huge year in new major hires for Project Titan. In February, Apple hired Dr. Manfred Harrer. His LinkedIn page finally revealed, that officially, he joined Apple in April 2021, well after the news had broken in February. Then in June, we reported that Apple had hired Ulrich Kranz, a former senior executive at BMW AG’s electric car division, to help lead its own vehicle efforts. Apple's latest hire was first reported on by MacRumors today.

In addition to Patently Apple reporting on 109 Project Titan patents to date, a stream of rumors continue to surface with most of them sounding more like wild guesses. There was the wild rumor about Kia was in talks with Apple, with others covering LG and Magna and one pointing to Toyota from Digitimes today.  Even Apple analyst Ming-Chi Kuo has taken a few stabs at predicting when the Apple Car would be coming to market.

Apple's patents and their major hires have been the best indicators about the depth this project really has. Apple has certainly created a great cover of rumors of them talking to everyone in the industry so as to confuse and lead journalists off course. We'll have to patiently await an official word from Apple, which is likely still years away. Until then, expect more rumors to feed the frenzy.