Home Archives Contact Us Subscribe Twitter MeWe Facebook Patently Mobile
Apple oddly forewarns child pornographers that their photos on iDevices will be scanned for illegal content starting this fall
As expected, Apple's first retail store that was to open in India this year is now officially delayed until 2022 due to COVID 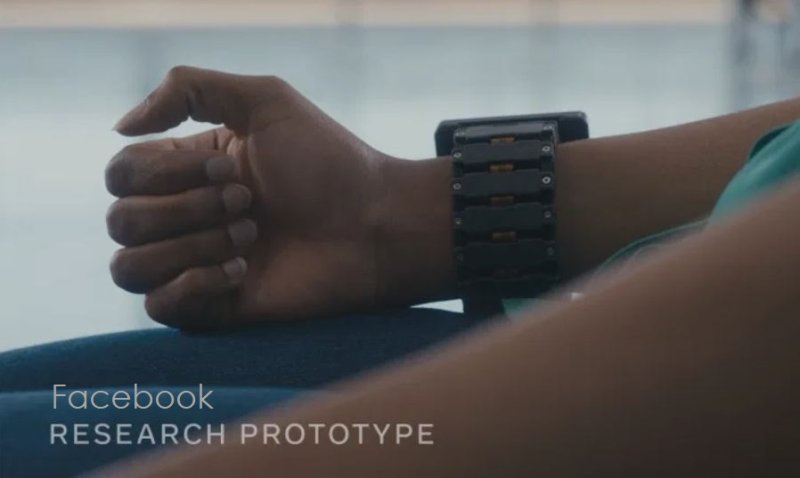 In March Patently Apple posted a report titled "Facebook reveals initial work on wrist-based input devices for future AR Glasses & plans to reveal their work on Haptic Gloves later this year. An image of the wrist device from their research department is presented above. You could some of the details behind this project from our March report here. One of Facebook's promotional videos on this future device is presented below.

Facebook's patent FIG. 8A below illustrates a wearable system with a plurality of sensors (#810) arranged circumferentially around an elastic band (#820) structured to be worn around a user's lower arm or wrist. The sensors may be neuromuscular sensors (e.g., EMG sensors). As shown, there may be sixteen sensors arranged circumferentially around the elastic band at a regular spacing.

Examples of auxiliary devices include, but are not limited to, IMUs, microphones, imaging devices (e.g., cameras), radiation-based sensors for use with a radiation-generation device (e.g., a laser-scanning device), heart-rate monitors, and other types of devices, which may capture a user's condition or other characteristics of the user. 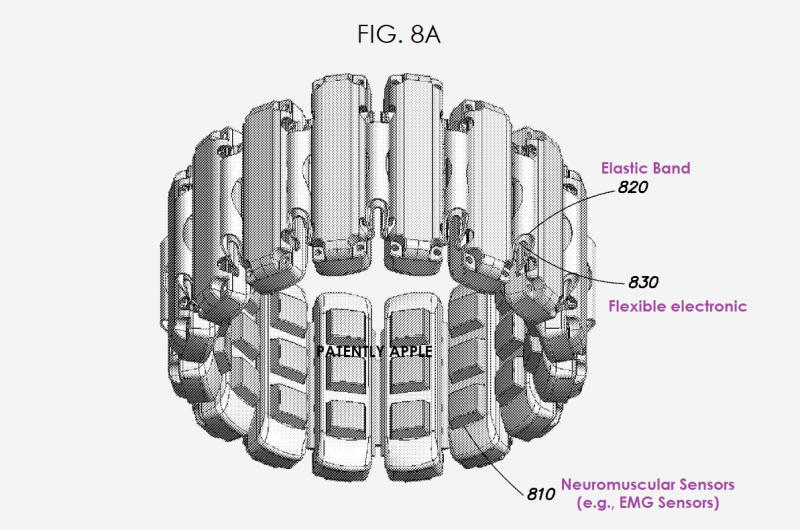 Facebook's patent FIG. 10 below illustrates a diagram schematically showing an example of an implementation using EMG sensors and a camera. For example, FIG. 10 shows a user's arm and an attached hand ("arm/hand" #1010), which is made up of one or more joints and segments, and which can be depicted as a musculoskeletal representation.

More particularly, the user's hand segments (#1020) are connected by joints. The arm and hand positions and segment lengths of the arm and the hand can be determined by the system 1000 and positioned within a three-dimensional space of a model musculoskeletal representation. Further, the user's hand may also include an interpolated forearm segment (#1030). 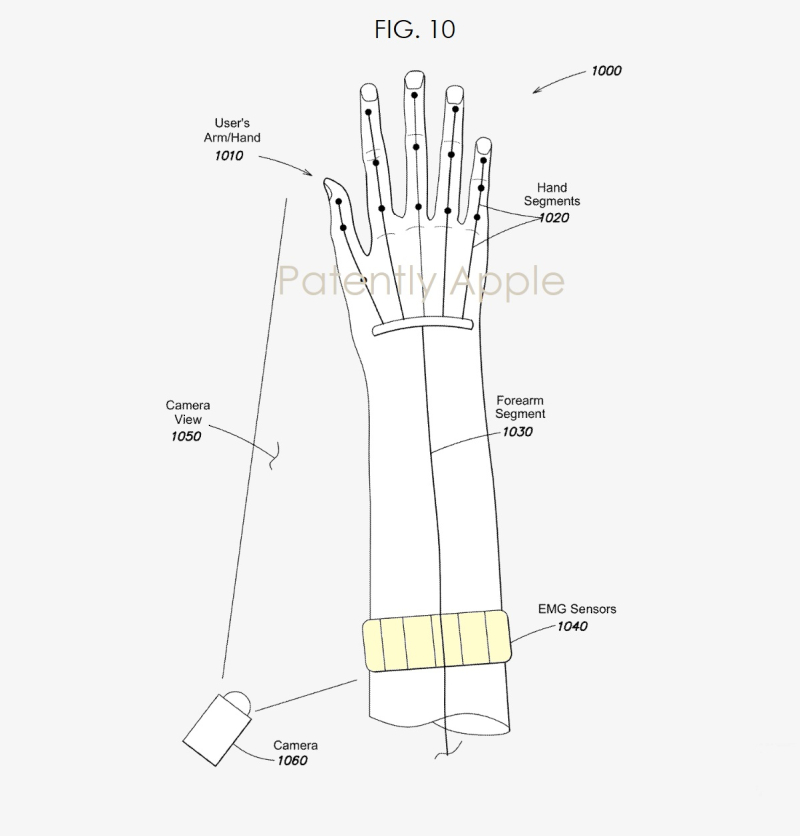 Facebook's engineers further note that the neuromuscular signals obtained by the plurality of neuromuscular sensors and the image(s) captured by the camera(s) may be used, for example, to determine a force that that the user is applying to the physical object. Neuromuscular signal data and auxiliary sensor data (e.g., camera data) may be combined in any other suitable way to determine information associated with the user's interaction with the physical object, and embodiments are not limited in this respect.

The process then proceeds to act where feedback based on the determined information about the interaction of the user with the physical object is provided. In some embodiments, the feedback is provided to the user interacting with the object. For example, the AR-based system may provide feedback (e.g., visual feedback, auditory feedback, haptic feedback) to the user within the AR environment.

Alternatively, the feedback may be provided using a visual indicator separate from the physical object. For example, an icon or other visual indicator may be displayed within the AR environment showing an interaction mode (e.g., paintbrush mode) for the object with which the user is interacting.

In some embodiments that provide feedback to the user, the feedback may be provided using non-visual forms of feedback such as auditory or haptic feedback. The feedback may, for example, instruct the user that the physical object that he/she is interacting with may have augmented properties or functions that may not be available through ordinary real-world interactions with the object.

Another aspect of Facebook's patent covers a toned down application for EMG sensors in the form of wearable patches. In some embodiments, the one or more sensor(s) (#110) may comprise a plurality of sensors and at least some of the plurality of sensors may be arranged as a portion of a wearable device structured to be worn on or around a part of a user's body.

Alternatively, at least some of the sensors may be arranged on a wearable patch structured to be affixed to a portion of the user's body. FIGS. 6A-6D show various types of wearable patches.

Facebook's patent FIG. 6A below shows a wearable patch (#62) in which circuitry for an electronic sensor may be printed on a flexible substrate that is structured to adhere to an arm, e.g., near a vein to sense blood flow in the user. The wearable patch may be an RFID-type patch, which may transmit sensed information wirelessly upon interrogation by an external device.

Facebook's patent FIG. 6B below shows a wearable patch (#64) in which an electronic sensor may be incorporated on a substrate that is structured to be worn on the user's forehead, e.g., to measure moisture from perspiration. The wearable patch (#64) may include circuitry for wireless communication, or may include a connector structured to be connectable to a cable, e.g., a cable attached to a helmet, a heads-mounted display, or another external device.