Google Joins the Race with Apple, Microsoft and Samsung to bring a Viable Smart Ring to Market after Amazon's Echo Loop Failed 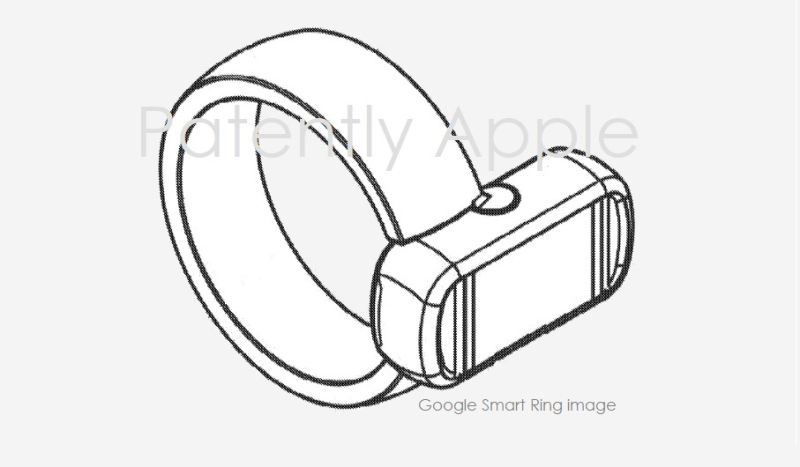 Amazon was the first big-tech company to bring a smart ring to market in late September 2019. They branded their Alexa-enabled smart ring the 'Echo Loop.' It wowed the tech crowd covering their new product event, but in November 2020 Amazon killed the Echo Loop instead of trying to improve upon it. For consumers it was $130 down the drain. Though that's unlikely the last we'll hear of smart rings, as Apple, Microsoft, Samsung and now Google are working on future smart rings. Patently Apple covered Apple's first smart ring patent back in 2015. The patent in-part noted that "the ring computing device is more portable than a mouse, doesn't require a computer, doesn't require eye contact with the touch screen, allows the user to not be tied to a computer, cellular phone, or tablet to certain control electronic devices (e.g., televisions), reduces the inefficiencies of mode switching by not requiring a user to move his or her hand off a keyboard to move a mouse or touchpad, and is smaller, more portable, and less obtrusive than existing devices.

The Apple Ring would come with touch-sensitive surfaces, gesture sensors, and/or voice-input recognition, a camera, microphone and more.

In some embodiments, the functions optionally include cursor control, video playback control, volume control, text capture, text entry, motion capture, or audio or video selection. Apple may even use it for gesture control in conjunction with a future mixed reality Headset and/or smartglasses. 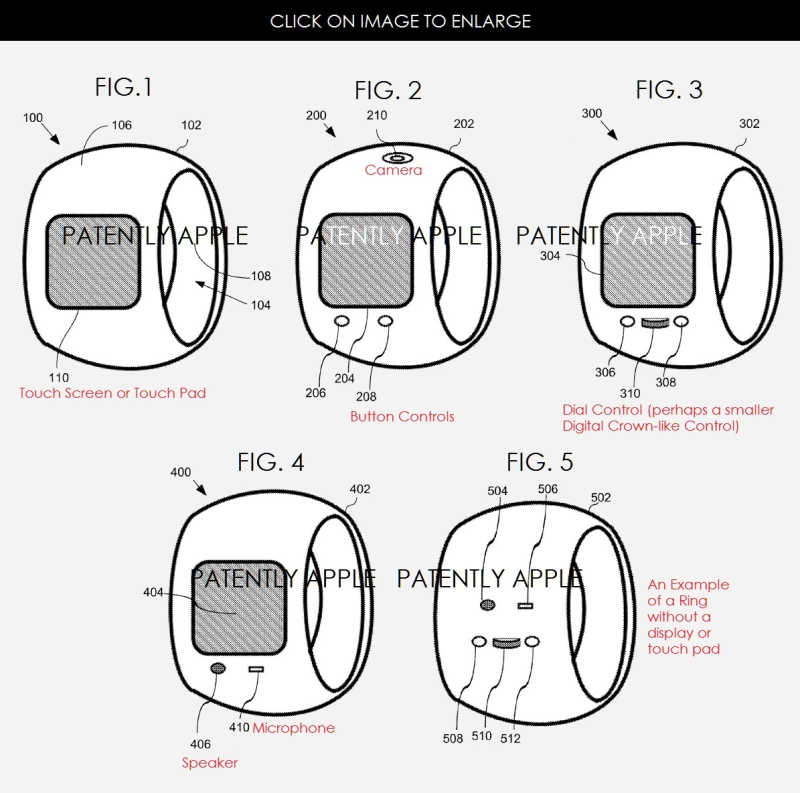 In October 2019 Apple was granted this patent. Apple updated their patent in December 2019 focused on the use of future gesture controls.

Apple's big projects are usually spread over several years and could extend to a decade or more in some cases as with the iPhone. While Apple isn't perfect, they definitely try to work on several aspects of a project using different teams working on different technologies in an effort to find ways to make a product useful and unique. This is to avoid bringing a product to market like the Echo Loop and killing it a year later.

The smart ring market is in search for a purpose at the moment. You could check out a list of smart rings available on the market today in this report by Wearable. The report covers rings to promote better sleep, act as a fitness tracker and more. Yet none have been a market hit.

In 2015 & 2016 patently Apple covered Microsoft patents for a future smart ring extensively, with one of the patent figures illustrated below. 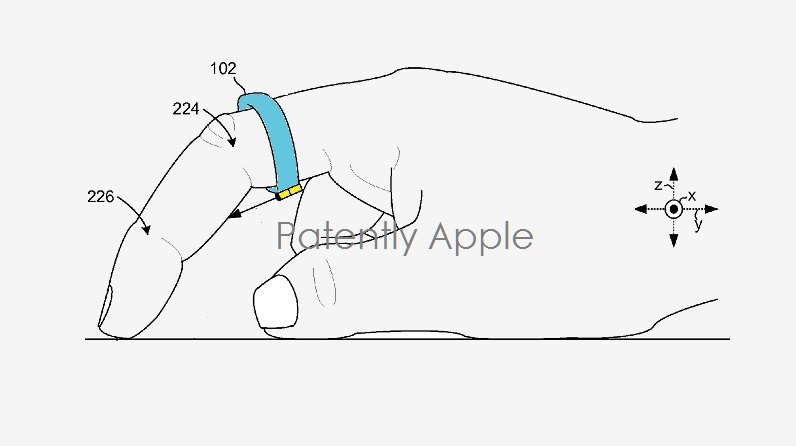 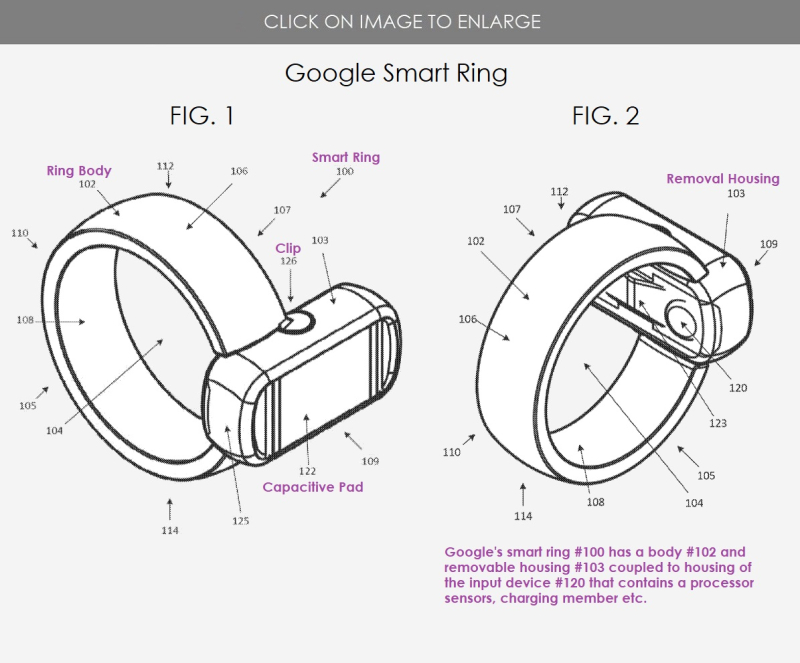 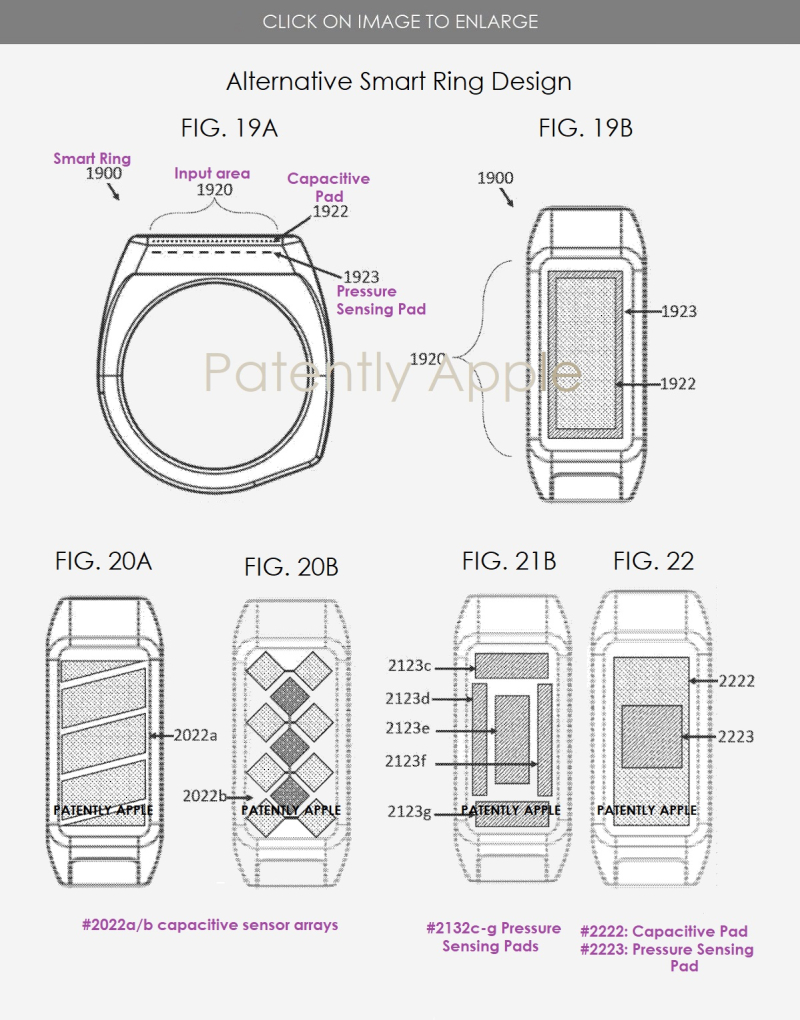 Google notes in their filing that the resolution of the touch screen or pad on some ring models could be approximately equal to that of the touch screen of a tablet, laptop or smartwatch today.  Google also notes that the capacitive pad on the ring is touch sensitive, allowing taps in different areas and scrolling along the outer surface of the smart ring.

The ring will work with wireless networks and will use a micro-USB charger. Google's patent is focused on the mechanics of the device rather than delve into any future scenarios where the ring could be used in specifically. For more information, you could review Google's patent here.

A year earlier, Google was granted a patent for a smart ring with a built-in camera that could work as an input device for future smart glasses as illustrated in Google's patent figures below. 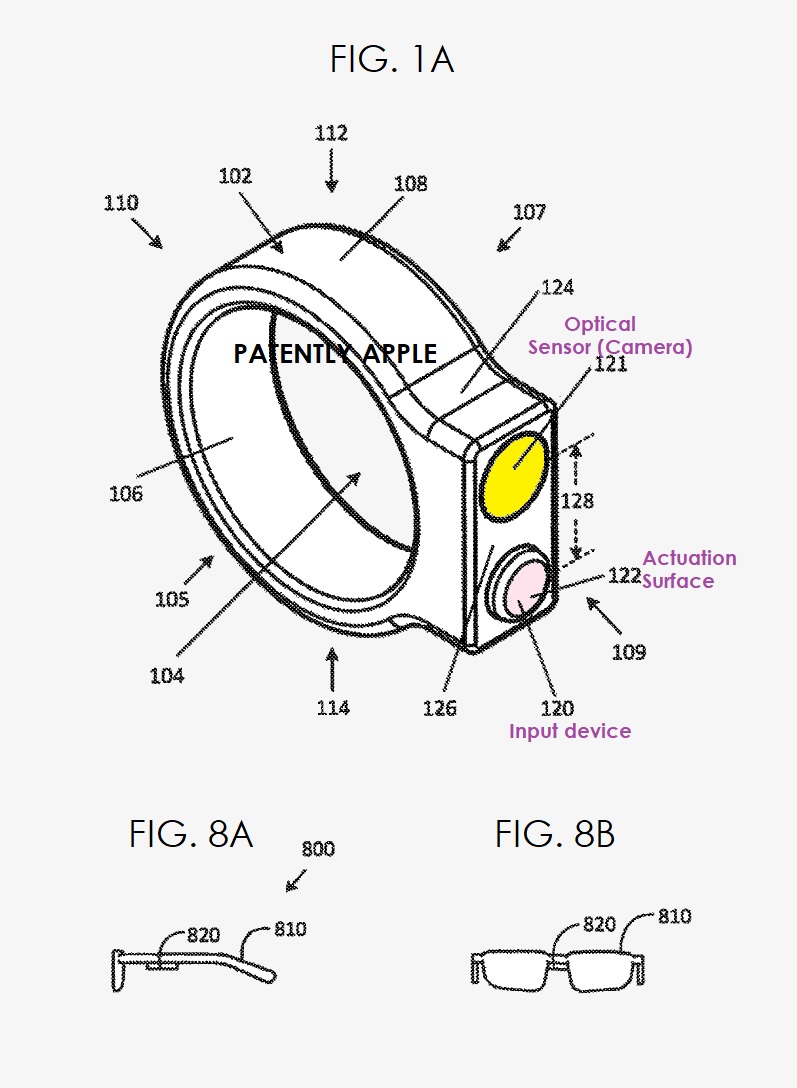 Google's granted patent 10,834,304 for a smart ring with a camera could be reviewed here for more details.

For now, the failure of Amazon's smart ring Echo Loop puts pressure on the other tech giants to think out the value of such a device before bringing it to market. Using a smart ring as an input device for future smart glasses and/or VR headsets could be a starting point and part of next-gen interfaces using a ring like a portable mouse.

Google thinks that their ring with a camera will be great for taking selfies. Maybe it's just me, but that's a tough one to swallow. Microsoft sees their ring working with Xbox and business whiteboarding. So there's a lot of possible ideas on the table and it's just a matter of time untill someone figures out a killer application for a ring that could motivate consumers to buy into the device.

Will Apple lead the way with smart rings in the future? Due to Apple's holistic approach to bringing a new-to-market device, a smart ring could take more time than the competiton. A smart ring could very well find a starting point as a navigation input device for menus displayed on smartglasses or a mixed reality headset.

In the short run, one of the other tech giants like Google, Samsung or Microsoft are likely to beat Apple to market. Though like Amazon, it won't really matter that much unless they deliver a killer app. While each patent from Apple's competitors delivers a hope that they have a winning device in the making, only time will tell who will emerge the victor.