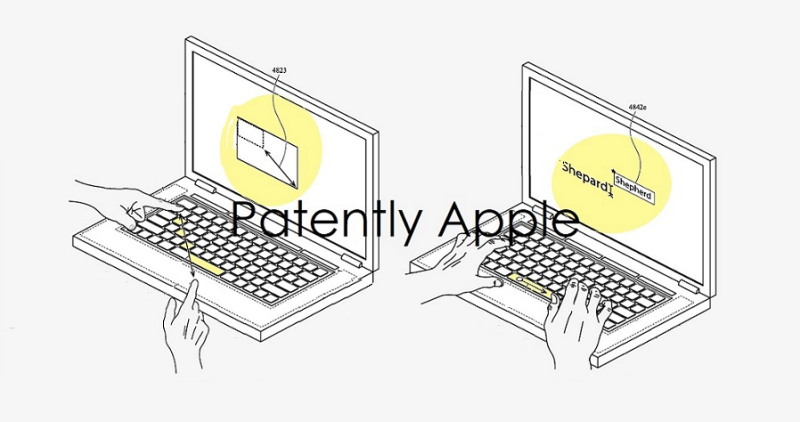 In September 2020 Patently Apple posted a patent update report (continuation patent) to Apple's May 2020 granted patent. One of the two patents covered in that report related to both having touch sensitivity added to the top of keys that could be used like a trackpad, as illustrated in our cover patent figures above. The patent also described how a keyboard could be applied and removed using magnets, very much like what Microsoft presented for the upcoming dual tablet branded the Surface Neo. The video below is set to start at the point where the magnetic keyboard comes into play.

This week the US Patent & Trademark Office published another granted patent from Apple that relates to a similar invention but with a few added twists including adding flexible support structures used in keyboards.

Apple's newly granted patent relates to an invention that covers keyboards and/or other input devices that include keycaps and at least one flexible structure attached to the keycaps. The flexible structure, such as, for example, a flexible membrane or woven layer, can provide flexible bridges or interkey supports between the keycaps that, in combination with the keycaps, make a substantially continuous and smoothed top surface for the input device. The top surface can therefore more easily be used as a touch-sensitive interface since it more easily allows the user to slide their finger across the keyboard.

Apple's patent FIG. 26 below illustrates an embodiment of a keyboard assembly #2600. In this embodiment, the flexible layer #2602 is positioned on top of the keycaps #2604 which are positioned on key stabilizers #2606 and above a base layer #308.

A user's finger or Apple Pencil could be moved across the top surfaces of the flexible layer and/or keycaps and could be used to control the electronic device in a manner separate from the actuation of switch structures that are actuated by pressing down on a keycap to mechanically actuate a switch. 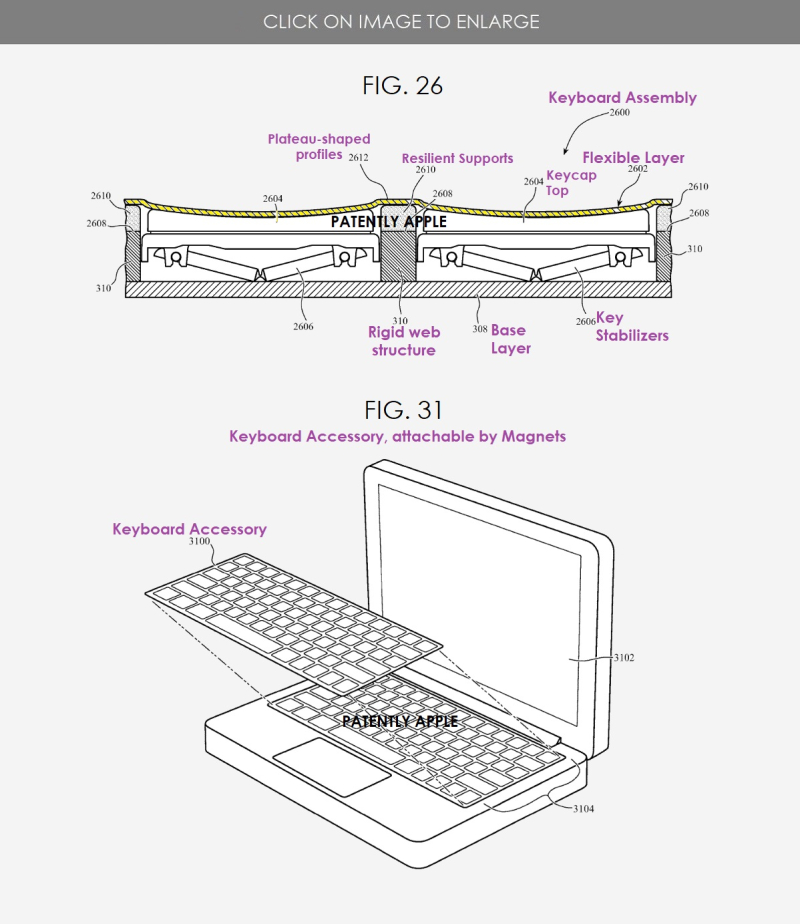 Apple's patent FIG. 31 above illustrates a schematic view of a keyboard accessory #3100 that is attachable to a device, a dual tablet device or a MacBook. Apple was granted another patent on Tuesday describing a dual display iPad device. The removable keyboard could be used in conjunction with that dual display device that somewhat resembles the upcoming Surface Neo from Microsoft.

Another key aspect and benefit of the new keyboard design is that it offers much higher resistance to penetration by unwanted materials such as debris and fluids.

A fabric with this material can be better protected against ultraviolet (UV) exposure and can create a barrier resisting liquid penetration through the fabric weave.

For a deeper dive into the details, see granted patent 11,087,937 titled "Interkey support for keyboards."

Considering that this is a granted patent, the timing of such a product to market is unknown at this time.