Home Archives Contact Us Subscribe Twitter MeWe Facebook Patently Mobile
Apple invents a future version of their Magic Keyboard that will be able to recharge an iPhone, Apple Watch & more
Apple envisions an iPhone being used as a 3D Controller for VR games on a future Headset 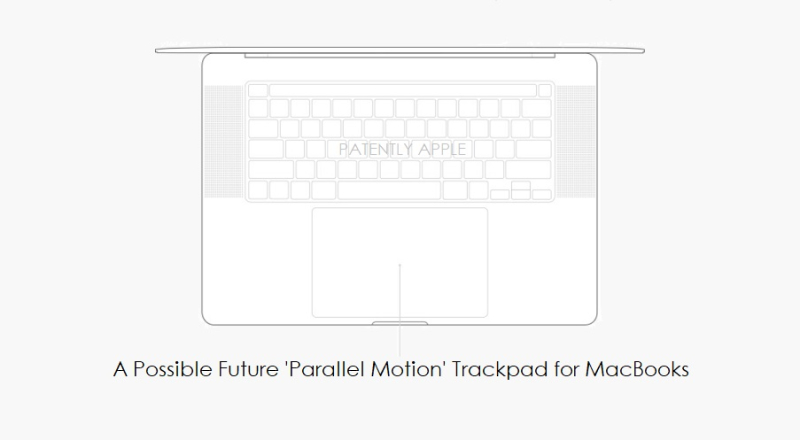 Trackpads can also receive touch gestures in which a user slides multiple fingers across the trackpad to initiate different functions such as scrolling or zooming. Apple is constantly looking to provide users with improvements and enhancements that will deliver an overall superior user experience.

Apple notes that although some trackpads implement capacitive touch sensors and force sensors, they may not be as intuitive and comfortable to use if they don't provide feedback to the user when a touch or downward force is applied by the user.

Aspects of Apple's invention relate to trackpads that are more effective and comfortable to use at all points on the touch surface. The trackpad can comprise a touch plate or cover that the user touches, a touch sensor configured to detect the position of a touch on the plate or cover, and a support mechanism supporting the cover so that it translates along a vertical axis with substantially no rotation of the top surface, even when the user provides a downward force to "click into" the surface of the trackpad at multiple different ends of the trackpad.

For example, the support mechanism can be configured to equally vertically translate the cover at least three different evenly-spaced-apart points on the top surface when a downward force is applied to one of the three points. In this way, the trackpad can require a single magnitude of downward force to translate the cover at least three points that are equally spaced from the center of the trackpad.

The at least three points can be positioned on a substantially circular or elliptical line centered at or near the middle of the trackpad. A series of other concentric and substantially circular or elliptical lines can be positioned radially within or outward from that line, wherein along each line, there are a continuous set of input points at which the cover evenly deflects when a downward force is applied to one of the input points.

The heart of the patent is about a trackpad with "Parallel Motion." Apple defines it this way: In some embodiments, this movement of the trackpad cover can be referred to as "parallel motion" since the top surface of the cover remains substantially parallel to a support surface below the trackpad or a surface surrounding the borders of the trackpad while the cover moves, unlike a "diving board"-type trackpad that rotates or pivots about one outer edge when its top surface moves and therefore tilts and loses its parallel orientation relative to the support surface.

In some embodiments, the parallel motion of the cover is defined by opposite side portions of the touch surface moving with equal vertical displacement when a downward force is applied to one of the opposite sides.

Apple's patent FIG. 1 illustrates a trackpad on a MacBook with FIG. 2 illustrating an exploded view of the mechanics behind a newly designed trackpad; FIG. 5 illustrates a diagrammatic side view of a trackpad with the function of a parallel motion trackpad.

Parallel motion of the cover is defined by opposite side portions of the touch surface moving with equal vertical displacement when a downward force is applied to one of the opposite sides. Apple's patent application 20210263556 is a highly technical patent that computer hardware engineers or super-geeks may find of interest drilling into the details of the mechanics behind this invention.