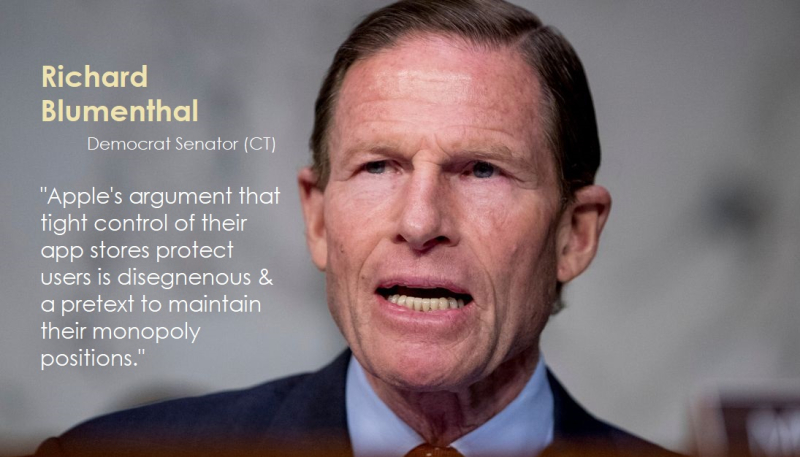 It's being reported this afternoon that a new bipartisan bill announced Wednesday seeks to bring more competition to the app store market currently dominated by Apple and Google.

The Open App Markets Act, led by Sens. Marsha Blackburn, R-Tenn., and Richard Blumenthal, D-Conn., and Amy Klobuchar, D-Minn., would shake up the business model of both company’s app stores and the structure of their mobile operating systems.

They also would be prohibited from keeping developers from communicating with app users about 'legitimate business offers,' or from punishing developers for using different pricing terms through another system. Developers have complained of being unable to advertise lower prices that customers could receive off of the apps, which would allow them to circumvent app store fees.

The bill would aim to keep app stores from disadvantaging certain developers and allow for third-party app stores. While third party-app stores are available to Google’s Android users, Apple only allows app downloads through its own store.

The bill would also allow for apps to be sideloaded, meaning they don’t need to be downloaded from an official app store. Apple in particular has expressed concern that sideloading could open consumers’ phones to security vulnerabilities.

The legislation does leave room for Apple and Google to make the case that their in-app payment systems and other tools or protocols are necessary for security purposes. The bill says that any platform covered by the legislation would not be in violation if an action is necessary for user privacy or security, a fraud prevention effort or a way to comply with federal or state law.

Senator Blumenthal (D) said in an interview Wednesday on CNBC’s 'Power Lunch' show that Apple and Google’s arguments that tight control of their app stores protect users’ security is a "pretext to maintain their monopoly position."

Blumenthal added: "It is not only disingenuous it’s ironic because they’re the ones who are actually invading privacy and stealing data from the developers and all the while they’re saying, ‘Oh, well, we’re the privacy protectors.' In fact, our legislation in Section 4 has a specific provision that protects privacy, even more than it is now. So this kind of argument is totally bogus and I think it is going to be absolutely transparent that, actually, privacy would be better protected with this legislation."

On the same CNBC show Senator Blackburn (R) said that she envisions other app store choices for consumers and more innovation under the bill. She said she sees the current situation as an 'opportunity cost' that keeps some developers out of the market.

Under the bill, the Federal Trade Commission and state attorneys general could take action against the platforms. Developers would also be entitled to sue for injunctive relief. For more on this, read the full CNBC report.

Below is a copy of the bill introduced today.

Apple's Response: "Since our founding, we’ve always put our users at the center of everything we do, and the App Store is the cornerstone of our work to connect developers and customers in a way that is safe and trustworthy. The result has been an unprecedented engine of economic growth and innovation, one that now supports more than 2.1 million jobs across all 50 states. At Apple, our focus is on maintaining an App Store where people can have confidence that every app must meet our rigorous guidelines and their privacy and security is protected."