Home Archives Contact Us Subscribe Twitter MeWe Facebook Patently Mobile
President Biden to sign a new Executive Order consisting of 72 actions this afternoon that are aimed at cracking down on Big Tech
New Ad: Is Finding your lost Smartphone like a Needle in a Haystack? Well, it's not an issue for Apple Watch users in finding their iPhone

When first testing the new M1 Processor, Apple's VP of Marketing was stunned by its performance and thought that the battery indicator was broken 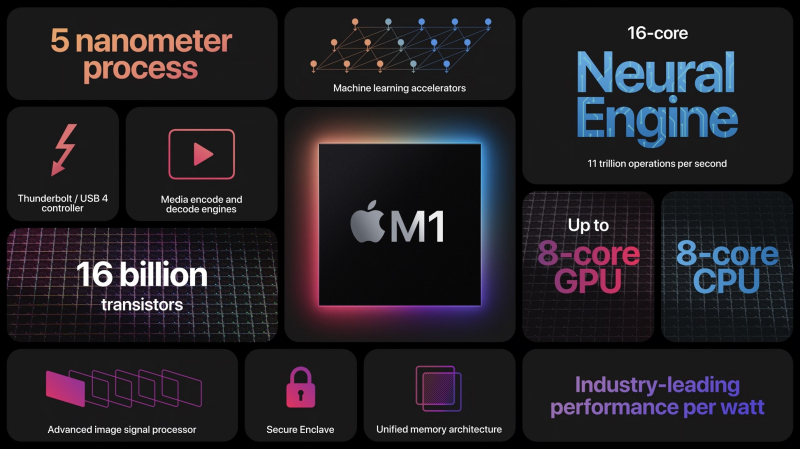 Last Friday Patently Apple posted a report titled "Qualcomm's CEO thinks that their new Nuvia-based Laptop chip for PC OEMs in 2022 will be able to compete with Apple's Powerhouse M1." The report noted that "Qualcomm Inc's new chief thought that by next year his company would have just the chip for laptop makers wondering how they can compete with Apple, which last year introduced laptops using a custom-designed central processor chip that boasts longer battery life."

Apple's long battery life is just one of the attributes that Qualcomm wants to match. It's also caught industry's attention. to get the M1 to truly sing, Apple couldn’t merely take an A Series Bionic chip from an iPhone and stuff it inside a Mac. It required a dramatic increase in performance while delivering class-leading endurance, as well as an intense collaboration between the engineers and Apple’s software team.

The M1 chip, which powers the MacBook Pro M1, MacBook Air M1, Mac mini, iPad Pro 2021 and the new iMac 24-inch, is a 5-nanometer chip that packs in 16 billion transistors and offers the best performance per watt we’ve ever seen.

The most striking thing about the M1 is its battery life. For example, the MacBook Pro lasted an astounding 16 hours and 25 minutes in our web-surfing test. The previous Intel model lasted 10:21. That’s a huge difference, and this increase caused more than one double take within Apple.

In a newly posted Tom's Guide interview with Bob Borchers, Apple's VP of worldwide product marketing, he noted that "When we saw that first system and then played with it for a few hours and the battery didn't move, we thought ‘Oh man, that's a bug, the battery indicator is broken. And then Tim Millet,  VP of platform architecture at Apple, was laughing in the background, ‘Nope, that's the way it's supposed to be’ and it was pretty phenomenal."

You could read more on this in Tom's Guide report.