Home Archives Contact Us Subscribe Twitter MeWe Facebook Patently Mobile
The Race is on: Both Apple and Samsung are working on delivering future smartphones with an underwater mode
House Republicans take their turn laying out their antitrust agenda against Apple, Facebook and others 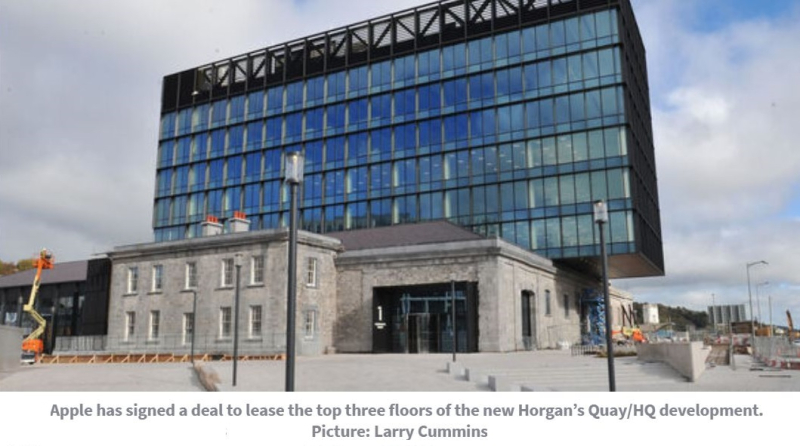 There was a report today from an Irish publication about Apple having the top three floors of a new office complex in Cork, Ireland. However, this is old news having been reported on first by the Irish Examiner on March 8th 2021.

The Irish Examiner's report noted at the time that "a new office development on Cork city’s north quay has landed ‘the Big Apple’ – the Horgan’s Quay/HQ development next to Kent rail station has done a deal on over 36,000 sq ft of offices for tech giant Apple, which already employs c 6,000 in the city at two other locations.

In nailing the prestigious deal with Apple, Horgan’s Quay developer Clarendon Properties and BAM have pipped competing developers’ O’Callaghan Properties’ offices scheme Navigation Square, on the opposite side of the Lee on Albert Quay.

Apple is this month closing out a deal for enough space for 350 to 400 additional employees initially, at Horgan’s Quay, in the top three floors of building No 1. The high-spec, energy-efficient building is ready for occupation/fit-out, overlooks the River Lee and is adjacent to the new 120-bed Dean Hotel.

The Apple deal has options for further space if and when required within the scheme which will have 300,000 sq. ft. of offices in all, and has planning permission also for 325 apartments, as well as the hotel, retail and new plaza in an evolving public transport hub. There's much more to the story from the Irish Examiner.