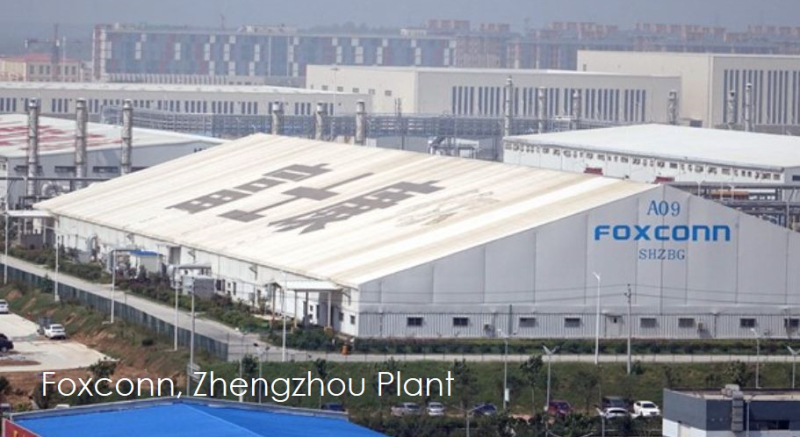 Earlier this morning we posted a report titled "Apple has committed to donating to the flood rescue and reconstruction work in Henan Province, Home of the largest iPhone Plant." The report noted that Foxconn specifically told CNBC that it had “activated an emergency response plan for flood control measures in that location.” Foxconn's spokesperson added that "We can confirm that there has been no direct impact on our facility in that location to date and we are closely monitoring the situation and will provide any updates as appropriate." What wasn't said in that statement was that Foxconn has unofficially given employees the day (or more) off due to the flooding.

A new report by the South China Morning Post states that tens of thousands of workers at two Foxconn facilities in Zhengzhou were told not to show up to work, though the largest plant remained open. Dubbed iPhone City, the Henan capital has already seen several deaths and catastrophic damage from flooding caused by record rainfall.

Workers at Foxconn plants in Zhongmu county and the Zhengzhou Export Processing Zone said they have been given a day off after the provincial capital was hit by record rainfall. The worst flood to hit Henan in nearly a century has so far claimed at least 25 lives and displaced more than 100,000 people throughout the province.

The company is the world’s largest contract manufacturer of electronic gadgets and best known for assembling Apple’s iPhones, iPads and smartwatches. Zhengzhou, a city of 10 million people, is often dubbed iPhone City, because more than half of Apple’s smartphones are assembled there at Foxconn facilities.

The company’s biggest plant in the city, with the capacity to churn out 500,000 phones a day, is located near the city’s airport, while the two affected plants are smaller assemblies. Its combined workforce of the Zhengzhou facilities surpasses 250,000, according to Chinese media, and has occasionally exceeded 300,000.

The revelation by Foxconn employees that they've been given the day off (at least) was contradicted by the "official" statement that employees were required to show up at work.

However,  the South China Morning Post confirmed that "Floodwater has already inundated the interior of Foxconn’s Zhongmu plant (technically in Zhengzhou Export Processing Zone), with water spilling down the stairs from at least the third floor, according to online footage shared on Chinese social media. Workers were seen wading knee-deep through water while departing the plant.

An unnamed manager at Foxconn in Zhengzhou told Chinese state media Time Weekly on Wednesday that “personnel within the campus in Zhengzhou remain safe from the flood and the company will make adjustments depending on circumstances surrounding the flood."

Zhongmu county authorities issued an emergency notice last night, ordering civilians to prepare for evacuation and banning them from leaving home. The upstream Changzhuang reservoir was in danger of overflowing, according to state media. More than 150 armed police officers equipped with rubber dinghies were dispatched last night to rescue trapped civilians across the county.