Home Archives Contact Us Subscribe Twitter Facebook Patently Mobile
Prior to the Epic Case Decision, Apple wins in Blix Case, another member of the "Coalition for App Fairness" fighting Apple in the U.S.+
Apple has Won a Patent relating to Future Avatar Body Movements in Real Time 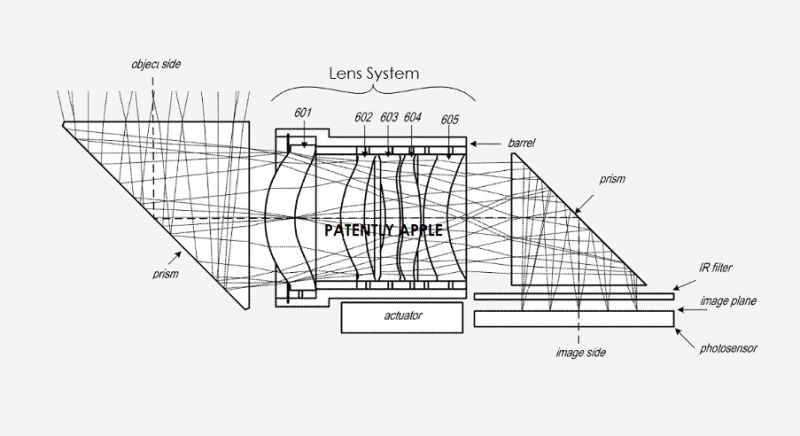 Earlier this morning Patently Apple posted a report titled "Apple Suppliers LG InnoTek and Corning Share Patents on a next-gen "Liquid Lens" that could replace the need for a Periscope Zoom Lens." A periscope lens is a folded lens system. Talk of the devil, the U.S. Patent and Trademark Office officially granted Apple a patent today that relates to small form factor camera and foldable lens systems.

Apple's granted patent provides a folded camera that may, for example, be used in small form factor cameras. Embodiments of a folded camera include two light folding elements (e.g., prisms) and an independent lens system located between the two prisms that includes an aperture stop and lens elements with refractive power mounted in a lens barrel. The prisms and lens system may collectively be referred to as an optical system.

The prisms provide a "folded" optical axis for the camera, for example to reduce the Z-height of the camera. The lens system includes a lens stack including one or more refractive lens elements mounted in a lens barrel, and an aperture stop located at or in front of a first lens element in the stack. A first prism redirects light from an object field from a first axis (AX 1) to the lens system on a second axis (AX 2). The lens element(s) in the lens stack receive the light through the aperture stop and refract the light to a second prism that redirects the light onto a third axis (AX 3) on which a photosensor of the camera is disposed. The redirected light forms an image plane at or near the surface of the photosensor. 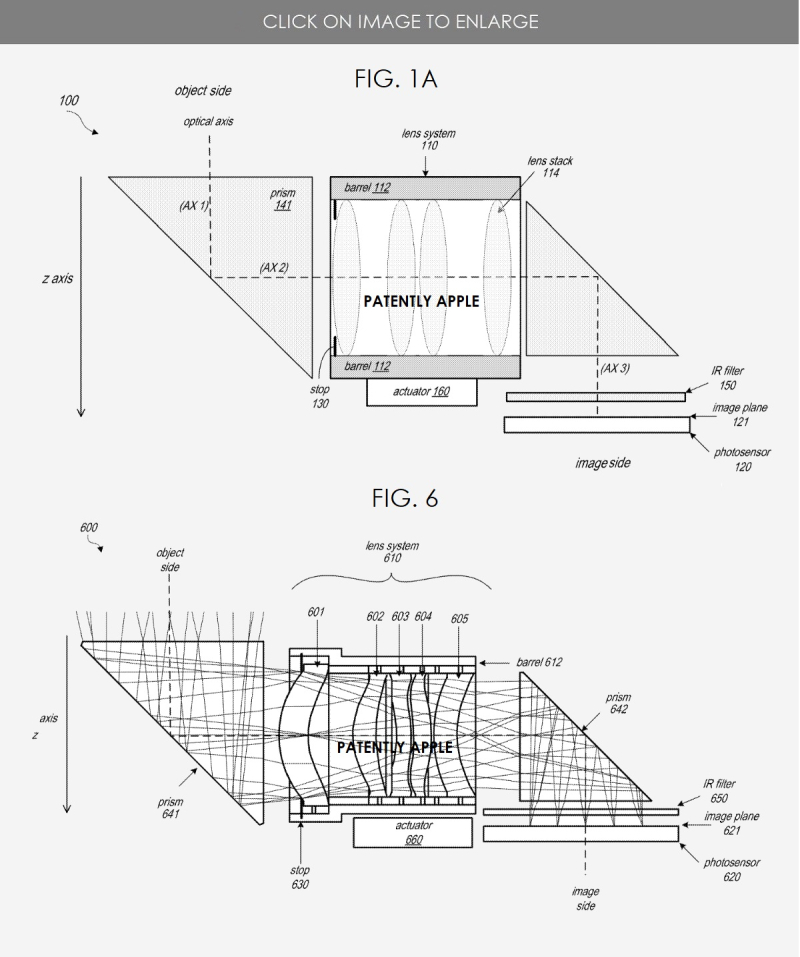 Apple further notes that the camera system (#600 above) also includes a photosensor (#620), and may also include an optional infrared (IR) filter. A camera including an embodiment of the lens system (#610) as illustrated in FIG. 6 may, for example, be implemented in portable electronic devices such as mobile phones and tablets. Embodiments of the lens system may provide a low F-number (<=2.4), 3.times. optical zoom, and high-resolution imaging.

02: "Apple Patents Reveal a Camera with Folded Optics that Apple states could apply to a Telephoto Lens and more"