Home Archives Contact Us Subscribe Twitter MeWe Facebook Patently Mobile
In Q1 2021 Apple Recorded its Best-Ever Quarterly sales of MacBooks and iPads in India
The Wait is Over: Apple TV+ announces that "The Morning Show," returns on September 17, 2021 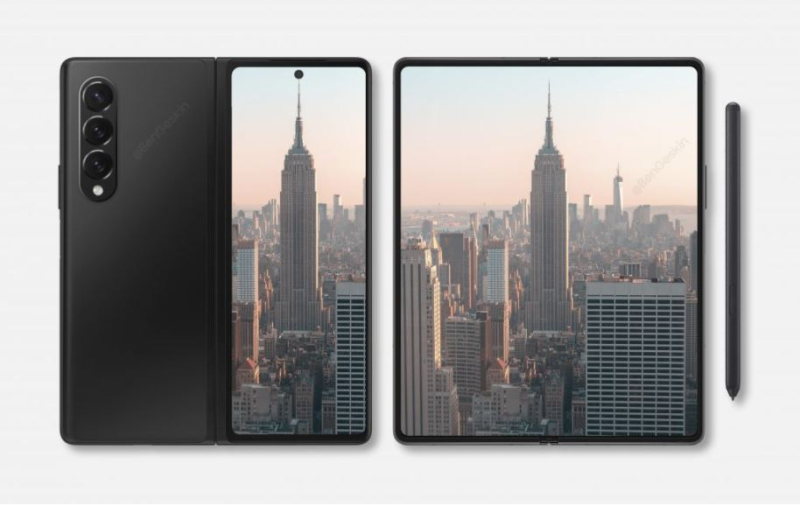 A few times a month Patently Apple checks out the patent filings of various industry players like Google, Facebook, Microsoft and Samsung just to see what their engineers are working on, looking for possible industry trends. Some of Samsung's latest patent filings have presented advancements to their foldable device product line, an ultra-thin smartphone and a levitating television concept – which sounds cooler than what it is.

Below is a spattering of patent figures and links to patent filings that you could check out if you happen to love technology no matter who makes it and if you want to check out what the competition is working and/or focusing on.

Samsung is currently preparing to launch a new round of foldable devices during an August event covering at least the Galaxy Z Fold 3 and Flip 3. Leaks have predicted that the Z Fold will support an under display camera and S Pen input, though not provide a hidden cavity for the pen like the Galaxy Note does.

Samsung's latest patent illustrating support for the S Pen on a future Galaxy Z Fold device was published by the U.S. Patent Office last Thursday under number 20210173437 with key patent figures presented below.  Patent FIG. 2 is a perspective view of the foldable display device in an in-folded state; FIG. 5 is a perspective view showing a first digitizer and a connection set coupled to the first digitizer in accordance with the embodiment of the present disclosure. 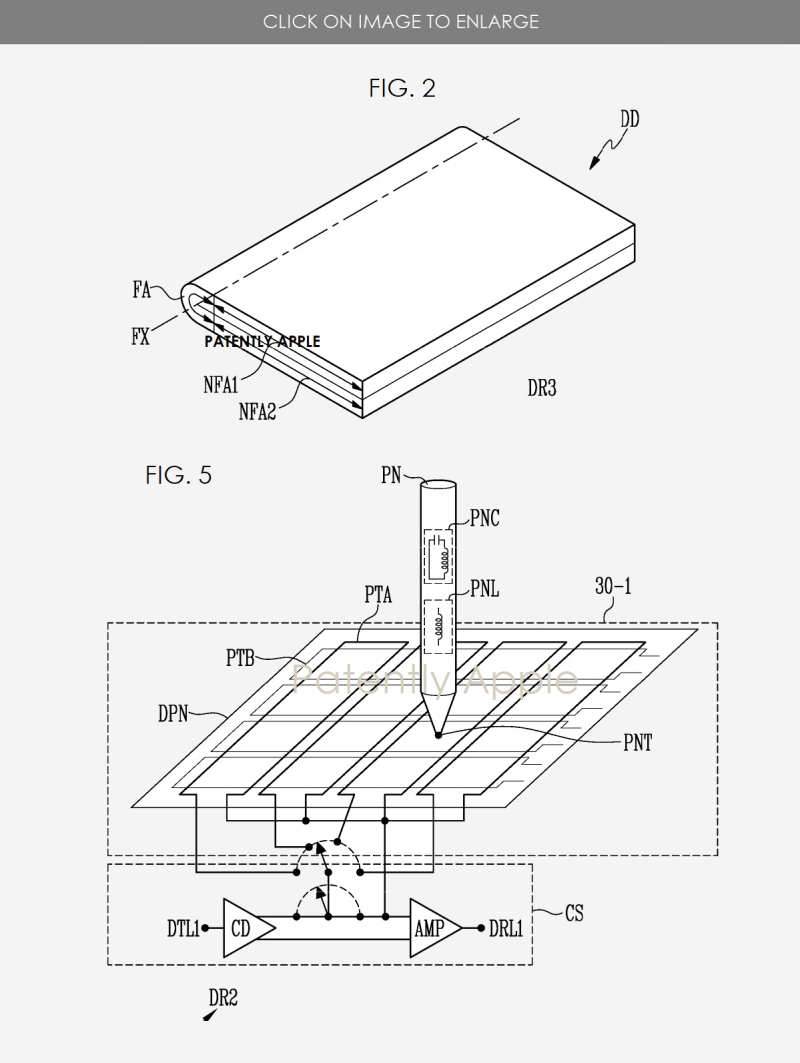 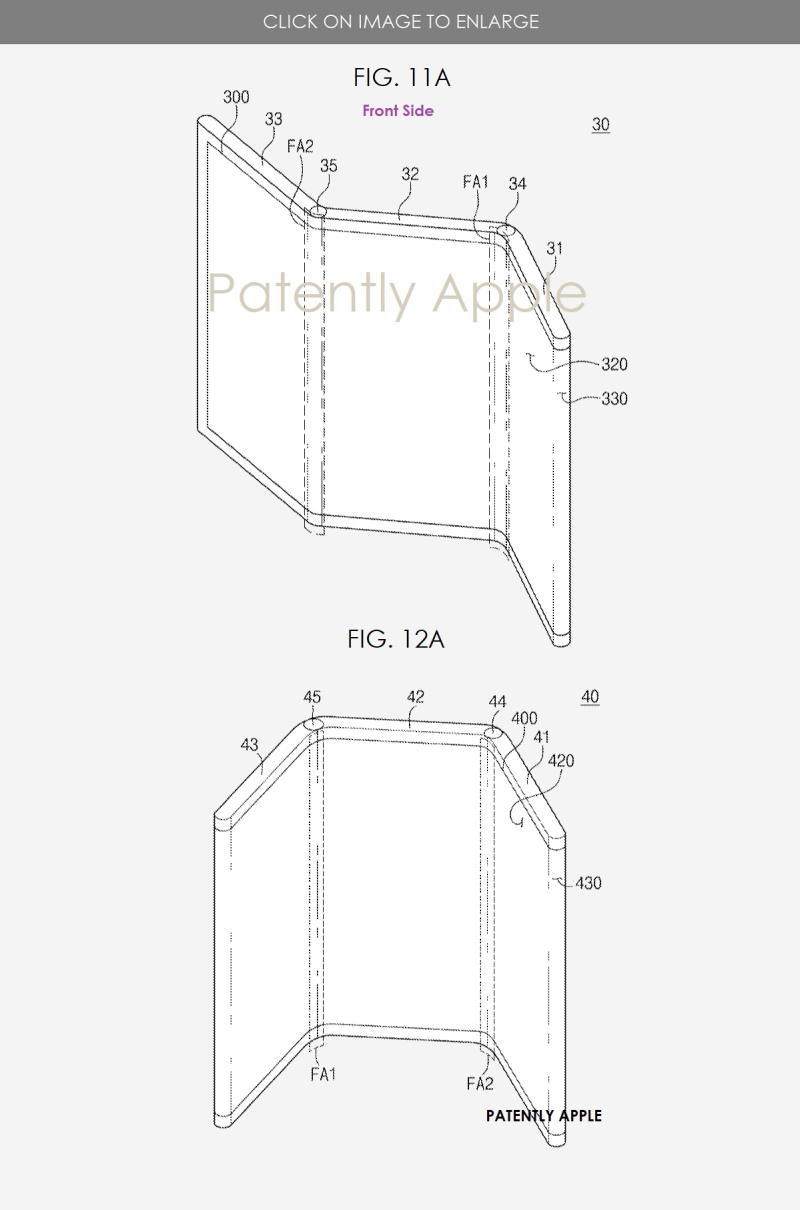 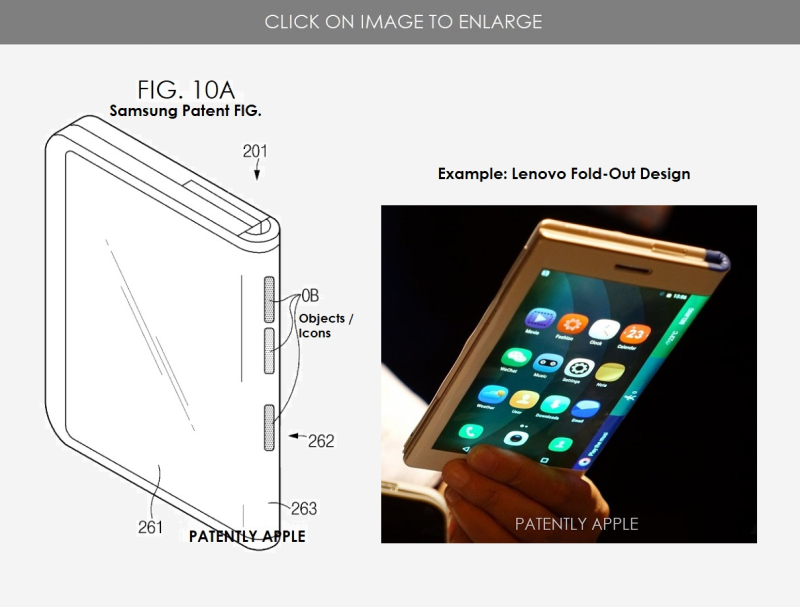 To support Samsung's utility patent for a "Fold-Out" form factor, Samsung was also granted design patent D921,692 for a "Fold-Out" smartphone form factor which makes it an official design. However, it doesn't guarantee that Samsung will proceed to market with this design.  The U.S. Patent Office granted Samsung this patent on June 8, 2021. 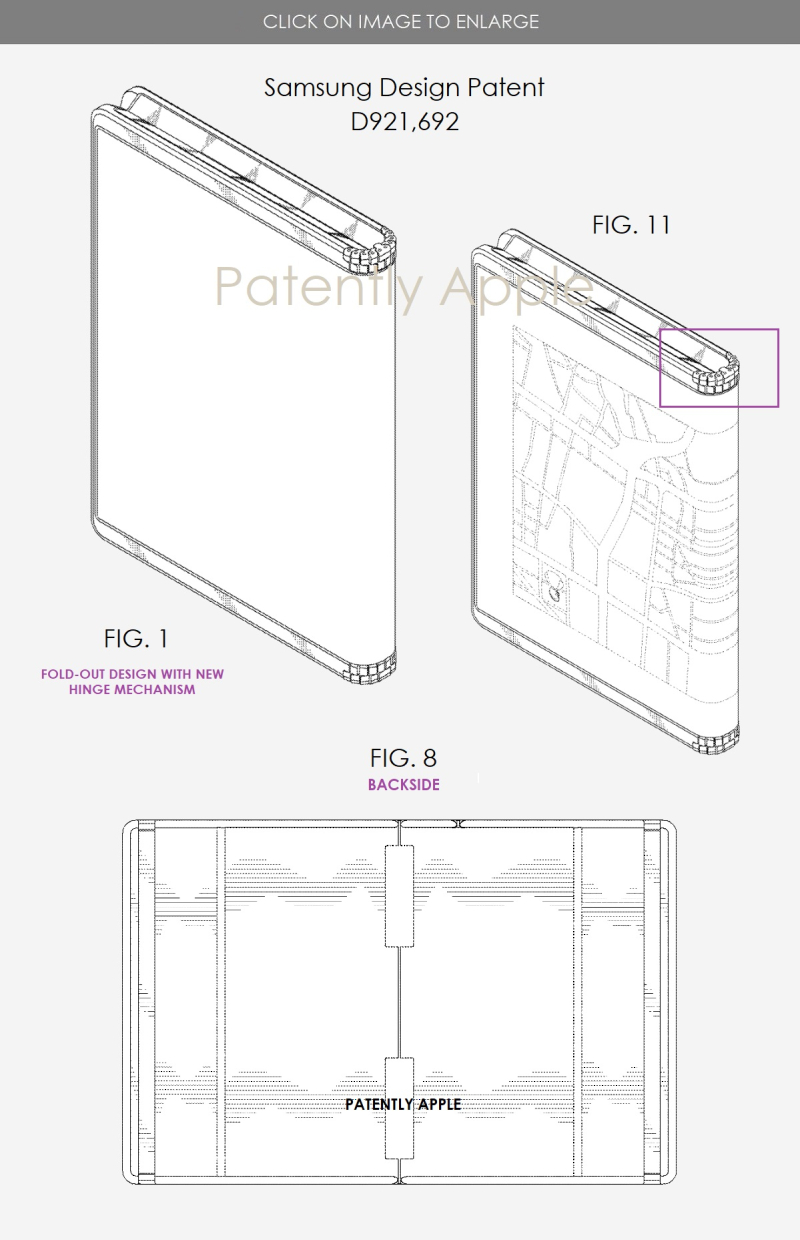 Last Tuesday Samsung was granted a patent for a possible future Galaxy smartphone with a half-size backside display supporting a camera application that supports taking selfies with the higher quality backside camera. 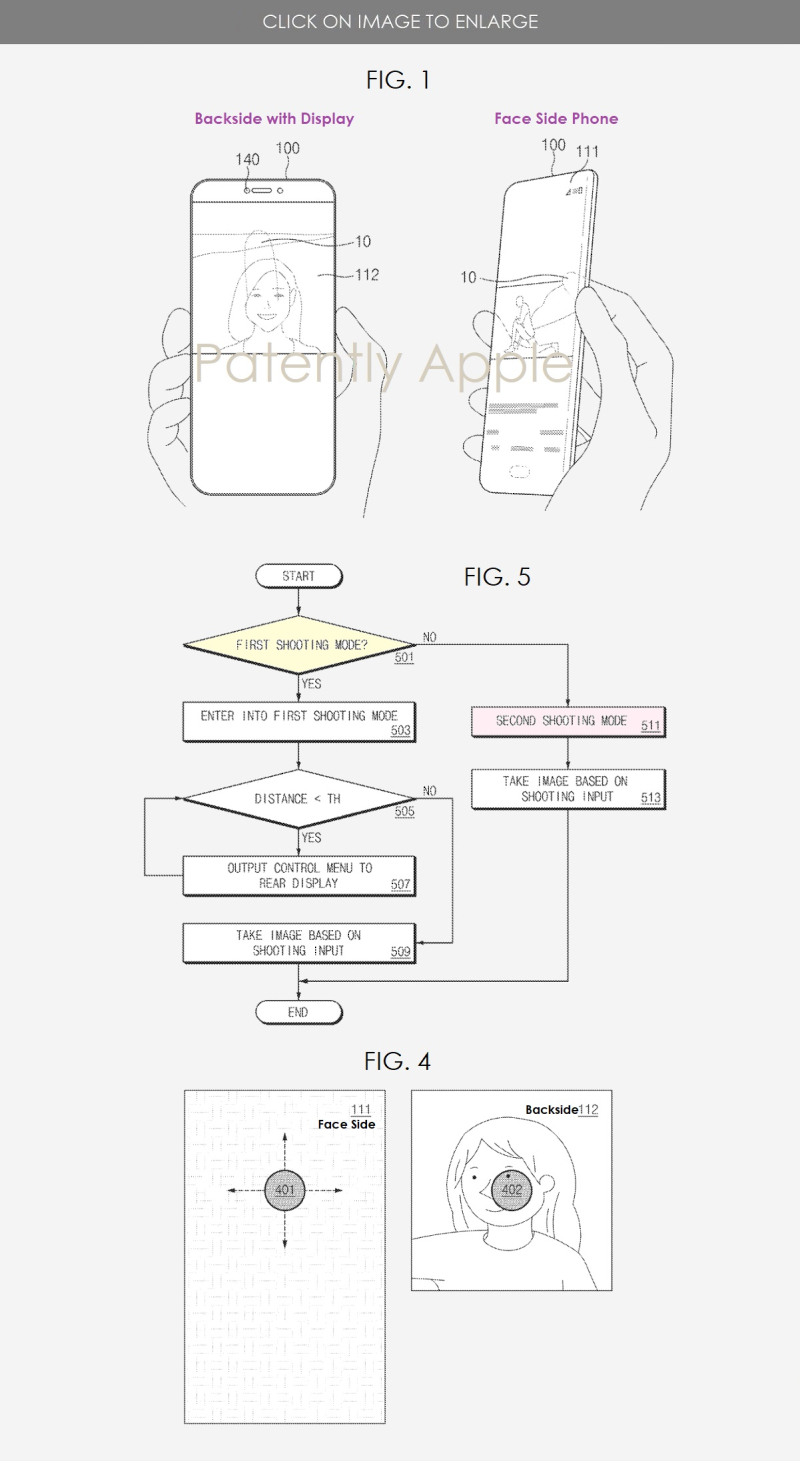 For those interested in diving in further for details, check out Samsung's Granted patent 11,029,907 published on June 8, 2021.

Apple filed for a similar patent that we covered in a February 2021 IP report. 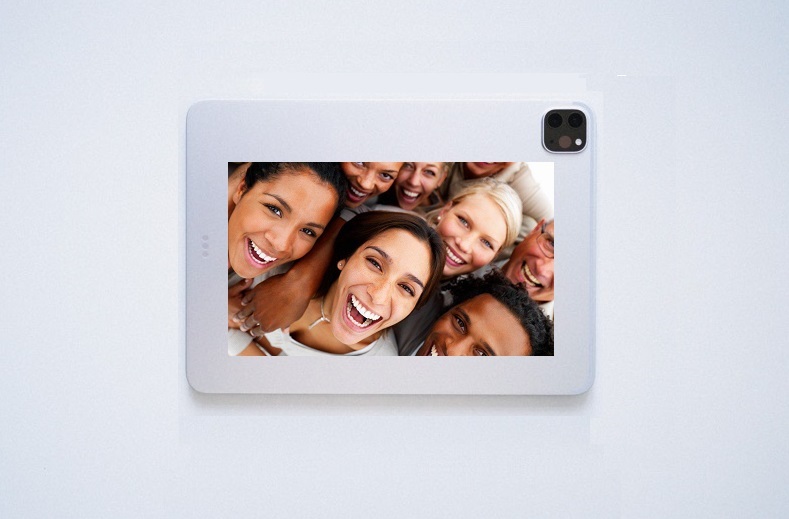 A Different Kind of Smartphone Case

Samsung was granted a different kind of smartphone case on June 1, 2021 that leaves the back of the phone uncovered so that a design or color could clearly be seen. The front of the cover comes with a clear glass-like face. 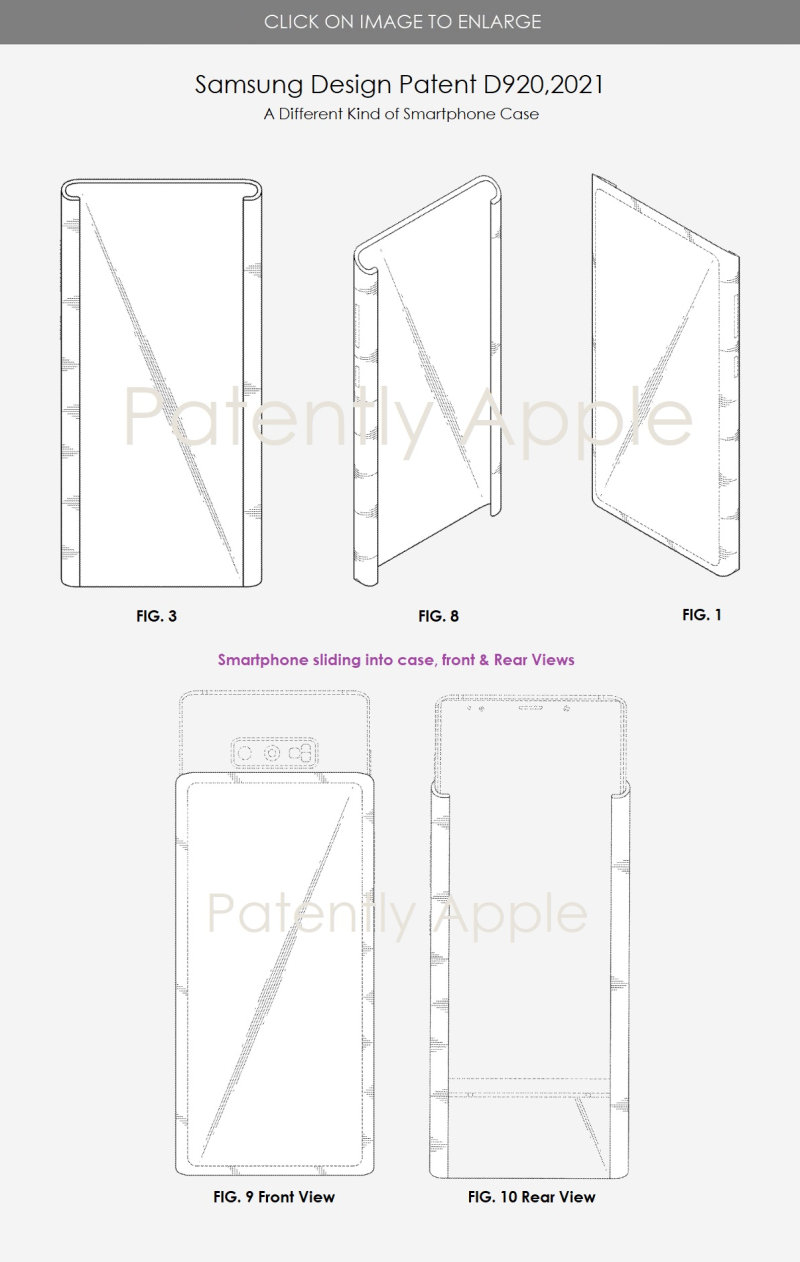 That would also be a nice choice for the iPhone so that Apple's hot colors could be easily seen on the backside of the case along with the original Apple logo.

Lastly, Samsung has filed a patent for a levitating TV. It's not as sexy as it sounds, as it's like a smoke and mirrors illusion. Though if you don't know the trick behind the illusion, then it works. The images from the patent below illustrate a TV suspended in the middle of a thick frame.

I would suspect that a finished product would come with a clear glass frame that would make it look like the TV is suspended in air. If the frame as shown is to stay, then it may be designed to fit into a wall unit or right into a wall so that the frame simply disappears. You could check out the patent application's full details here. 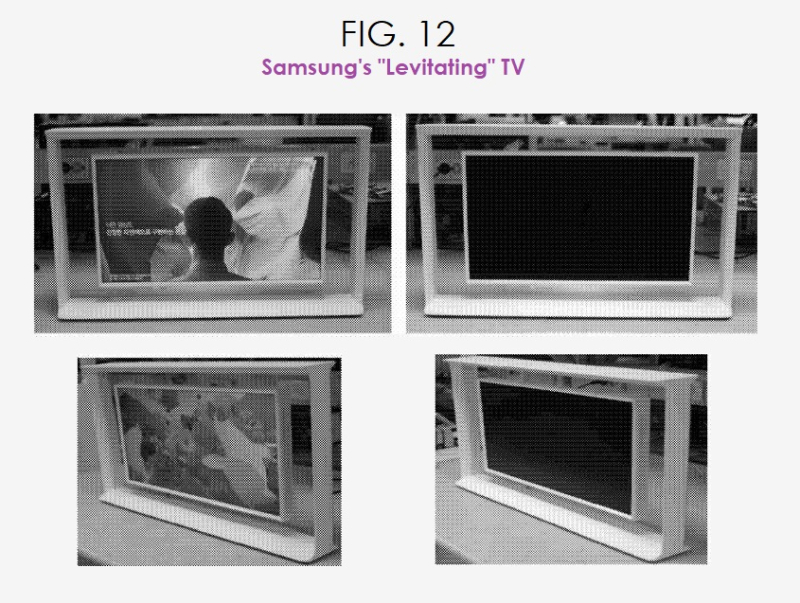