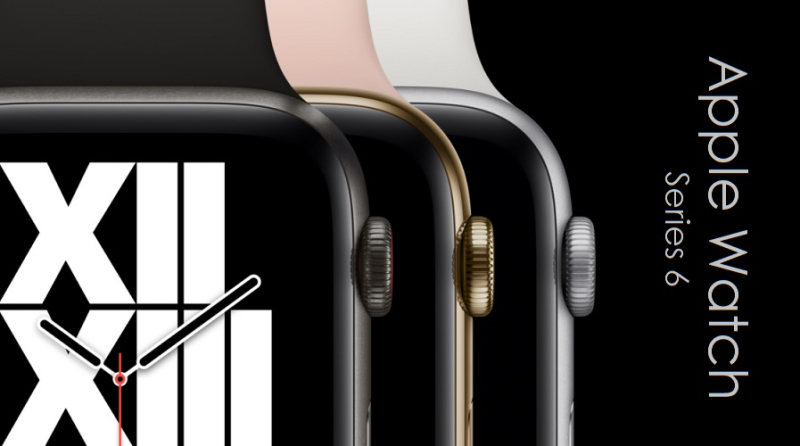 It's no secret that Apple completely dominates the global smartwatch market as confirmed in an analytical report published last week. Ease of use, aggressive marketing, global market grasp and branding make Apple the top player in the segment.

Producing an Apple Watch Series 6, Apple’s latest smartwatch model, costs the company around $136, a bill of materials (BoM) analysis by Counterpoint’s Component Research Practice. The smartwatch’s application processor, display, sensors and casing together account for ~68% of the total device value.

Senior Analyst, Ethan Qi: "Apple Watch makes for a perfect companion device whether you are out doing yoga or a casual workout. With the ongoing pandemic and the increase in health consciousness among people, Apple’s inclusion of surplus sensors is what makes it a resourceful confidant. Further, the growing app ecosystem and services integration like Apple Fitness+ are driving more users to purchase Apple Watch." 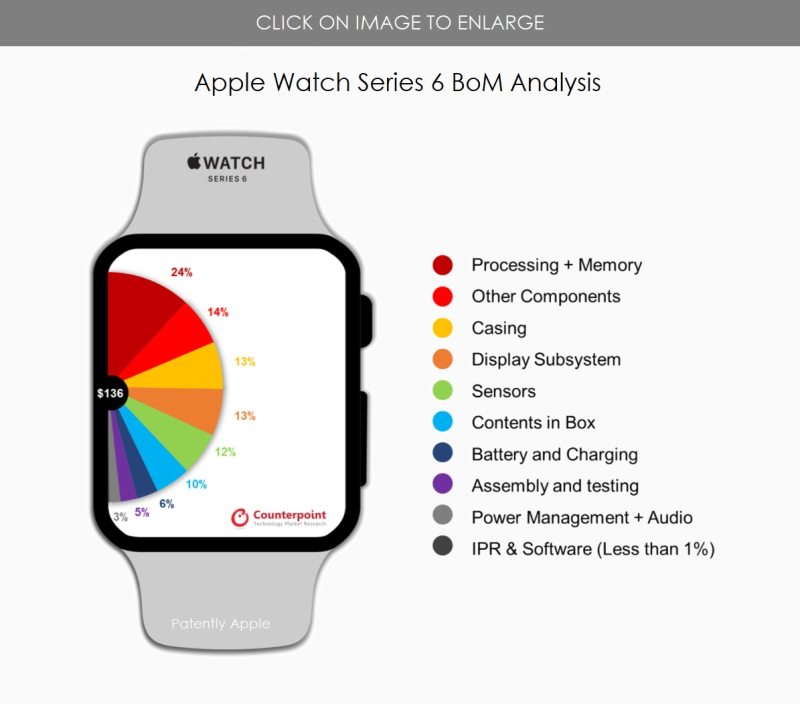 Starting with the display, the Apple S6 comes with an Always-On Retina LTPO (low-temperature polycrystalline oxide) OLED screen, supporting 1,000 nits of peak brightness. Apple’s exclusion of the Force Touch gasket in this model, while keeping the BoM cost down, makes the watch a bit slimmer by 0.3 mm compared to the earlier generation. Display and the touch module, along with the strengthened ION-X glass, amount to slightly over 13.2% of the total device BoM.

The new S6 SIP (System-in-Package), which Apple claims is 20% faster than the S5, features dual cores that are based on the A13’s energy-efficient “little” Thunder cores running at 1.8 GHz. The connectivity department also sees an advancement with Apple’s W3 chip handling the wireless part, which includes dual-band Wi-Fi support and Bluetooth 5.0. U1 chip based on the ARM Cortex architecture, built on the 16nm FinFet Process. The U1 (ultrawideband chip) allows for a precise location tracking. The S6 module includes 1GB of LPDDR4X RAM and 32GB (SK Hynix) of onboard memory. The S6 SIP module, DRAM and memory add up to 23.7% of the overall cost.

The sensors can potentially be deployed to detect seizures and tremors, and help people with conditions like irregular heartbeat, epilepsy and low blood oxygen saturation levels, which are associated with conditions like asthma, sleep apnea and COVID-19. Apple Watch can even predict diabetes and hypertension. The vast array of sensors includes an accelerometer with fall detection, third-generation optical heart rate sensor, blood oxygen sensor, gyroscope, altimeter and an ambient light sensor. These sensors together make up around 12% of the total BoM cost.

The speaker gets an improvement as well, with Apple claiming it to be 50% louder. The Digital Crown, which is an integral part of Apple Watch, provides haptic feedback with the help of Taptic engine. This engine takes up around 35% of the space inside Apple Watch. The latest Taptic engine is more robust compared to the former. With the battery size amounting to 303.8 mAh, it is a minor increase of about 7.8mAh from the previous Series 5. Apple also provides fast charging in the Series 6. Battery and the wireless charging coil in the smartwatch amount to about 6% of the total BoM cost.

The casing and body materials remain the same, including the body crown, metal frame, rear cover made of aluminum/stainless steel, ceramic/sapphire crystal back, and stainless-steel frame. Together these make up around 13.3% of the BoM cost.

The core functionality of Series 6 remains the same as that of Series 5 after the addition of the always-on altimeter and blood oxygen sensor, brighter display, minor upgrade to the battery, and fast charging capability.

It is worth pointing out that the miniaturization of Apple Watch components and their tight integration is driving the price further up. With September just a few months away, Apple may bring a redesigned body and a plethora of upgrades to its hardware, software and sensors.