Home Archives Contact Us Subscribe Twitter Facebook Patently Mobile
The Apple TV+ Drama Series 'Truth be Told' Returns with Season 2 in late August with Kate Hudson as a major Cast addition
With EU Lawmakers clearly out to Damage U.S. Tech firms, Apple's CEO got a chance to talk about the dangers of the proposed DMA 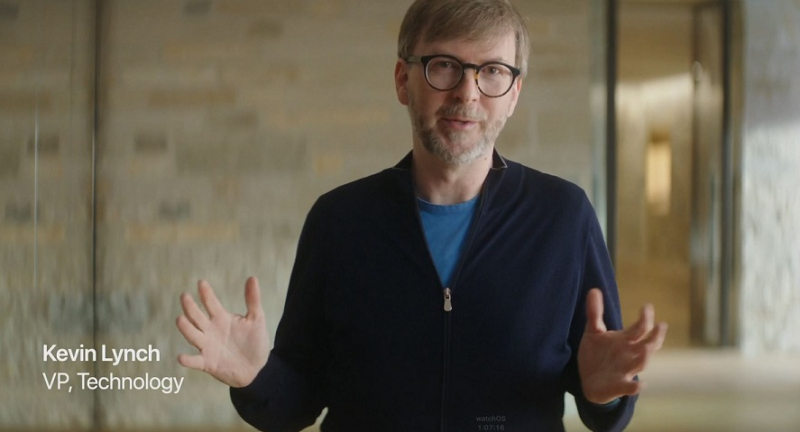 Patently Apple has covered health related sensors coming to AirPods in Apple patents in a series of patent applications in 2020 and 2021 (01, 02 & 03). Technically, an Apple patent that we covered way back in 2009 mentioned adding biometric sensors for the heart, temperature and more. We also noted in a trademark report covering an update to AirPods in2018 that Apple had purposely added "Wellness Sensors" to their classification details. So Apple working to bring wellness sensors to future AirPods isn't something new and didn't require rumors to confirm it.

In a new TechCrunch interview with Apple's VP Kevin Lynch who's in charge of Apple Watch he states that he's seen Apple Watch grow considerably since 2014. He explained how it became what it is today and provided some hints as to where it might go in the future.

"It’s been amazing how much it’s evolved over time," Lynch said, referring to the original Health app. "It actually started from Apple Watch, where we were capturing heart rate data for calorimetry activity, and [Activity] ring closure, and we needed a place to put the heart rate data. So we created the Health app as a place to store the data."

From there, Lynch says Apple realized that once they had this centralized location, they could develop a system that could store other data types, as well, and create an API and architecture that allowed developers to store related data there, as well, in a privacy-respecting way.

In the early days, the Health app was still essentially a passive storehouse, providing users one touchpoint for various health-related information, but the company soon began thinking more about what else it could offer, and inspiration came from users.

A key turning point for Apple’s approach to health came when the company saw that users were doing more with features available via the Apple Watch than the company ever intended, Lynch said.

“We were showing people their heart rate, and you could look at it — we were using it for calorimetry,” he told me. “But some users actually were looking at their heart rate when they weren’t working out, and noticed it was high.

From there, Apple then developed its high heart rate alert notifications, which can tell users when Apple Watch detects an unusually high heart rate that occurs when they aren’t moving around very much.

Later Lynch noted that "Our work on health very much involves this ongoing discussion of, from a clinical perspective, what is really interesting to know about somebody? Then from a science perspective, what do we think that we can sense about somebody? It’s this intersection of what might we be able to know and extract from the data that we gather, or are their new sensors that we might be able to build to get some data that could answer the questions that, clinically, we think would be really valid."

TechCrunch's Darrell Etherington ended his interview by asking Lynch about what kind of possibilities might open up when you consider that AirPods, too, contain their own sensors and gather different data that could complement that monitored by the iPhone and Apple Watch in terms of health.

Lynch replied that "We already do sensor fusion across some devices today, and I think there’s all kinds of potential here." Yes, of course, and Apple's patents have provided us with some detail as to what they're possibly developing on this front.

If you're interested in the topic of health sensors, then be sure to read the full TechCrunch article here.