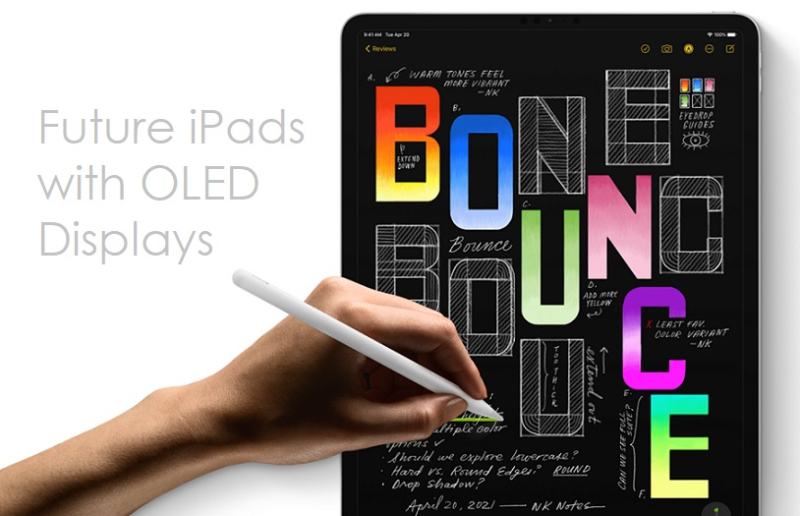 On Monday we reported that Mark Gurman posted his first tech newsletter called "Power On" talking about a wide range of topics including a longshot possibility that Apple is working on iPads with much larger displays for sometime in the future." Beyond that vague rumor on iPads, we're learning today that starting in 2022, iPads will provide OLED panels.

In December 2020 Patently Apple posted a supply chain report titled "Apple is Preparing to introduce iPads with new Ultra-Thin Hybrid-OLED Displays starting in 2022 and then full scale in 2023." So today's rumor report from Korean tech site The Elec isn't exactly new, but it does act as a second source that the iPad will be switching to OLED displays while adding an interesting possible twist.

Today The Elec reports that "Cupertino will launch its first ever OLED iPad in 2022. The tablet will sport a 10.86-inch OLED screen. Samsung Display will be the sole supplier of the OLED panels. In the following year, in 2023, Apple is planning to launch an 11-inch OLED iPad and a 12.9-inch OLED iPad.

There is a strong chance that the company will apply different OLED structures for the iPad launching next year and its successors in 2023.

Next year’s iPad will also use low-temperature polycrystalline silicon (LTPS) thin-film transistor (TFT) and red, green and blue emission layers. This is the same as the OLED structure Apple uses for its iPhones.

For the iPads launching in 2023, Cupertino could use flexible OLED over rigid OLED. The Elec then goes out on a limb by predicting that Apple could also change the TFT from LTPS to low-temperature polycrystalline oxide (LTPO).

LTPO TFT offers 120Hz refresh rate. Apple is planning to apply the technology first on its upper tier models for its upcoming iPhone series launching later this year." While the leap to Apple adopting LTPO TFT for 2023 sounds reasonable, it may be the opinion of The Elec's writer and not source based. Of course such a leap would be applauded by all iPad fans should that pan out. For more, read The Elec report.