On Monday we had learned that Apple hired the author of the book "Chaos Monkeys" which was a NY Times Bestseller. He had been with Apple for over two months and his professional title at Apple was noted as "Product Engineering, Ads Platform." On Wednesday we posted a report titled "In a rare move, Apple Employees circulate a Petition demanding an investigation into the company's 'misogynistic' new hire." On Thursday, we posted a report title "Apple Backtracks and Sends their recent Ad Engineer Hire Mr. Martinez Packing after receiving an angry Employee Petition." We ended the report noting: "Whether we'll hear from Mr. Martinez on this matter in the future is unknown at this time." 24 hours later, Mr. Martinez took to Twitter.

Late yesterday Mr. Martinez took to Twitter to clarify his position on the matter that occurred at Apple. Below is an initial tweet that you could visit.

I have thus far maintained my silence on the Apple situation as I've sought to settle things amicably with the company that I admired, and at which I hoped to build the future of ads privacy.

As they however are not maintaining their silence on the matter, neither will I.

Below is a string of Tweets from Martinez in the form of a graphic. 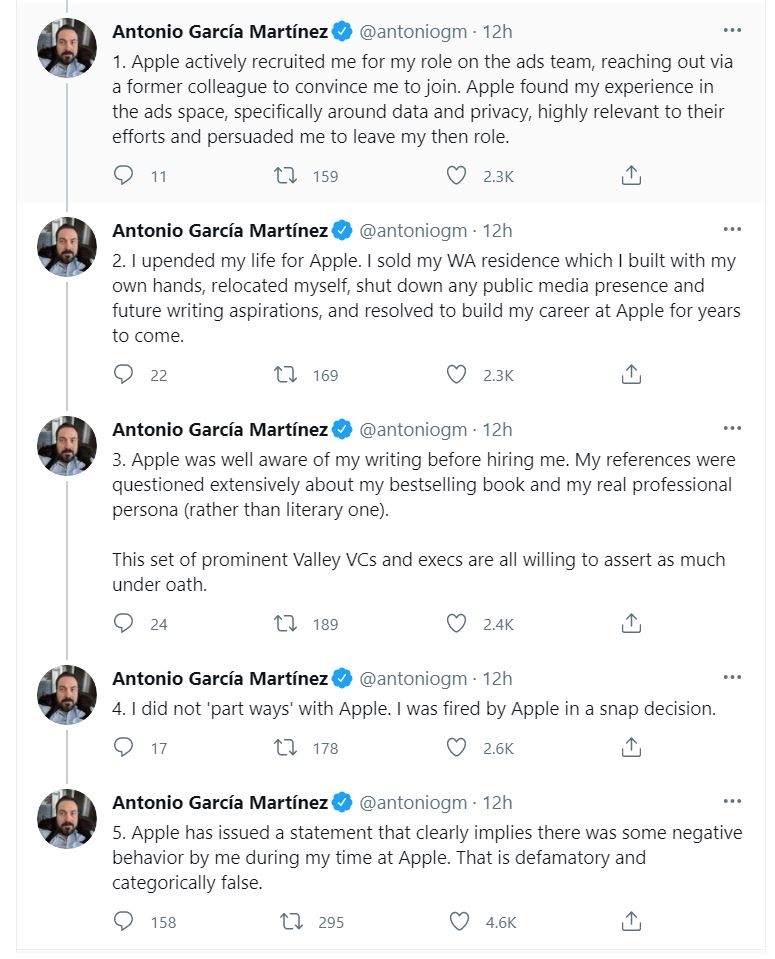 It sounds as though Mr. Martinez is thinking of a wrongful dismissal lawsuit and who could blame him. The rebuke of Mr. Martinez was purposely leaked to The Verge by an Apple employee likely linked to the petition so as to pressure Apple management to act. It worked, but there's likely a price to be paid for such actions of firing someone so publicly after seeking him out for employment.

Below is an excerpt from the original petition sent to Eddy Cue and team this week:

"We are deeply concerned about the recent hiring of Antonio Garcia Martinez. His misogynistic statements in his autobiography – such as "Most women in the Bay Area are soft and weak, cosseted and naïve despite their claims of worldliness, and generally full of shit" – directly oppose Apple's commitment to Inclusion and Diversity. We are profoundly distraught by what his hire means for Apple's commitment to its inclusion goals, as well as its real and immediate impact on this working near Mr. Garcia Martinez. It calls into question parts of our system of inclusion at Apple, including hiring panels, background checks, and our process to ensure our existing culture of inclusion is strong enough to withstand individuals who don't share our inclusive values.

It's concerning that the views of Mr. Garcia Martinez expresses in his 2016 book Chaos Monkeys were overlooked – or worse, excused – during his background check or hiring panel. We demand an investigation into how his published views on women and people of color were dismissed or ignored, along with a clear plan of action to prevent this from happening again." [Emphasis theirs]

It's unlikely that Apple could win in a wrongful dismissal case knowing the deep and extensive process that Apple executes to through to hire someone.

One of the questions remaining is, whose head will roll for this mishap, failure and embarrassment to the company?

To learn more on this, listen to the interesting Recode Media podcast with Peter Kafka titled "Antonio García Martínez's controversial exit from Apple" here (or here).