Home Archives Contact Us Subscribe Twitter MeWe Facebook Patently Mobile
Closing out the week, Apple releases the trailer for Season 2 of "Home Before Dark" that premieres on Apple TV+ June 11
Apple's Chief Compliance Officer has written to the U.S. Senate Judiciary Committee, refuting Allegations by Spotify & others in Detail 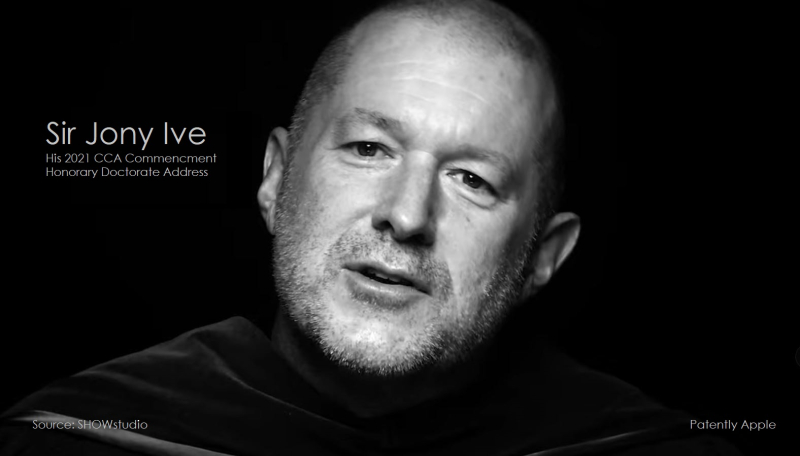 Earlier this week, SHOWstudio recorded a motivational and thought-provoking speech from Apple's former Industrial Designer Sir Jony Ive, who reflected on the significance of art and design in contemporary culture, as part of California College of the Arts’s virtual commencement for the graduating class of 2021. The video was only made available today.

Addressing the graduating class of 2021 at California College of the Arts in a speech, designer, founder of creative collective LoveFrom and formerly chief design officer of Apple Sir Jony Ive delivered a 15-minute speech as part of the university's 114th commencement, celebrating the scholarly achievement of the Class of 2021. The speech was directed towards a total of 34 programs, 23 undergraduate and 11 graduate, across four key disciplines at the CCA - art, design, architecture and writing - but it also applies more broadly to all 2021 graduates across the world, encouraging them to believe in themselves and their art.

There were many interesting moments during Ive's speech that were memorable. Very much like when Ive described a new Apple product or feature. His careful, quite form of articulating an idea is one of his trademarks. Below is one train of thought out of many that Ive's delivered, along with one memorable quotes that I found most interesting:

One Train of Thought: "Ideas by definition are always fragile. If they were resolved they wouldn't be ideas. They would be products that were ready to ship. I've come to lean that you have to make an extraordinary effort not to focus on the problems which are implicated with any new idea. These problems are known, they're quantifiable and understood. But you have to focus on the actual idea which is partial, tentative and unproven. If you don't actively suspend your disbelief; if you don't believe there is a solution to the problems, of course you'll lose faith in your idea. That is why criticism and focusing on the problems can be so damaging – particularly in the absence of a constructive idea. Remember, opinions are not ideas. Opinions are not as important as ideas. Opinions are just opinions. "

An Interesting Quote: "Being curious fuels our appetite to learn, and wanting to learn is far more important than being right."

For more on this, read the full SHOWstudio report here.