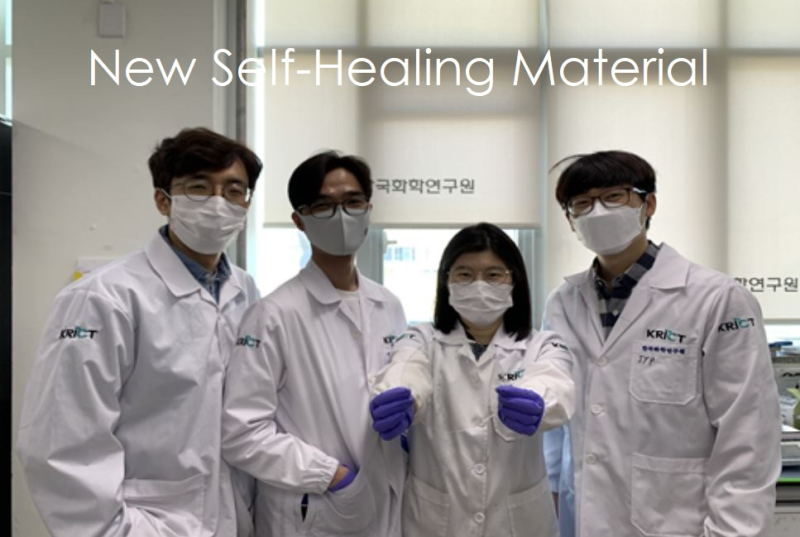 Yesterday Patently Apple posted a report titled "A Promising Breakthrough in LiDAR Sensors in Korea could be a huge benefit to Apple's Project Titan and Autonomous Vehicles in General." Today, another breakthrough was revealed in the Korean press.

According to the Korean Business report, the Korea Research Institute of Chemical Technology and Pukyong National University announced yesterday that their joint research team developed a self-healing material second to none in the world in terms of mechanical strength and the polymer material is capable of healing itself from cutting at room temperature.

According to the research team, the material is very hard and tough and yet highly self-healable unlike existing self-healing polymer materials, which have been developed for a longer use of clothes, shoes, tires, foldable displays and so on and yet still need to be improved in terms of tensile strength in that the materials are very soft and their intermolecular bonding is loose to ensure self-healing properties.

This breakthrough could be of great interest to smartphone makers like Apple that may enter foldable display/foldable smartphone or tablet market in the coming years.

The team explained that "In the material we developed, the degree of molecular bonding increases instantaneously in the event of external friction or shock, and then recovery occurs with a return to a state of free molecular movement."

The team added that "The tensile strength of the material is at least 43 MPa, which is close to that of a polyurethane shoe sole, whereas the previous high is 30 MPa."

“In addition, the degree of hardening of the material varies with the degree of external pressure,” the team went on to say, continuing, “The material adjusts its shock absorption and recovers itself while switching between solid and jelly states depending on the pressure."