In a rare move, Apple Employees circulate a Petition demanding an investigation into the company's 'misogynistic' new hire

On Monday Patently Apple posted a report titled "Apple has hired the Ad Executive who wrote "Chaos Monkeys," a one-time NY Times Bestseller." Today, the news has surfaced that Apple employees have circulated a petition demanding an investigation into the company's 'misogynistic' new hire.

A group of Apple employees has written a petition asking for an investigation into the hiring of Antonio García Martínez — a former Facebook product manager and author of the book Chaos Monkeys.

In the petition, the employees expressed concern about García Martínez’s views on women and people of color. His hiring “calls into question parts of our system of inclusion at Apple, including hiring panels, background checks, and our process to ensure our existing culture of inclusion is strong enough to withstand individuals who don’t share our inclusive values,” they write.

García Martínez, who has also written for Wired, was the product manager for Facebook’s ad targeting team from 2011 to 2013. Most of the things the Apple employees have expressed concern about come from Chaos Monkeys itself. (The book is dedicated to “all my enemies.”) The autobiography traces García Martínez going from Wall Street to Silicon Valley. García Martínez has described the book as "total Hunter S. Thompson/Gonzo mode." The employees, in the petition, view it differently: they say it’s racist and sexist.

One screenshot from the book that has been circulating on Twitter calls women in the Bay area "soft and weak, cosseted and naive despite their claims of worldliness, and generally  full of shit."

“It’s so exhausting being a woman in tech; sitting opposite men who think because of my gender, I am soft and weak and generally full of shit,” wrote an Apple employee on Twitter, drawing attention to the quote. "It’s not even worth it to say I have worked relentlessly for every accomplishment I have."

Below is an excerpt from the text of the petition/letter obtained by The Verge, which began circulating today (emphasis theirs): 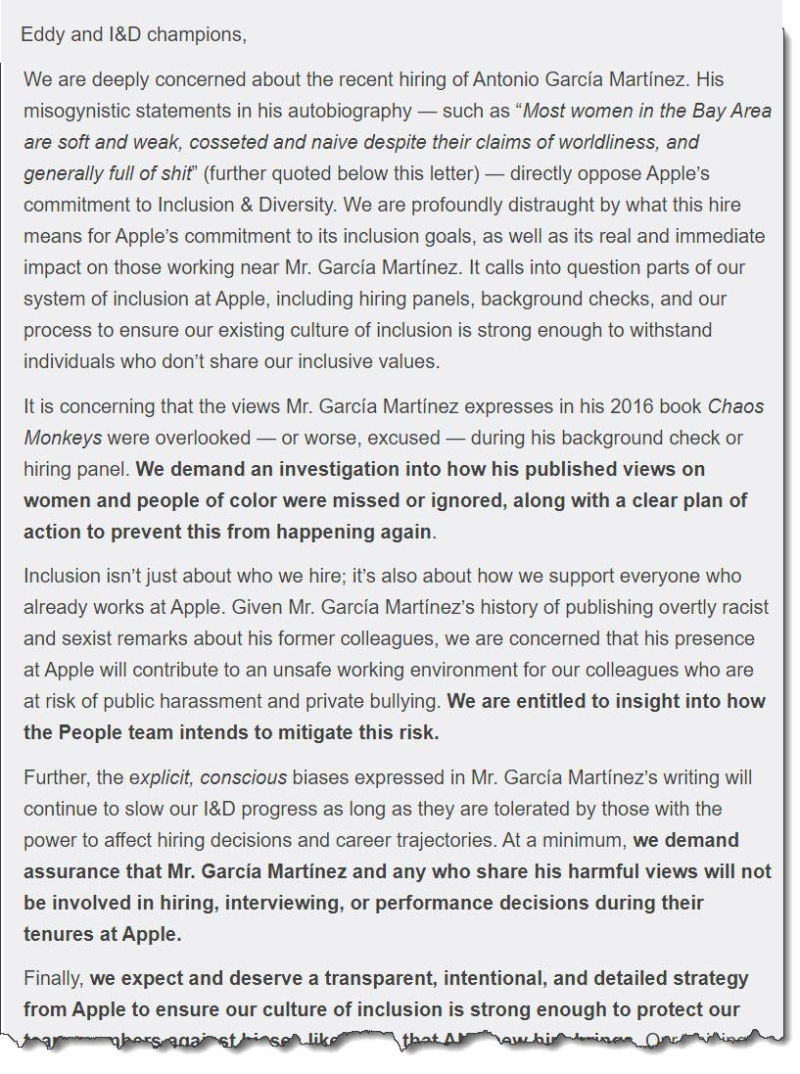 For more, read the full report by The Verge.