Home Archives Contact Us Subscribe Twitter MeWe Facebook Patently Mobile
Apple and Epic Games have Filed "Findings of Fact & Conclusion of Law" Documents with the Court Prior to the May 3, 2021 Trial
Prior to the official release of 'AirPods 3,' Counterfeit products begin to hit the market overseas

In January, iPhones captured 6 out of the top 10 smartphone models shipped, with the iPhone 12 dominating the top 3 Spots It's being report today that Apple grabbed six places in the global top 10 best-selling smartphone models’ list for January 2021. The Apple iPhone 12 led the list followed by the iPhone 12 Pro and iPhone 12 Pro Max. These three iPhone 12 models contributed to 71% of Apple’s total sales for the month.

There was a pent-up demand for 5G upgrades within the iOS base which, along with strong carrier promotions, resulted in robust sales for the iPhone 12 series. Besides, Apple launched the new iPhone series later than the usual date, resulting in strong demand for these models spilling over into January. 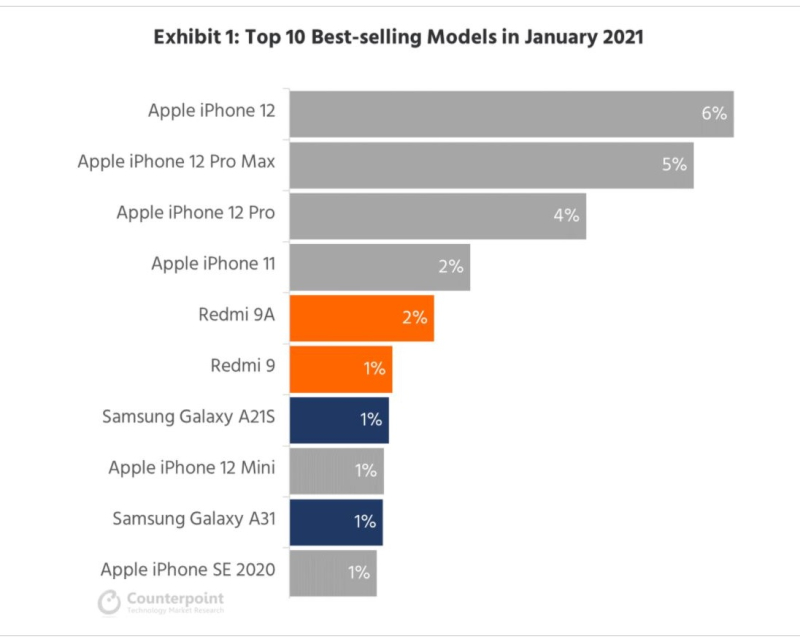 Close to one-third of Apple’s sales for the iPhone 12 series came from the US. This was due to strong carrier promotions and 5G demand. The iPhone 12 Pro Max was the top-selling model in the US, as consumers preferred the high-end version. Old models iPhone SE 2020 and iPhone 11 also continued to do well.

With the 5G network rollouts picking pace, OEMs are launching more 5G devices across various price segments. Even though 5G networks are not yet operational in many regions, OEMs are still launching 5G devices there with many customers preferring a 5G phone to avoid any disruption in their replacement cycle later. 5G is slowly becoming a standard offering and as prices continue to come down, we will see more mid-tier 5G capable smartphones in the bestseller list in the coming months. For more on this, read the full Counterpoint report.