Home Archives Contact Us Subscribe Twitter MeWe Facebook Patently Mobile
After the U.S. Senate's negative hearing on App Store issues, the EU Commission is preparing to issue charges against Apple over its App Store
Apple has won their second Face ID Patent this month and this time it covers its Hybrid Mode of Illumination System

Today the U.S. Patent and Trademark Office officially granted Apple a patent that relates to Project Titan and more specifically to systems and methods for determining a friction parameter, such as a maximum available traction force or a friction coefficient of a tire/surface interface, to control operation of a vehicle.

Apple's patent background notes that a tire generates a traction force through compression and expansion of the tire body and via its interaction with an underlying surface (e.g., road). During acceleration, deceleration, and turning of a vehicle, the tire will slide with respect to the surface in addition to rolling, and this sliding is referred to as wheel slip. The amount of longitudinal sliding may be expressed as a slip ratio, which is the relative difference between the tire's rotational velocity and the achieved translational velocity. The amount of lateral sliding may be expressed as a slip angle, which is an angular difference between the direction that the tire is pointing and the direction that the vehicle is moving. The traction force generated by the tire is a non-linear function of the slip ratio and the slip angle.

Apple's patent FIG. 3A is a schematic that illustrates and example of a downward force being distributed from a first tire to the other tires of the vehicle; FIGS. 7A-7D are illustrations that show examples in which a yaw moment caused by a reduced downward force applied to one of the tires of the vehicle is opposed by counter-steering; FIG. 5 is a schematic illustrating example of the various measurements, velocities, and forces that may be sampled to determine a slip ratio and a maximum available traction force. 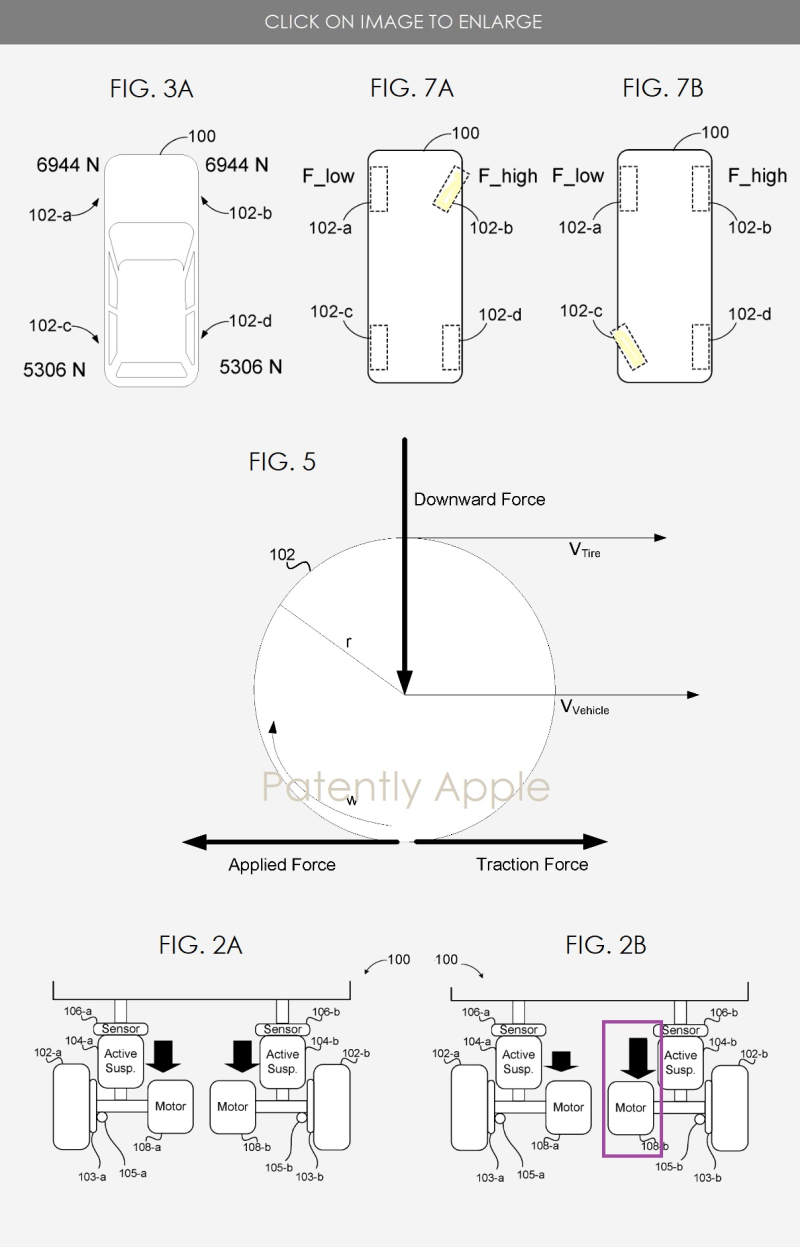 Apple's patent FIGS. 2A and 2B above are schematics that illustrate an example of a downward force being reduced from a first tire and being distributed to a second tire.