The U.S. Patent and Trademark Office officially published a series of 78 newly granted patents for Apple Inc. today. In this particular report we cover a granted patent relating to Project Titan, and specifically for an extendable bumper system for vehicles.

Apple notes that moving a bumper from a retracted position to an extended position changes the location of initial contact during a collision relative to other parts of the vehicle, such as external body panels and internal structure members.

Apple's patent FIG. 8 shows impact of an object (#440) with the extendable bumper system. Because of the different inflation pressures in the internal chambers (#434, #436 and #438), they deform differently in response to the impact. 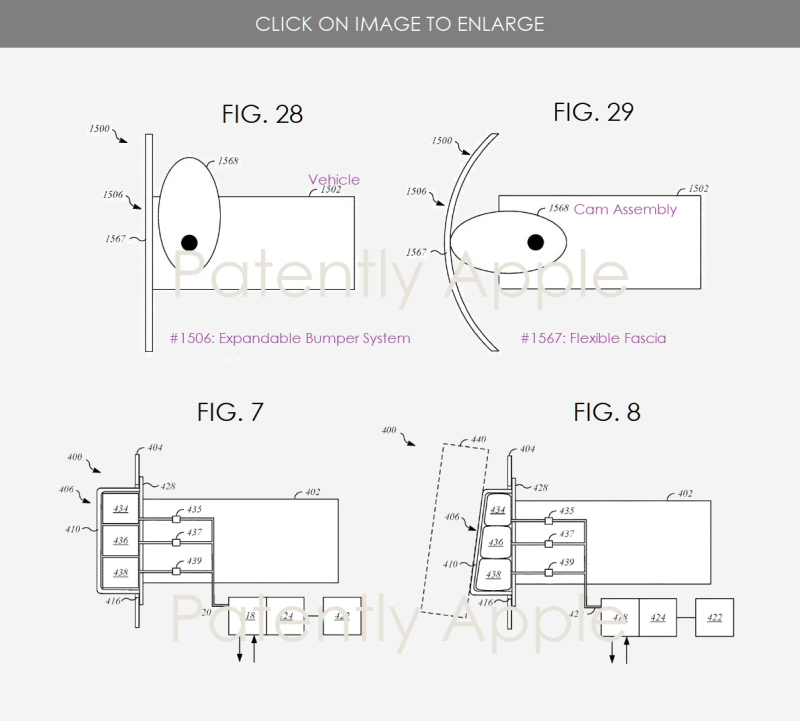 Apple's granted patent 10,974,688 was originally filed in Q3 2019 and published today by the US Patent and Trademark Office.

In related news today, The Korea Times is reporting that LG and Magna are close to signing a deal with Apple for manufacturing an electric vehicle.  Late last month, Patently Apple posted a report titled "Magna's CEO made a simple comment about willing to work with Apple on an Electric Car and the stock market reacted immediately." The stock market and media in general are very interested in a possible Apple branded vehicle. Whether today's rumor has any validity is unknown at this time.