Home Archives Contact Us Subscribe Twitter MeWe Facebook Patently Mobile
Analysts are predicting that iPhone Revenue will show an increase of 40% or more when Apple reports their Fiscal Q2 Financials on Wednesday
Apple announces plans to invest more than $430 billion over the next five Years, creating 20,000+ new Jobs in the U.S. 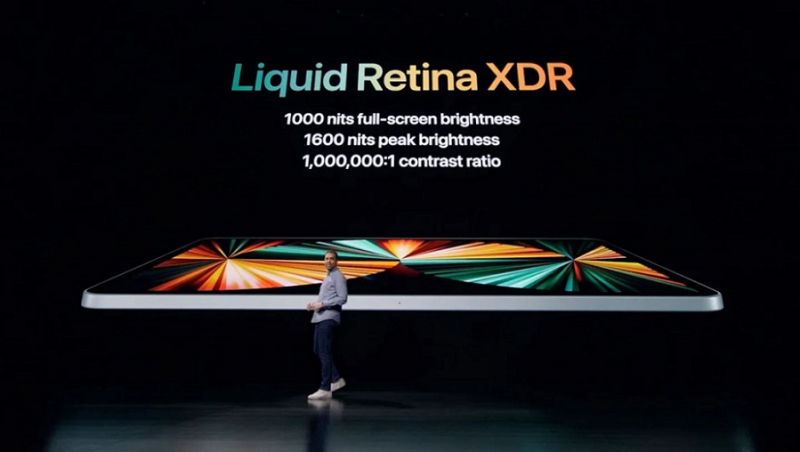 Talking about the new iPad with the M1 processor and stunning Liquid Retina XDR display was the core theme of the interview. Greg Joswiak first noted that "One of the things that iPad Pro has done, as John [Ternus] has pointed out, is push the envelope. And by pushing the envelope, it's created this space for developers to come in and fill it. When we created the very first iPad Pro, there was no Photoshop. There was no creative apps that could immediately use it. But now there’s so many you can’t count."

Joswiak added "how crazy is that, to take a chip in a desktop and drop it into an iPad. I mean it’s just incredible to have that kind of performance at such amazing power efficiency. And then have all the technologies that come with it. To have the neural engine and ISP and Thunderbolt and all these amazing things that come with it, it’s just miles beyond what anybody else is doing."

TechCrunch writer Matthew Panzarino notes in his interview that one of the marquee features of the new iPad Pro is its 12MP ultra-wide camera with Center Stage. An auto-centering and cropping video feature designed to make FaceTime calling more human-centric, literally. It finds humans in the frame and centers their faces, keeping them in the frame even if they move, standing and stretching or leaning to the side. It also includes additional people in the frame automatically if they enter the range of the new ultra-wide 12MP front-facing camera. And yes, it also works with other apps like Zoom and Webex and there will be an API for it.

Ternus chimed in stating that "This is one of the examples of some of our favorite stuff to do because of the way it marries the hardware and software right. So, sure it’s the camera but it’s also the SOC and and the algorithms associated with detecting the person and panning and zooming. There’s the kind of the taste aspect, right? Which is; how do we make something that feels good. doesn’t move too fast, and doesn’t move too slow. That’s a lot of talented, creative people coming together and trying to find the thing that makes it Apple-like.”

With the ongoing chatter about how the iPad Pro and Mac are converging from a feature-set perspective, Panzarino asked how they would characterize an iPad Pro vs. a MacBook buyer? Joswiak is quick to respond to this one.

"This is my favorite question because you know, you have one camp of people who believe that the iPad and the Mac are at war with one another right it’s one or the other to the death. And then you have others who are like, no, they’re bringing them together — they’re forcing them into one single platform and there’s a grand conspiracy here," he says.

"They are at opposite ends of a thought spectrum and the reality is that neither is correct. We pride ourselves in the fact that we work really hard to have the best products in the respective categories. The Mac is the best personal computer, it just is. Customer satisfaction would indicate that is the case, by a longshot."

If you follow along, Panzarino notes that "you’ll know that Apple studiously refuses to enter into the iPad vs. Mac debate — and in fact likes to place the iPad in a special place in the market that exists unchallenged." You could read the full interview at TechCrunch here.

Apple refuses to entertain having a single merged OS experience on a tablet like Windows now offers, even if their customer base would like to have that option. Keep in mind that Apple isn't always right. For years, marketing VP Phil Schiller was convinced that the whole phablet trend developed by Samsung for smartphones was absolutely the wrong direction for smartphones and mocked it passionately – and yet Apple eventually caved and introduced a phablet (iPhone 6) that became a mass hit. Schiller was also convinced that the MacBook's Touch Bar was superior to a full touch display, and fans didn't buy into Apple's marketing position at all. Customers kept saying, why can't we have a full touch screen?

Whether Apple will ever move from their position is unknown at this time, but fans are stubborn on this point. They want a merged experience of macOS and iPadOS on devices like iPad and iMac. Below are just a couple of the comments that are found at the bottom of the TechCrunch report:

"Why bother putting an M1 in it if you're not going to give us MacOS to go with it. We could have taken the typical marginal speed bump that we normally expect with the AX processor line and moved on." (Gregory Pierce)

"It's crazy that they have hobbled the M1 chip with iPadOS still. Pro iPads should be macOS and iPad should be iPadOS to differentiate. I would have instantly bought if was macOS, but it's a giant meh knowing M1 is being held back." (Ben Mullinger)

Windows customers love the merged experience that includes touch and pen input and many Apple fans would love to have the same experience with a merged Apple OS. Yet, it's hard for Apple to want to provide customers with what they want at this time because they fear a fall in sales. Of course Apple executives will vehemently deny this, but customers, like those who wanted an iPhone phablet, eventually forced Apple's hand.

Customers will continue to complain that they want a merged OS experience in the hopes that Apple will one day actually listen to them and give them what they want.  Apple could always introduce a merged OS option for regular customers while keeping their Pro model pure iPadOS.  If Windows engineers figured it out, I'm sure that Apple's engineers could do this in their sleep. It's a marketing decision, not a technical one.

Update 10:05 a.m. PST: Microsoft has taken advantage of this conversation and introduces a new Microsoft Surface notebook v. MacBook Air ad and right out of the bat, the number one feature that they boast having over the MacBook Air, is having a touch screen.