At present, Google's project Jacquard that started in 2015 is well ahead of others in the field of smart clothing/fabrics as noted in the original video below.

In 2018, Engadget posted a review of Google's smart jean jacket as presented below.

Over the weekend, Patently Apple discovered a new patent application from Google on smart fabrics made public by the U.S. Patent Office last Thursday. One of the features of the smart fabric jacket that the Engadget video review covered was the convenience of knowing when an Uber ride was coming and arriving.

Google's patent more specifically covers vehicle-related notifications and gestures that can facilitate ridesharing and other vehicle-related services. By way of example, an interactive textile, integrated into an interactive object such as a wearable garment for example, may be provided to facilitate ridesharing efficiencies by providing convenient context-sensitive signaling to the user regarding the status of a requested ride.

More particularly, in some examples, different notifications or notification types may be used in accordance with vehicle-related services such as ridesharing. For example, a first type of optical, tactile, audio, haptic, or other signal (such as a cuff-mounted LED lightup) can be emitted when a driver or vehicle comes within a predefined radius (or other general closeness metric) to a location.

According to some embodiments, a variety of additional systems and methods are provided. For example, actuated fabric tightening/loosening can be used as one or more of the tactile signals. In one embodiment, an arm or other portion of an interactive garment can provide a mild squeeze signal to the user's arm when the driver or vehicle arrives, in addition to (or as an alternative to) the vibrating cuff button.

In Google's patent FIGS. 7C and 7D we see that the sleeve of a smart garment provides a user at work a first and then second notification that the Uber is nearby and that they should go out to greet the vehicle;  FIG. 9 is a flowchart depicting an example process. 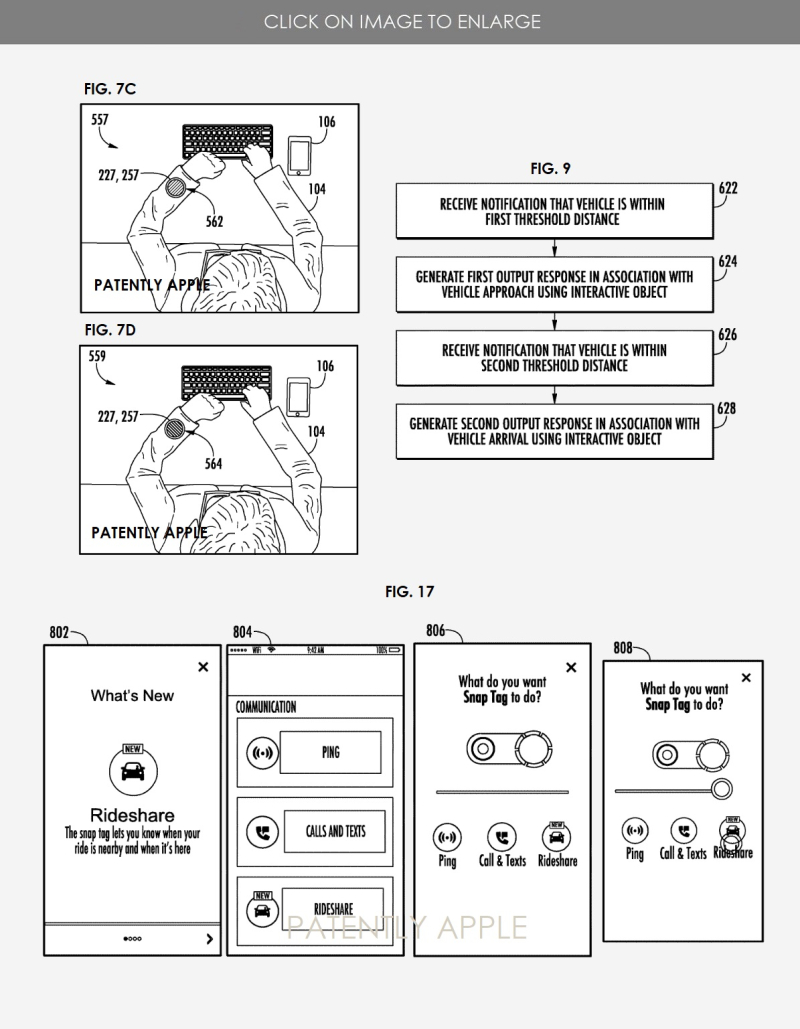 Google's patent FIG. 17 above illustrates an example of a graphical user interface.

Google's patent FIG. 11 below illustrates an example of a user interaction with a ridesharing service using an interactive object on the sleeve of the smart garment; FIG. 21 illustrates one embodiment of an interactive garment that's in the form of a dress. 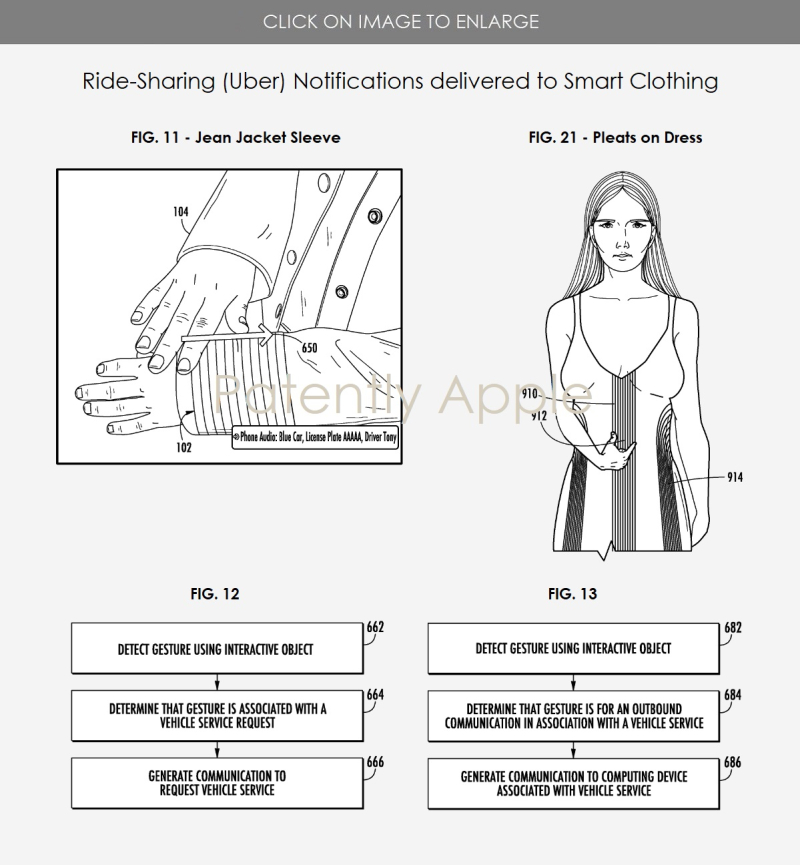 At present, the advancement of the smart fabric trend is moving glacially to market. The pace is expected to accelerate over the next five years. There's a lot of detail to Google's invention on smart fabrics related to working with ride-sharing apps like Uber and you could review these details of patent application 20210110717 here.

Throughout the year Patently Apple tries to check out what Apple's main competiton like Samsung, Google, Facebook and Microsoft are up to, patent wise, looking for possible new trends and advancements that could be coming to market.