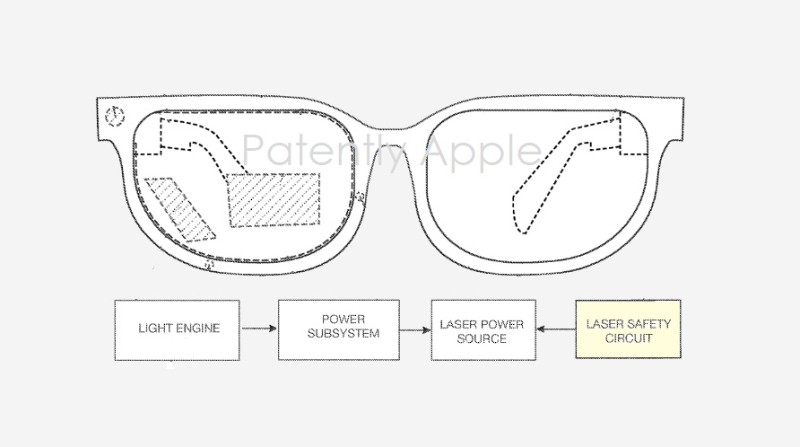 Yesterday the US Patent & Trademark Office published a patent application from Google that relates to Wearable Heads-Up Displays (WHUDs) that use laser light to form a display and to minimization of risk of laser accidents while using the WHUD.

In Google's patent background, WHUDs are wearable electronic devices that use optical combiners to combine real world and virtual images. The combiner may be integrated with one or more lenses to provide a display lens that is fitted into a support frame of a WHUD. The display lens would provide an eyebox that is viewable by a user when the WHUD is worn on the head of the user.

Some WHUDS use laser projectors to project the light that is used to form a display. Since WHUDS are worn near the eyes of the user, use of laser light to form a display raises safety concerns. In general, lasers are classified based on their potential to cause injury to human eyes and skin.

Being able to make a WHUD that looks like normal eyeglasses has been one of the most interesting and complex problems in the art. If for some reason the laser projector is outputting laser light while the temple is folded, laser light that was meant to be delivered to the combiner would not reach the combiner and would instead spill into the environment, possibly creating a laser hazard.

In-part, Google's invention provides a method of safely operating a WHUD having a field a view, a lightguide positioned within the field of view, a plurality of laser sources, a power source, and a support frame may be summarized as including testing the WHUD for optical path faults at select times during use of the WHUD. The testing may include generating a test light, directing the test light along a projection optical path, and detecting an intensity of a portion of the test light that reaches a portion of a surface of the lightguide from an optical path within the lightguide. In response to detecting an intensity of the portion of the test light that is below a threshold, reducing or shutting off a supply of electrical power from the power source to the plurality of laser sources.

Google's patent FIG. 1 below illustrates a Wearable Heads-Up Display (WHUD) #100  that may be a retinal display that projects light carrying an image to an eye of a user. The user will have a perception of seeing an image on a display screen floating in space some distance in front of the eye. However, in reality the image is on the retina of the eye and not on a display screen. 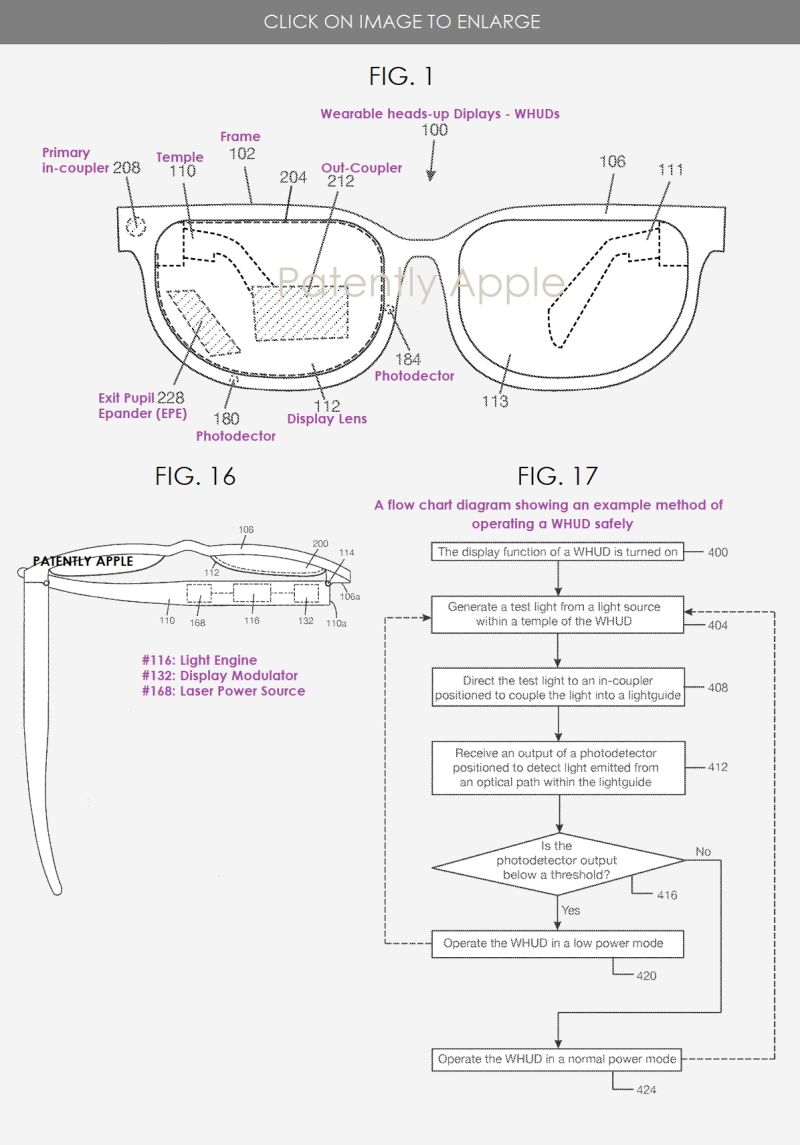 Google's patent FIG. 16 above is a top plan view of a WHUD with one of the temples in an open position and the other in a folded position. The figure points out 3 key elements of the glasses: A light engine, a display modulator and a laser power source; FIG. 17 is a flow diagram showing an example method of operating a WHUD safely.

As one could imagine, this is a highly technical patent. Engineers and tech enthusiasts could review the details of patent application 20210109353 here.