Microsoft invents a Tablet, Notebook Accessory in the form of a 'Smart Backpack' for Students and Sports Enthusiasts 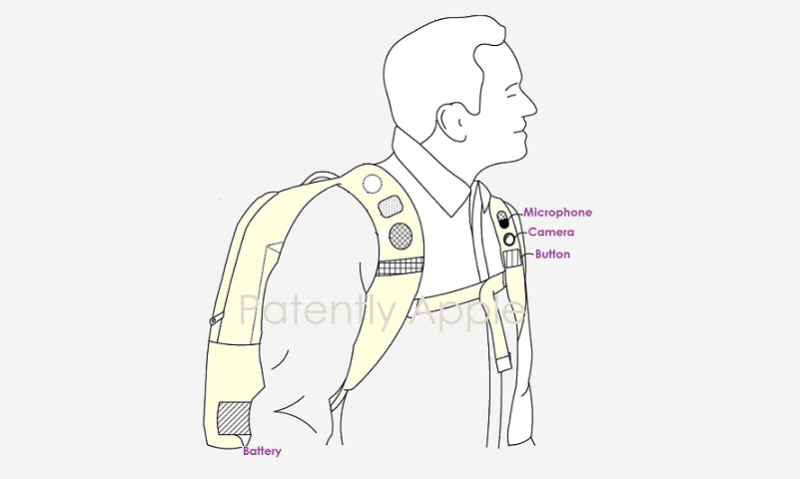 Second, many conventional digital assistants that are available on mobile devices, such as smartphones, tablets, and laptops, require the user to divert his attention and focus away from the task at hand, because the mobile devices require manual operation using the user's hands and require the user to look at the mobile device. For instance, a user may be required to stop whatever they're doing; look for and take out the device from a pocket, purse, backpack, etc.; press buttons or move switches; tap or swipe touchscreens; look at the display and changing graphical user interfaces (GUIs); and/or put the device back into the user's pocket, purse, backpack, etc.

A digital assistant consistent with the present concepts has several advantages and provides many benefits to the user. The digital assistant can be with the user wherever they go so long as they bring the wearable with them. The user can conveniently utilize the digital assistant using voice commands and need not free their hands or distract their eyes from whatever activity they are currently engaged in.

Microsoft's patent FIG. 1 illustrates a smart backpack with various components that are present on the straps of the wearable device. 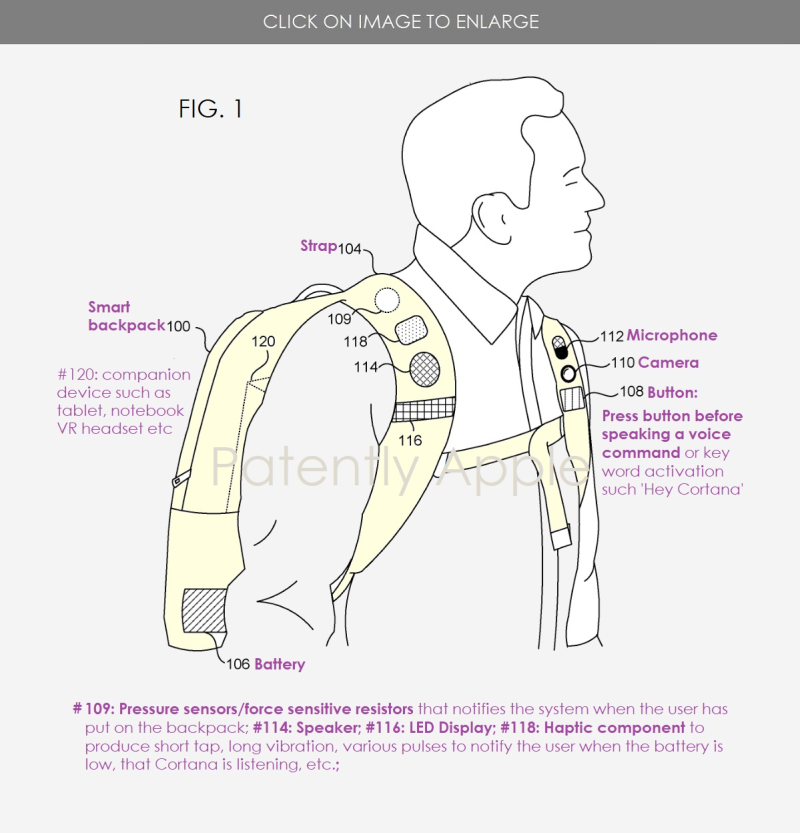 The backpack may include a camera (#110) for visually sensing the environment surrounding the user. For example, the camera may be attached to the strap of the backpack and may face the front of the user, as illustrated in FIG. 1.

In one implementation, the camera may be embedded inside the strap, such that the camera is discreetly hidden and/or less noticeable. Alternative camera configurations are possible. For instance, one or more cameras may be positioned to face the rear, sides, down, and/or up above the user. For example, the cameras may be positioned on each of the straps to capture the environment in a direction the user's body is facing.

Another camera, such as a fish eye camera may be positioned on the straps to capture the user's face (e.g., where the user is looking). Collectively, the cameras are able to provide data about the orientation of user's body and the user's head.

Microsoft's patent FIG. 2 below illustrates an overview of the smart backpack system where we see artificial intelligence engine. For example, to interpret voice commands from the user, sense the environment surrounding the user, perform tasks in response to the voice commands, and/or generate outputs to the user. 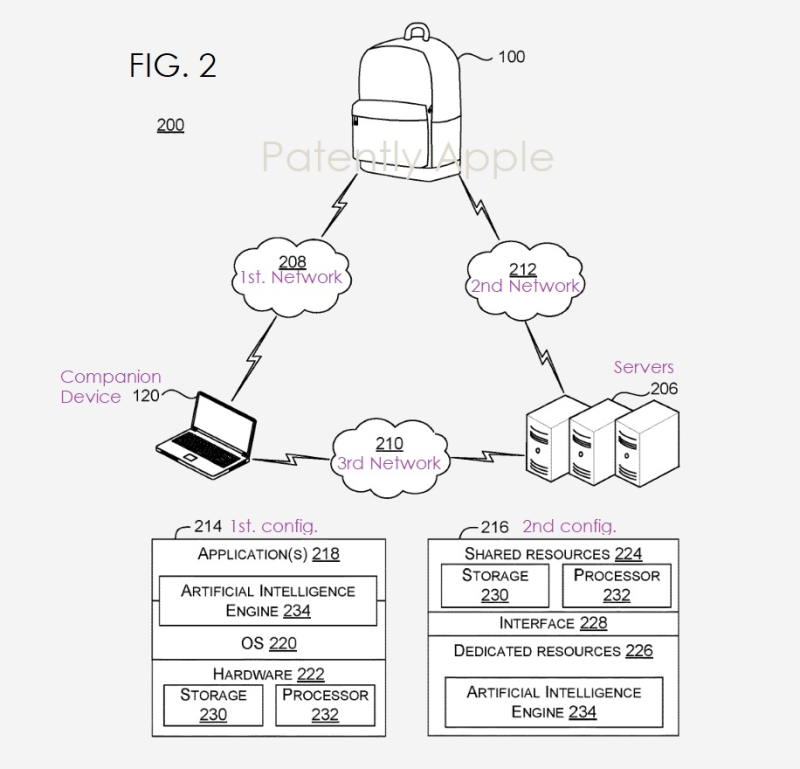 Microsoft's patent FIGS. 3A and 3B below present a skiing scenario. 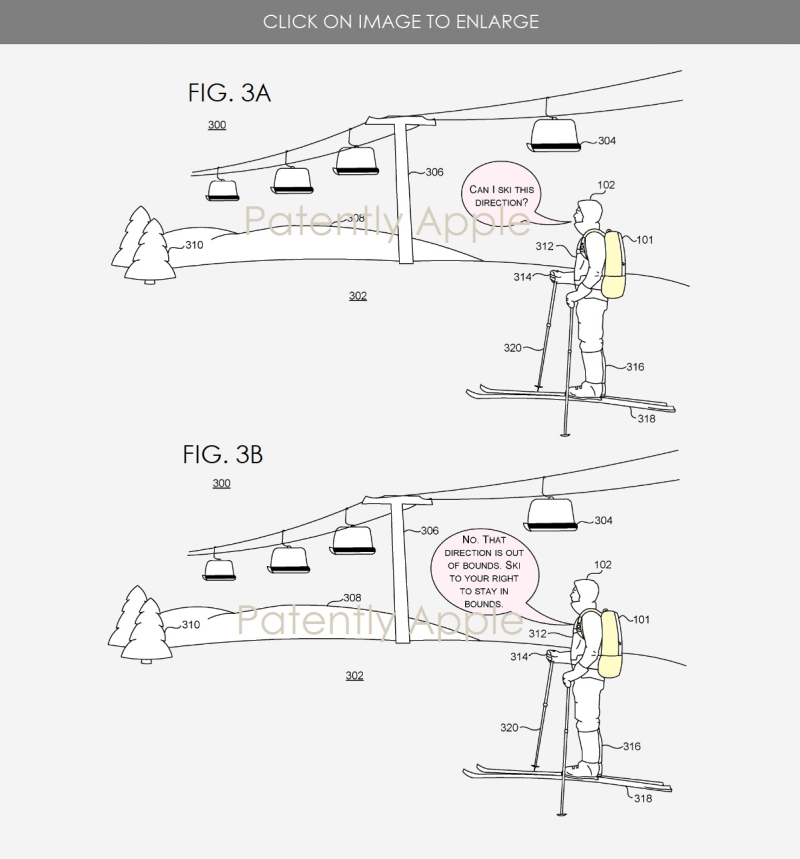 Microsoft further notes, suppose that the user is unsure which way to ski in order to stay in bounds. Conventionally, the user may need to stop skiing, release their ski poles from their hands, take off their gloves from his hands in the frigid weather, reach into their pocket or backpack to pull out their smartphone using his shaking bare hands, and manually use a map app or a conventional digital assistant to determine which way he should go to stay in bounds.

In patent FIG. 4 below is another scenario. A user views information about a concert on a poster. Instead of pulling out a smartphone from their pocket, the user can say "Hey Cortana" take a photo of this poster quickly and conveniently. The user could also ask Cortana to place the event in a calendar app or to send the photo to certain contacts/friends. 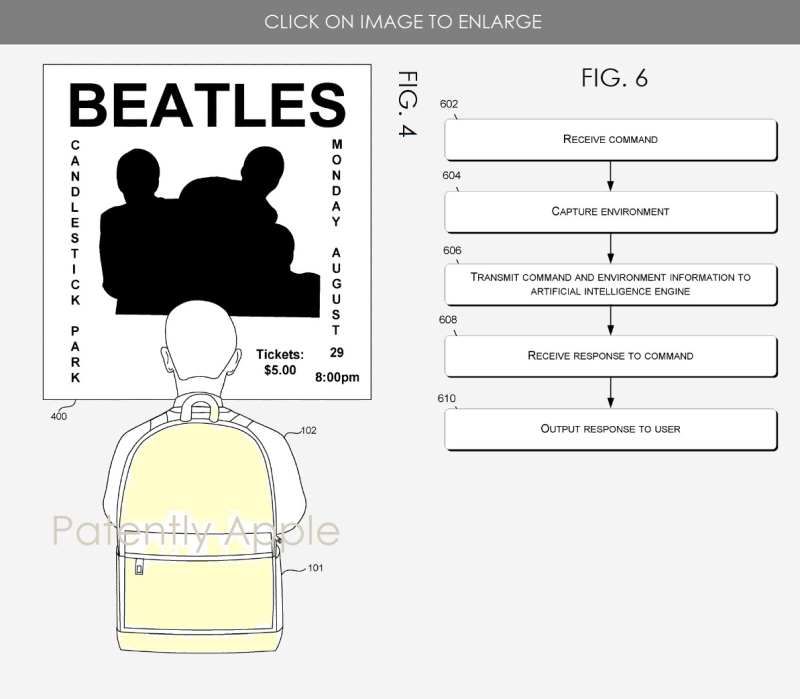 The user could also ask Cortana "Who is this band?" In response, the artificial intelligence engine may use the camera to capture an image recording of the poster, the cognitive module may understand that the user is asking information about the band named Beatles, and the digital assistant may access one or more data sources to provide information about the Beatles to the user by outputting an answer through the speaker: "The Beatles were a British rock music band popular in the 1960's. The band consisted of four men named John Lennon, Paul McCartney, George Harrison, and Ringo Starr…" In this example, the backpack may be able to provide information to the user about the surrounding environment.

The U.S. Patent Office published Microsoft's patent application on March 18, 2021 which was originally filed in September 2019.

At present, Apple has no equivalent patent on record that we're aware of. This could be something that an Apple developer could bring to market, though Apple may focus on bringing this type of functionality to future smartglasses that would end up being be a superior, lightweight solution.