Google has Filed for a Foldable Device Patent Describing a Flip Phone, a Dual Display Tablet and a Multi-Display Book-Like Device 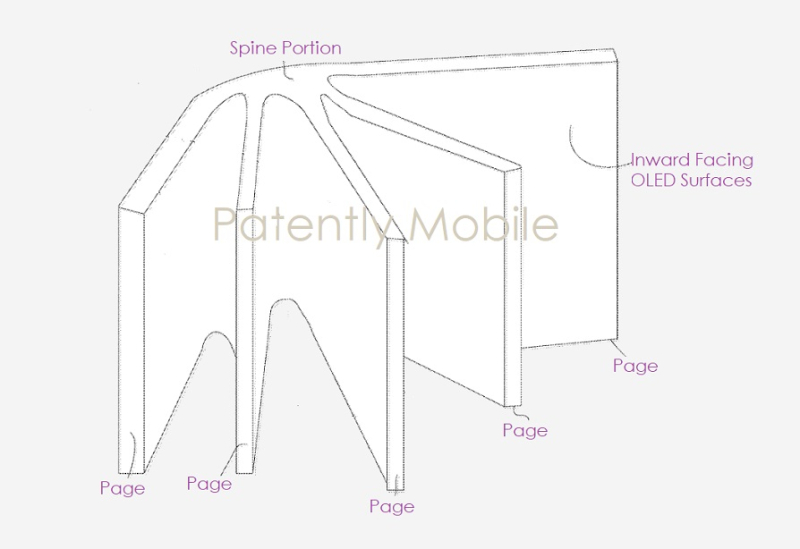 Foldable smartphones aren't that popular yet and the verdict is still out as to when the price point will entice the masses to make the leap to this form factor. Samsung is currently struggling with their Galaxy Z Fold2 and began a new promotion today that allows consumers to sign up for a free 3-day trial to test drive their latest foldable phone in the hopes of tempting fans to trade in their single display phones for their foldable.

Yet the next popular smartphone form factor is still in question. The next trend emerging this year will be smartphones with displays that could scroll out to provide a wider display. Reportedly LG and Oppo could be first to introduce this form factor in H2 2021, with Samsung aiming to deliver their first model sometime in 2022.

Then there's Microsoft's Surface Duo display smartphone that became available on February 18, 2021 with a significant drop in price to $999 for businesses.  That is a tempting price point, to be sure. Their upcoming Surface Neo, a dual display tablet, is duo out this fall. Rumors continue that HP, Lenovo and Dell could be joining this trend. This form factor uses two displays instead of one continuous display that folds and leaves a slight  indent in the middle of displays. 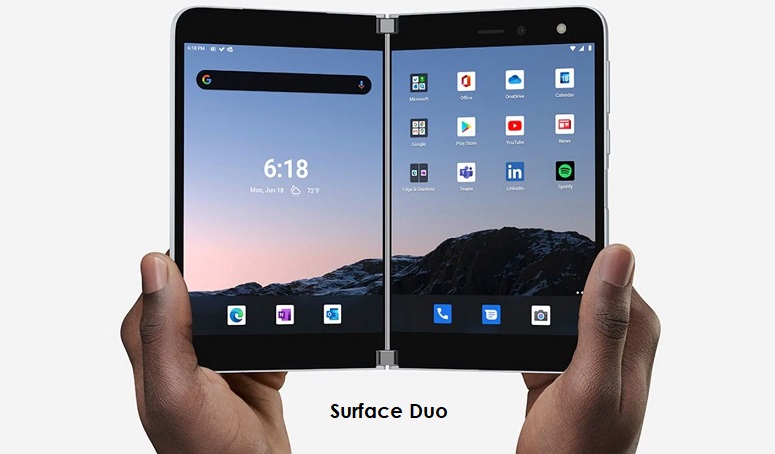 While it's still up in the air as to what new form factor could excite the market in the coming years, Google began to work on foldable devices with a non-public provisional patent back in 2017. They then took their original idea and folded into a full patent application in 2018 which finally was made public on February 4, 2021.

Google's patent covers three designs: a basic flip phone; a full sized foldable; and even a weird multi-page foldable device as presented below. 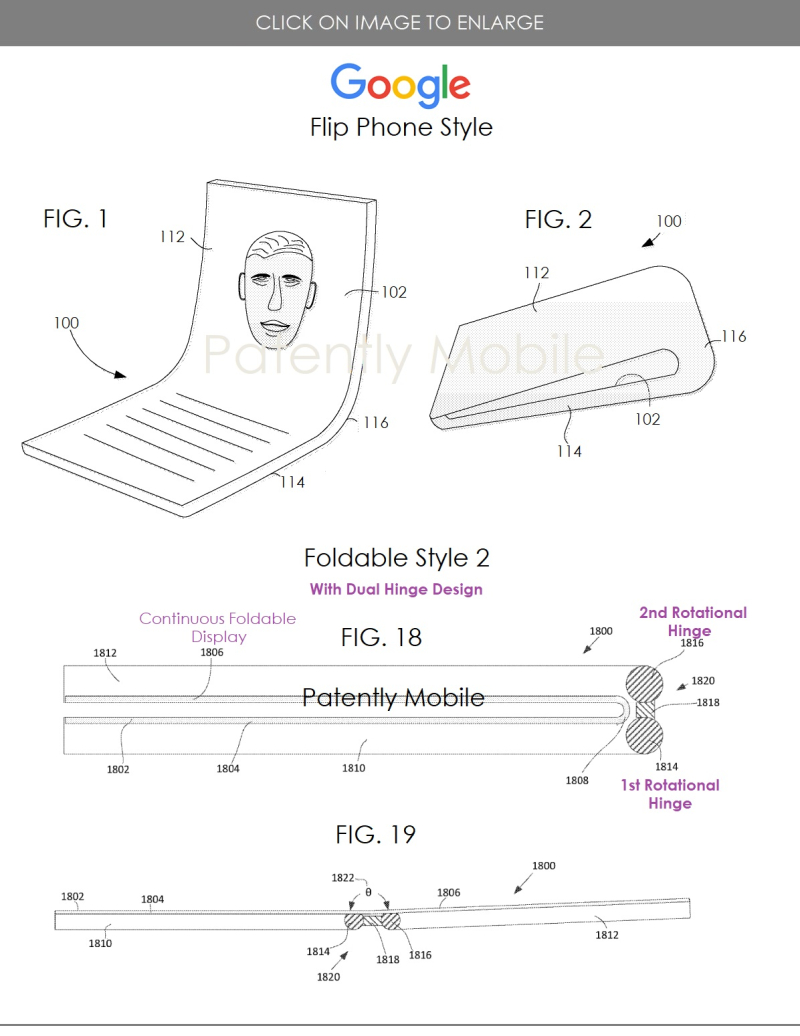 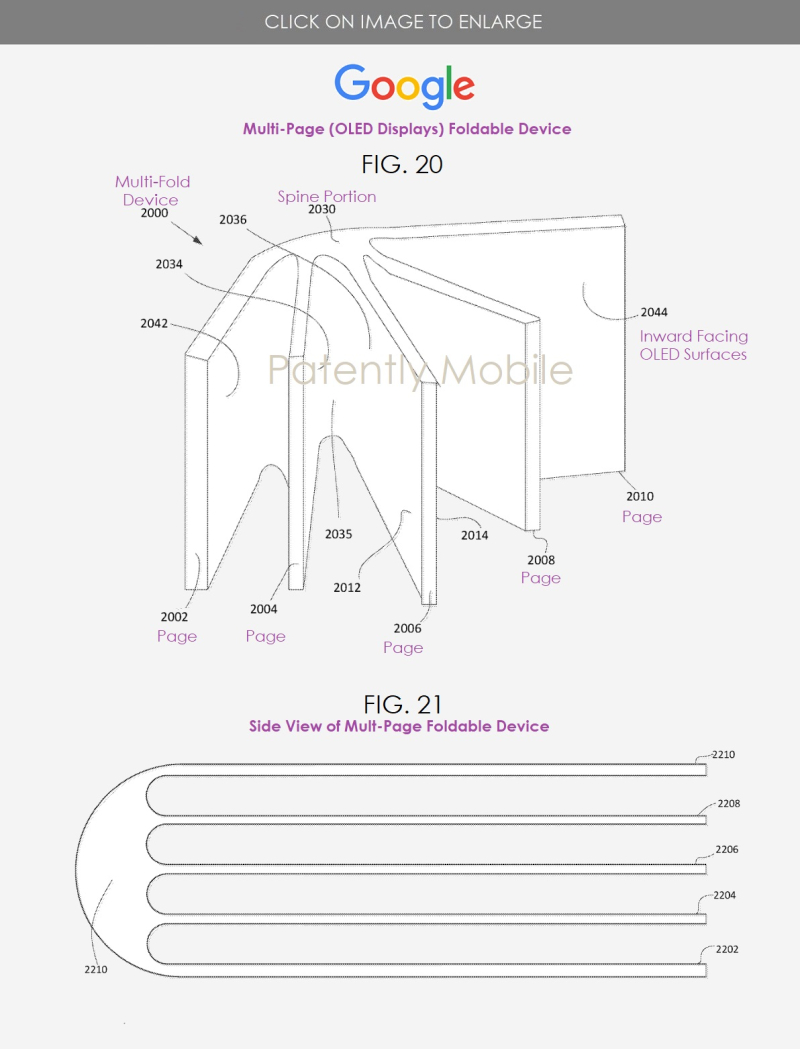 While Google's second and third foldable form factors acknowledge that they will provide a microphone, speakers and a camera, they never identify these two designs as smartphones and never provide wireless standards that would confirm that they are phones. More than likely, the designs are for a tablet and possible digital book.

Google's patent FIGS. 18 and 19 focus on the dual hinge mechanism. In one instance Google notes that "The hinge mechanism (#1820) can include a mechanical or electromagnetic stop mechanism that prevents the second straight section (#1806) of the foldable display from being unfolded into in the same plane as the first straight section (#1804) when the computing device (#1800) is in its unfolded configuration and no torques are applied to the hinge mechanism, other than torques due to gravitational forces on the elements of the computing device and forces that hold the device in a stationary position when resting on a flat surface in an unfolded configuration."

Google's patent application 20210034110 was published by USPTO on February 4, 2021. Being that this a patent application, the timing of such a device to market or even if they'll proceed with such devices in the future is unknown at this time.