Facebook needs to Hype the Narrative that they're the leader in Eyewear, present and future, as they prepare for the AR Revolution 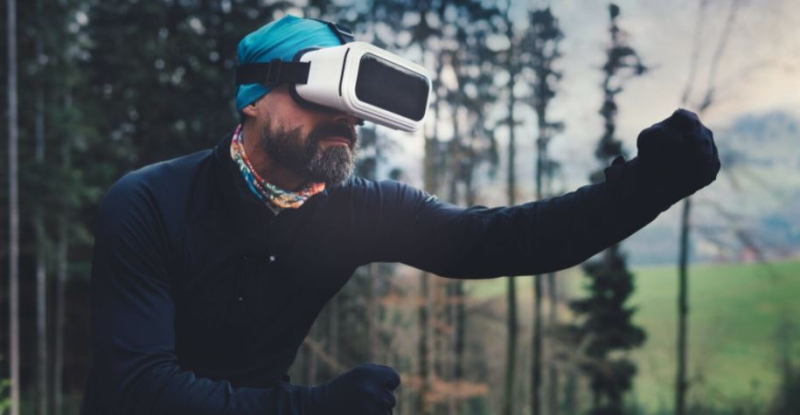 On Monday Patently Apple posted a report titled "Facebook's CEO Dreams aloud about Smartglasses offering an AR Teleportation Feature by 2030. You could also listen to the interview between Mark Zuckerberg and The Information's Alex Heath on a 47 minute podcast here.

In the big picture, why does AR and VR matter to Facebook?

Zuckerberg tells Heath that "we're primarily a social media company. The Holy Grail of social experiences is the ability to feel that you're present with another person. Nothing we have in technology today gets close to that with phones, computers or TVs. There's something magical about presence like you're there with another person and everything that goes into that psychologically. And that's what augment virtual reality will deliver, when they work well. That's why I'm so passionate about this."

Today, Facebook is reliant on Google's Android and Chrome along with Apple's iOS and macOS to bring their innovations to market. Facebook, has for years now, believed that delivering a winning device like next-gen AR glasses to market could allow them to create a platform to challenge both Android and iOS.

We covered this in more depth back in late 2019, in a report titled "Facebook has been working on Smartglasses to Replace Smartphones that includes a secret new OS to make it happen." A second report on this was posted last summer in-part titled "Facebook Reveals their Next-Gen Glasses with Holographic Lenses."

Facebook's reliance on iOS is driving Zuckerberg crazy. It's why he's part of lawsuit against Apple's anti-ad tracking software that's coming to market in the next few months. It's why he wants Facebook's future AR glasses to dominate the market.

Zuckerberg is betting the farm that they could beat Apple in the next platform revolution. And to that, Facebook via Oculus must remain the dominant headset player. However small today's VR headset market is, Oculus is clearly the leader.

Zuckerberg obviously wants to downplay Apple's eventual entry into the Mixed Reality headset market. Facebook is aiming to be the Android of headsets using the Razor and Blades business model.

It's true that Apple will shoot for the high-end of the headset market at start, just as they've done for Headphones via their new AirPods Max which is causing financial pain to their competitors in that space.

Apple's customer base is beloved by Apple developers because they're not afraid of paying a fair price for a good product. This is in contrast with Google's base of customers that generally want everything cheap. Bose, Sony and others that won over Apple fans by delivering quality over-ear headphones are beginning to lose those customers to AirPods Max.

Facebook knows that their leadership in the VR headset market could take a major hit when Apple steps into the ring with them. They won't beat Oculus on price, but they'll likely choke off a lot of profit at the higher end of the scale like they do with iPhones.

This is why Zuckerberg is going to continue to go on the offense against Apple's entry into this market that will start at a high price but likely, over time, have a family of headsets at varying price points like they do with iPhones and iPads.

Today a new Counterpoint report covers Facebook/Oculus in the Extended Reality (XR) headset market. Here we get to see Facebook's leadership in this space via Oculus and why Facebook want's to defend this lead.

Counterpoint's Research Analyst Karn Chauhan reports that "The Extended Reality (XR) headset shipments in 2020 declined 9% YoY. The decline was less than expected thanks to the Oculus Quest 2 performance during the holiday season. As a result, Oculus captured 53% of the XR market in 2020 as compared to 44% in 2019.

Commenting on the market dynamics, Research Director Peter Richardson said, "Virtual Reality (VR) headsets captured more than 90% of the total XR shipments. The adoption of VR, mainly for standalone form-factor, is increasing, as the industry is showing significant advancements in design, specifications and features at reasonable prices. 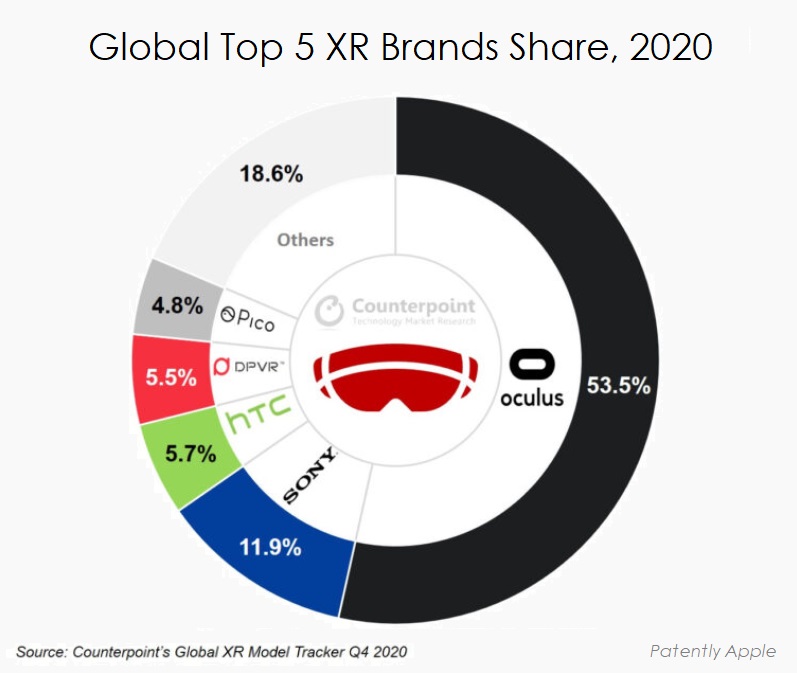 Commenting on brand performance, Senior Analyst Karn Chauhan said, "With a strong supply chain and brand value in the gaming segment, Oculus remained the biggest XR brand throughout 2020 by capturing half of the shipments."

The report further noted that Oculus also dominated the list of top five XR devices. Three headsets in the list were from Oculus. However, the competition in this segment will increase in the coming years. 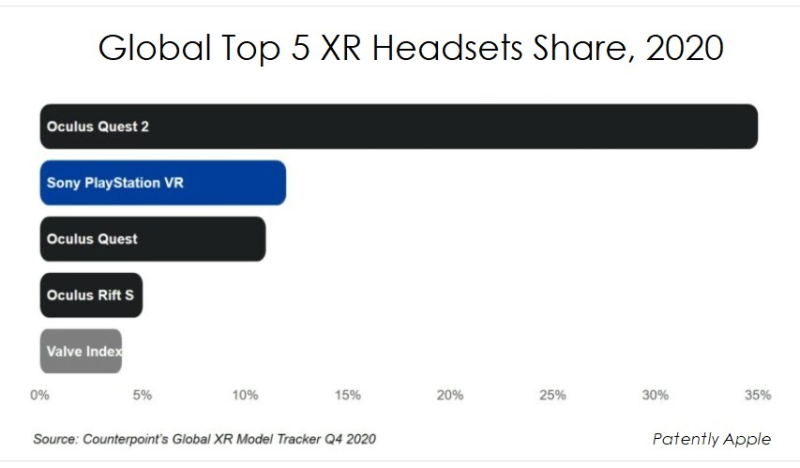 One of the reasons this segment doesn’t witness new launches as frequently as some other categories is that it is more dependent on latest innovations in the overall component and supply chain, especially from the form-factor, display, power and sensor perspective.

But the segment holds a big potential in the coming decade, as players like Apple and Sony (PSVR 2) will enter or scale up in this segment. For more read the full Counterpoint report.

While Facebook is banking on Augmented Reality glasses as being that vehicle that could challenge both Google and Apple, Apple isn't exactly asleep at the wheel. Apple has a huge base of patents on various aspects of their future headset systems going back years.

More importantly, Apple is prioritizing the coming AR Revolution. Just last January while in Ireland to receive an Award on behalf of Apple, CEO Tim Cook stated out of nowhere in his speech that Augmented Reality was the 'Next Great Thing.'

To be sure, Augmented Reality in its various forms will be one of Big Tech's next war fronts over the next decade. The good news for Apple fans is that a report posted this week by Ming-Chi Kuo claims that Apple's first headset could, if all goes well, hit the market late next year.