Home Archives Contact Us Subscribe Twitter MeWe Facebook Patently Mobile
Microsoft invents a Tablet, Notebook Accessory in the form of a 'Smart Backpack' for Students and Sports Enthusiasts
Negotiations to sell LG's Smartphone business have failed and shutting down operations may be the only option left to stop financial Losses 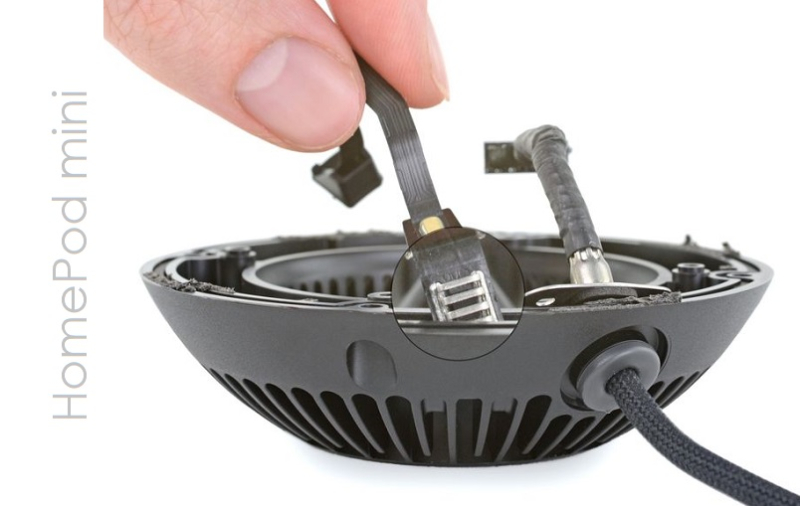 A new report today surmises that Apple launched their first-gen HomePod mini with a hidden feature that could activated by a simple software update. According to Bloomberg's Mark Gurman, the hidden feature is a sensor that could measure temperature and humidity.

Apple never disclosed this component and the device currently lacks consumer-facing features that use it. The company has internally discussed using the sensor to determine a room’s temperature and humidity so internet-connected thermostats can adjust different parts of a home based on current conditions, according to people familiar with the situation. The hardware could also let the HomePod mini automatically trigger other actions, say turning a fan on or off, depending on the temperature.

If Apple eventually enables the sensor, it would bolster a smart-home strategy that has sometimes lacked focus and trailed those of rivals. Amazon.com Inc.’s latest Echo speakers have temperature sensors, while Google’s Nest sells sensors that can be placed around homes and connect to its thermostats to adjust the temperature of each room.

The new capabilities would be a particular boon to an Apple software system called HomeKit that controls thermostats, lights, locks, plugs and other devices in the home. HomeKit works with fewer gadgets than similar software from Amazon and Google and Apple doesn’t make its own smart-home hardware beyond the HomePod and Apple TV streaming box. However, there are about 40 thermostats featured on Apple’s website that are compatible with HomeKit. For more on this, read the full Bloomberg report.

At present this is considered a rumor as Apple hasn't acknowledged that this component is for a future feature at this point in time. It's an interesting tidbit that may or may not pan out later this year.