Apple Watch surpassed the 100 million mark Worldwide in 2020 with 35% of iPhone users in the U.S. owning one A new report claims that more than 100 million people wear an Apple Watch. Based on estimates, Apple surpassed the important adoption milestone this past December. The Apple Watch has already helped usher in a new paradigm shift in computing, and Apple is still only getting started with what is possible on the wrist. New services designed specifically for Apple Watch (such as Fitness+) are being released. The wrist’s utility continues to be unveiled thanks to new hardware and software features revolving around health monitoring. 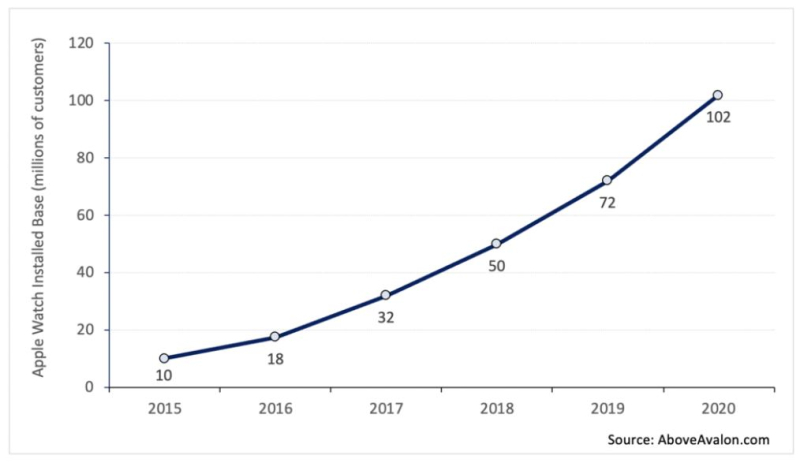 As of the end of 2020, approximately 10% of iPhone users were wearing an Apple Watch. This is a high percentage given the diverse technological wants and needs of those in the iPhone installed base.

Since the U.S. has been an Apple Watch stronghold for years, adoption in the country has trended materially high in comparison to global figures. At the end of 2020, approximately 35% of iPhone users in the U.S. were wearing an Apple Watch. This is a shockingly strong adoption rate that should serve as a wake-up call to Apple competitors interested in the wearables space.

At 100 million users, the Apple Watch is Apple’s fourth-largest product installed base behind the iPhone, iPad, and Mac.

Neil Cybart, the founder and author of Above Avalon, further noted that "Apple Watch turned Fitbit from a household name as the wearables industry leader into a company that will eventually be viewed as an asterisk when the wearables story is retold to future generations." Yet with Google acquiring Fitbit, that assertion could be overly optimistic.

If you're interested in learning more about Apple Watch statistics and potential insights, check out the full report by Above Avalon.