Today the U.S. Patent and Trademark Office officially granted Apple a patent that relates to lighting systems, and more specifically to a configurable transparent structure providing lighting capability primarily found in vehicles such as the sunroof or other window structures.

Transparent media, such as glass windows or panes, plexiglass panels, and the like, typically facilitate the largely undistorted passage of light to promote vision of objects while preventing other aspects of the environment (e.g., precipitation, wind, some sound) from passing through the media. Further, some newer types of transparent media technology, such as the various versions of "smart glass" now available, may be configured on-the-fly by way of a voltage selected by a user to allow the passage of varying levels and qualities of light, from transparent, to translucent, to opaque. Functional, aesthetic and other demands in countless areas ranging from automotive to architecture are exceeding the capabilities of conventional transparent media technologies.

One or more of the various embodiments described in Apple's granted patent may be employed in a vehicle, such as for use as a sunroof or other window-like surface to control the amount and nature of the light being provided within the vehicle. In automotive, architectural, landscaping and numerous other environments, embodiments may be used to provide lighting. 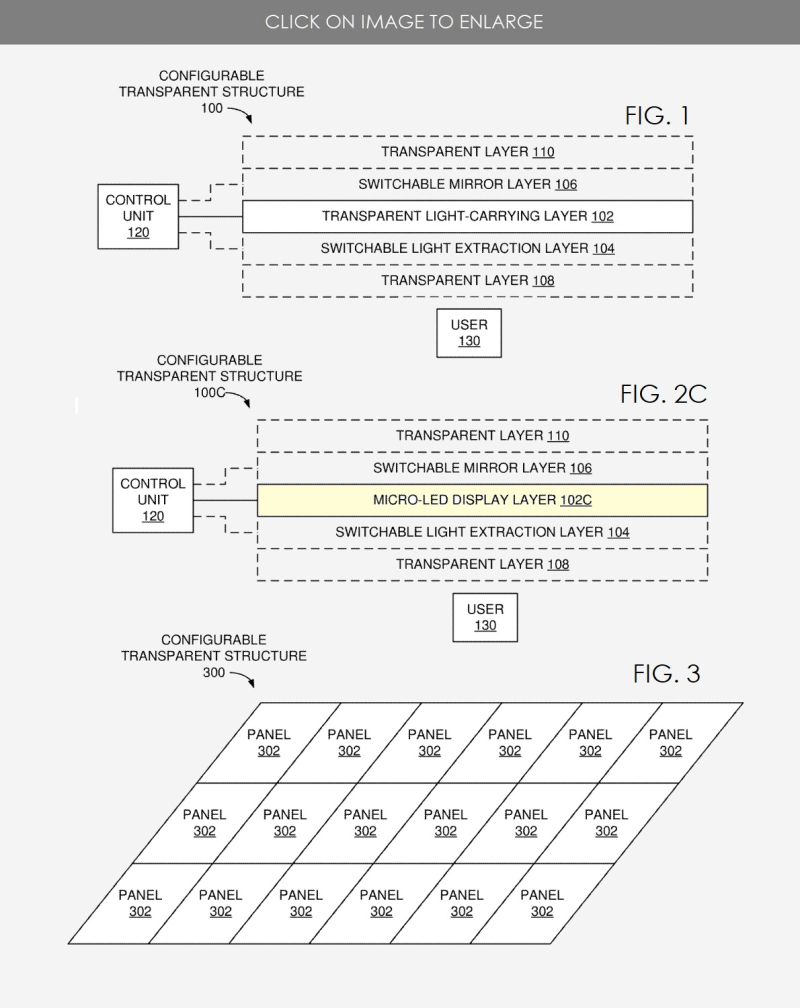 Apple's patent FIG. 3 above is an isometric-view representation of an example configurable transparent structure for lighting and/or display that includes multiple, individually controllable panels.

For example, some panels (#302 of FIG. 3) may include edge-lit light guide plate (LGP) may be used for focused task lighting or general lighting, while other panels may include a micro-LED display layer to provide relatively high-resolution display functionality, possibly in addition to lighting functionality.

In the future, a user may touch a particular panel glass panel shown in FIG. 3 of the configurable transparent structure to cause that panel (#302) to operate in a particular state to control in-vehicle audio levels, or recognize the driver or passengers via face recognition, to detect potential hazards or obstacles relative to a vehicle.

To review the technical side of the patent regarding configurable transparent structures, review Apple's granted patent 10,928,697.