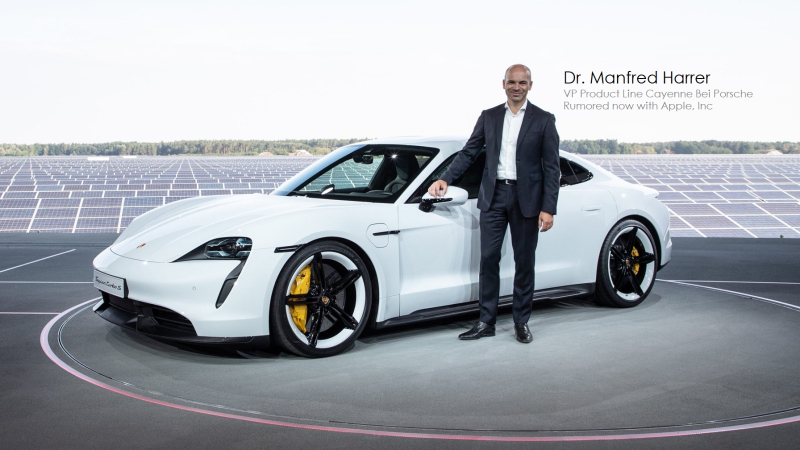 Patently Apple opened a 'Project Titan' Archive back in December 2017 as we began to recognize a consistent trend emerging that related to future electric vehicles that were semi and/or fully autonomous. 88 patents later, including two more IP reports posted just today (01 and 02), the press is finally taking the project seriously. A series of rumors have emerged since January and today, the biggest news to date has emerged in the form a a serious home run hire to take Project Titan to the next level.

According to several European reports including Germany's NewsABC.net research, Apple has hired the longstanding head of chassis development at Porsche to build their own car. Cayenne boss Dr. Manfred Harrer was considered one of the best engineers in the Volkswagen Group.

His Linkedin page that we reviewed this afternoon lists him officially as "Vice President Product Line Cayenne Bei Porsche AG. His list of overarching responsibility included:

Over his almost 14 year career at Porsche AG he held a series of positions prior to becoming Vice President Product Line Cayenne including:

Prior to Porsche AG, Dr. Harrer worked for the BMW Group for 7+ years and Audi AG for 2+ years.

The European report made the observation that the commitment of a chassis expert is a clear signal that Apple is developing a mobile pedestal for the iCar itself.

The spectacular change in personnel from Zuffenhausen to Silicon Valley has been quiet and quiet so far. At the end of last year, Harrer is said to have said goodbye to colleagues without revealing the reason. According to his LinkedIn profile, he is still employed by Porsche.

A former VW top manager stated for the report that "The American headhunting is amazing. Mr. Harrer was actually a hidden champion. Humanly a very calm guy, without any need for recognition. He is the measure of all things in his field."

Dr. Harrer’s salary was said to be in excess of $600,000 Euros per year at Porsche and industry experts estimate that Apple will be paying him north of a million per annum. For more, read the full report by European site NewsABC.net research.

For the record, there's been no change in Dr. Harrer's LinkedIn Page acknowledging a move to Apple as of February 02, 2021.  Should Dr. Harrer's LinkedIn page be updated to confirm the hire, then Apple has hired a (PhD) Mechanical Engineer that has the kind of experience and depth that could put Project Titan into action and on a production line over time.