Home Archives Contact Us Subscribe Twitter MeWe Facebook Patently Mobile
Season 2 of the Apple TV Series 'Servant' begins today with only a single episode available: Boo!
With PC Sales on Fire in Q4, Apple plans to keep the Momentum Humming with newly redesigned MacBooks and iMacs on the way

While Apple's CEO's Full Interview on Fox will Air this Sunday, Clips of the interview don't provide Clarity on the Parler Suspension 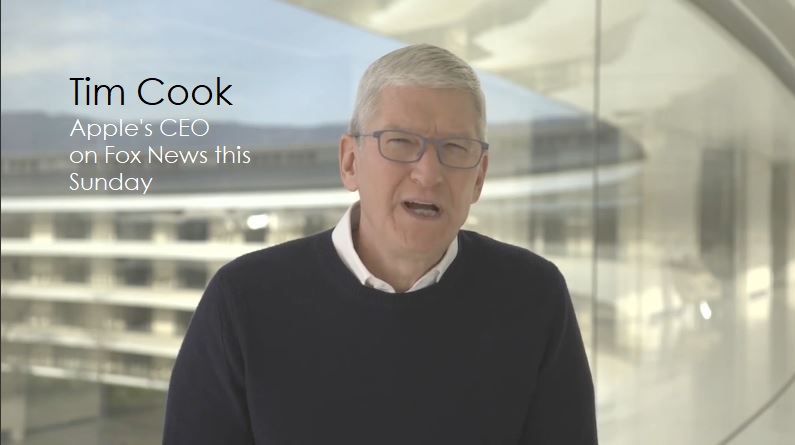 Apple's CEO is to appear on 'Fox News Sunday' with Chris Wallace. The clips from the pre-taped interview indicate that one of the key topics will cover Apple's suspension of Parler and Big Tech censorship.

Cook was asked how Apple decides to balance free speech with "objectionable content", and whether it was pushing people and views underground by removing Parler from the App Store. Below is Tim Cook's response in-part could be found in two Fox clips as presented below from Fox News Sunday.

The full interview will air on Fox News Sunday.

Hopefully Apple's CEO will further explain what terms and services specifically Parler violated. In part Cook pointed to the promotion of violence on Parler. Yet Facebook has been struggling with violence and hate speech on their platform from day one. Brutal violence at that including live beheadings. Apple never "suspended" Facebook over a moderation problem at any point.

In a recent article in The New Yorker titled "Why Facebook Can’t Fix Itself," they wrote:

"It is possible that Facebook, which owns Instagram, WhatsApp, and Messenger, and has more than three billion monthly users, is so big that its content can no longer be effectively moderated. Some of Facebook’s detractors argue that, given the public’s widespread and justified skepticism of the company, it should have less power over users’ speech, not more."

In the end, the EU and the US are considering breaking up the App Store for having too much control over the market. This recent show of power over the Parler platform isn't going to do them any favors.