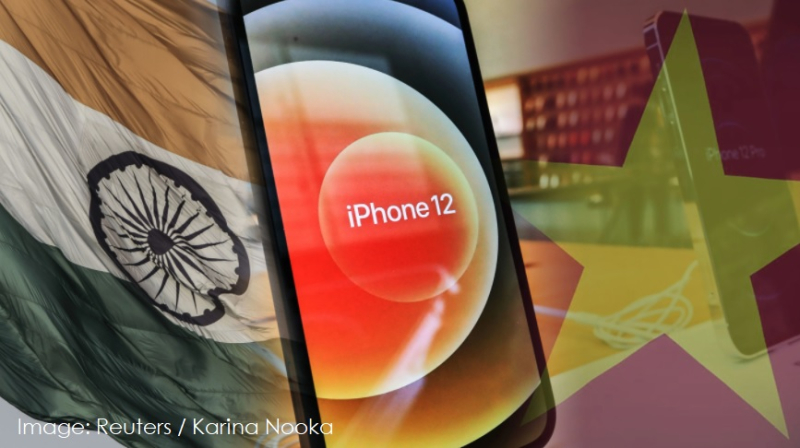 Over the last four months Patently Apple has posted three reports on Apple moving production of products out of China to India, Taiwan, Vietnam and elsewhere covering Phones, iPads, Macs and wearables (01, 02 and 03). Today, Nikkei Asia has learned a few extra details that reveal more about Apple's production diversification plan.

A new Nikkei Asia report states that "iPad production will begin in Vietnam as early as the middle of this year, marking the first time that the world's biggest tablet maker will build a significant number of the devices outside of China.

Apple is also stepping up iPhone production in India, its second-largest production base for the iconic device, sources added, with plans to start producing the latest iPhone 12 series -- the company's first 5G smartphones -- there as soon as this quarter.

Apple is also increasing production capacity for smart speakers, earphones and computers in Southeast Asia as part of its ongoing diversification strategy, the sources added.

In Vietnam, Apple is mobilizing suppliers to expand production capacity for the latest HomePod mini, the affordable version of its voice-activated smart speaker lineup. The device has been produced in Vietnam since it was introduced last year. The Cupertino-based tech giant has already increased local production of its audio-related products, including its various AirPods lineups, sources said.

Apple has relocated some production of the Mac mini, one of its desktop computers, to Malaysia, another person familiar with the matter told Nikkei, and the company is also set to move a part of its MacBook production to Vietnam this year. Most of its computer production remains in China."

One supply chain manager told Nikkei Asia that "Apple and many other tech companies that all want out-of-China production capacities, and that has not slowed even though the U.S. has a new president. The suppliers are studying not only peripheral products. Apple, for example, aims to build capacity in new locations -- mostly Southeast Asia nations -- for multiple core products, such as iPhones, iPads, MacBooks, AirPods and others. It was hard to imagine that two years ago, but now, nothing is impossible to shift."

The Nikkei Asia report further noted that "Apple's moves are part of a larger trend of global tech giants reducing their production dependence on China, long known as the world's factory. The country's rising labor costs, the prolonged trade tensions between Washington and Beijing and the outbreak of the coronavirus pandemic that severely disrupted the supply chain have all driven home the risks of depending too heavily on one country. The U.S. government, moreover, has initiated a 'supply chain restructuring' campaign and urged tech suppliers to move away from China."

For more on this, read the full Nikkei Asia report.