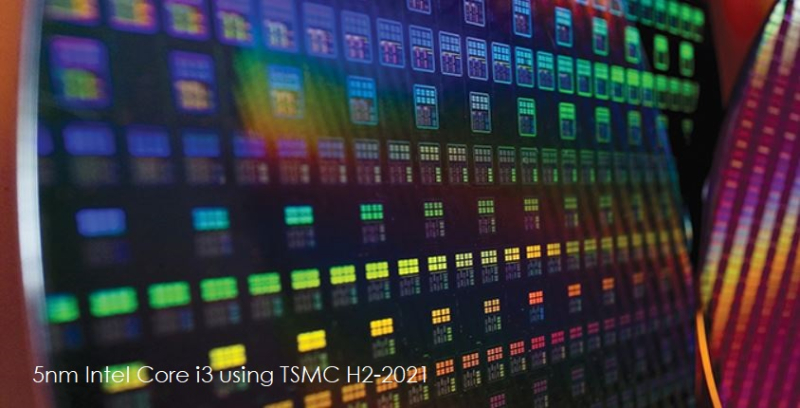 Earlier today Intel announced the return of Pat Gelsinger, their former Chief Technology Officer, as the new CEO of Intel beginning on February 15. He's returning to Intel at a time of great turmoil and challenges. Intel's new CEO will be hitting the ground running with news that Intel is outsourcing to TSMC that is planning to kick off mass production of their Core i3 CPUs at TSMC’s 5nm node in 2H21. Intel’s mid-range and high-end CPUs are projected to enter mass production using TSMC’s 3nm node in 2H22, according to a new TrendForce report.

AMD has already been outsourcing its CPU production to TSMC and the move has progressively threatened Intel’s PC CPU market share. Furthermore, Intel lost CPU orders for the MacBook and Mac Mini, since both of these products are now equipped with Apple Silicon M1 processors, which were announced by Apple last year and manufactured by TSMC.

Even Microsoft has hinted that they too may use custom designed ARM chips like Apple does that could further hurt Intel and with Qualcomm acquiring Nuvia today, that brings onboard Apple's one-time mastermind architect, the temptation will even be greater.

In fact, "Panos Panay, Microsoft’s chief product officer, commented on the Qualcomm's acquisition this way: "It’s exciting to see Nuvia join the Qualcomm team. Moving forward, we have an incredible opportunity to empower our customers across the Windows ecosystem." This is a nightmare for Intel.

In recent years, Intel has experienced some setbacks in the development of 10nm and 7nm processes, which in turn greatly hindered its competitiveness in the market. With regards to smartphone processors, most of which are based on the ARM architecture, Apple and HiSilicon have been able to announce the most advanced mobile AP-SoC ahead of their competitors, thanks to TSMC’s technical breakthroughs in process technology.

TrendForce believes that increased outsourcing of its product lines will allow Intel to not only continue its existence as a major IDM, but also maintain in-house production lines for chips with high margins, while more effectively spending CAPEX on advanced R&D.

Intel's never ending 7nm and even 10nm chip delays over recent years hurt the entire Wintel ecosystem and so Gelsinger certainly has his work cut out to regain the trust of Wintel partners going forward. In respect to Apple, that ship has sailed as all mainstream Macs will be transitioning  to their own silicon over the next two year and that's likely to never be reversed.