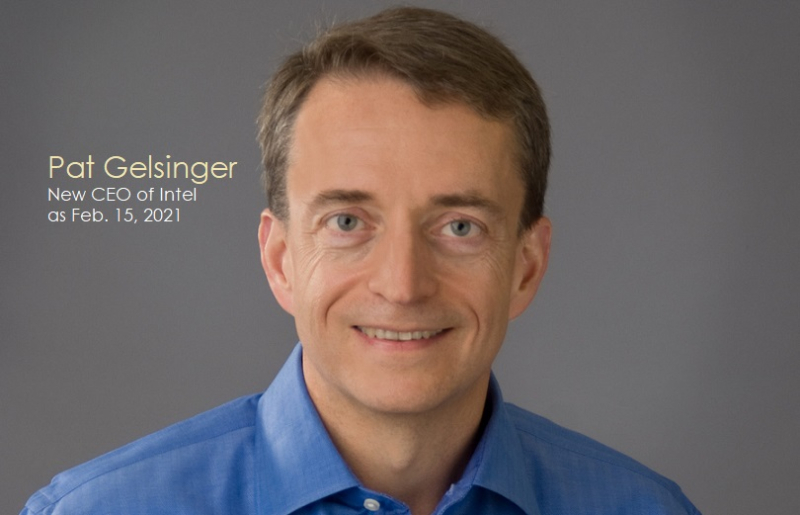 After being passed over for CEO, Pat Gelsinger who was Chief Technology Officer of Intel Corporation and Senior Vice-president and General Manager of the Digital Enterprise Group at Intel left in 2009. Today, Intel announced that its board of directors has appointed 40-year technology industry leader Pat Gelsinger as its new chief executive officer, effective Feb. 15, 2021. Gelsinger will also join the Intel board of directors upon assuming the role. He will succeed Bob Swan, who will remain CEO until Feb. 15.

Intel has made strong progress on its 7nm process technology and plans on providing an update when it reports its full fourth-quarter and full-year 2020 results as previously scheduled on Jan. 21, 2021.

Gelsinger is a highly respected CEO and industry veteran with more than four decades of technology and leadership experience, including 30 years at Intel where he began his career.

Statement by Omar Ishrak, independent chairman of the Intel board: "Pat is a proven technology leader with a distinguished track record of innovation, talent development, and a deep knowledge of Intel. He will continue a values-based cultural leadership approach with a hyper focus on operational execution. After careful consideration, the board concluded that now is the right time to make this leadership change to draw on Pat’s technology and engineering expertise during this critical period of transformation at Intel. The board is confident that Pat, together with the rest of the leadership team, will ensure strong execution of Intel’s strategy to build on its product leadership and take advantage of the significant opportunities ahead as it continues to transform from a CPU to a multi-architecture XPU company."

Statement by new CEO Pat Gelsinger: "I am thrilled to rejoin and lead Intel forward at this important time for the company, our industry and our nation. Having begun my career at Intel and learned at the feet of Grove, Noyce and Moore, it’s my privilege and honor to return in this leadership capacity. I have tremendous regard for the company’s rich history and powerful technologies that have created the world’s digital infrastructure. I believe Intel has significant potential to continue to reshape the future of technology and look forward to working with the incredibly talented global Intel team to accelerate innovation and create value for our customers and shareholders."

Statement by Bob Swan, Outgoing CEO: "My goal over the past two years has been to position Intel for a new era of distributed intelligence, improving execution to strengthen our core CPU franchise and extending our reach to accelerate growth. With significant progress made across those priorities, we’re now at the right juncture to make this transition to the next leader of Intel. I am fully supportive of the board’s selection of Pat and have great confidence that, under his leadership and the rest of the management team, Intel will continue to lead the market as one of the world’s most influential technology companies.”

Most recently, Gelsinger served as the CEO of VMware since 2012, where he significantly transformed the company into a recognized global leader in cloud infrastructure, enterprise mobility and cyber security, almost tripling the company’s annual revenues.

Apple introduced the M1 processor in November with the goal of being Intel free within two years. Today Qualcomm announced their acquisition of Nuvia which is lead by the former mastermind behind Apple's A-Series processors. Qualcomm is preparing to dive even deeper into the PC market while hoping to advance their smartphone processors to better compete with Apple's advanced Bionic processors.

Clearly Intel had to shake things up and bringing back Intel veteran Pat Gelsinger as CEO could be the foundation to at least mark a meaningful turning point.